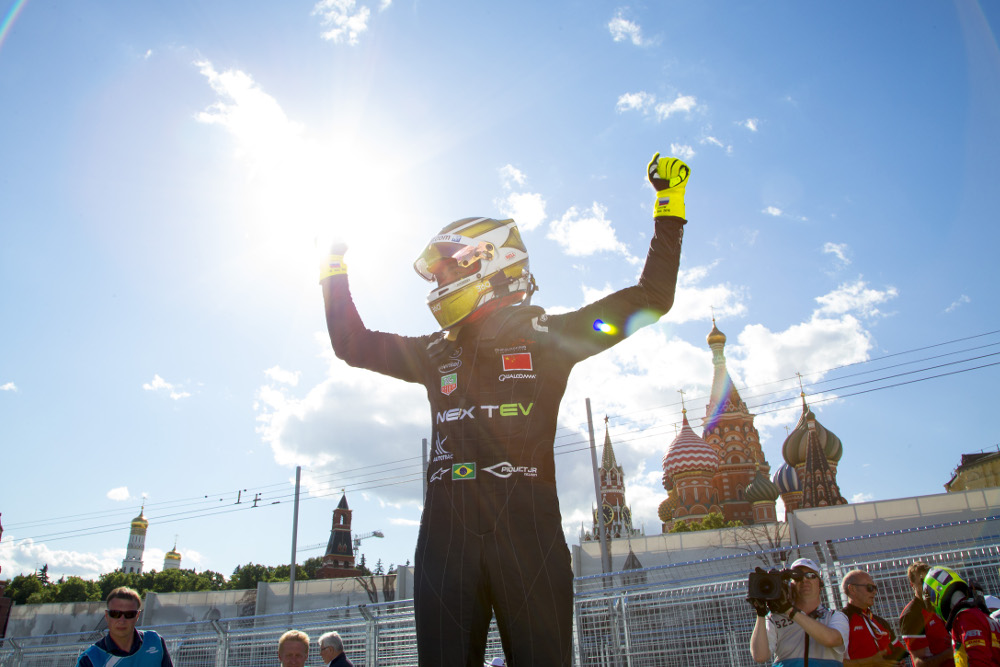 MOSCOW, RUSSIA: Nelson Piquet Jr. triumphs in the shadow of the Kremlin to extend title lead.

This afternoon, the Brazilian won the first ever Moscow ePrix, thus making a significant step forward in his fight for the title. The NEXTEV TCR driver picked up 25 points, which means he will arrive in London for the grand finale with a lead of 17 points (128 to 111) over his closest rival, fellow countryman Lucas di Grassi. The Audi Sport ABT driver finished second ahead of Buemi but was later relegated to ninth because of a penalty for an unsafe release after his pit stop. The Swiss driver is now third in the championship on 105 points. After the race, the trophy for third place therefore had to be passed along the pitlane to the Venturi garage, with Nick Heidfeld securing a top three finish in an ePrix for the very first time.

The decisive moment of the race actually came just moments after the start. Jean-Eric Vergne started from pole position, but he did not get off the line that well when the lights went out: Piquet Jr, second on the grid, made the most of it to pass the Frenchman and arrive at the first corner braking area in the lead. From then on, the Brazilian soon built up a few seconds’ advantage on the chasing group, made up of Vergne, di Grassi and Buemi, which meant he was able to comfortably manage his first stint. Behind him, di Grassi appeared to have a bit more pace than Vergne, but was never able to find a way past, while Buemi held back, ready to pounce on any opportunity.

Therefore, it was a case of waiting for the run of pit stops to see if there would be any change at the top of the order. The leader was the first man in, with Vergne and di Grassi pitting one lap later, with Buemi going for a shorter second stint, making his stop on lap 19. Unfortunately for the Swiss driver and for his team-mate Prost, a mistake by the team, relating to the minimum time for the pit stop, lost him precious time, although he was still in fourth place. However, a further mistake, an unsafe release, came at an even higher price with a post-race penalty.

The start of the second stint saw Piquet Jr. still in the lead, while Vergne and di Grassi swapped places. The Brazilian knew he could count on a greater energy reserve than his fellow countryman and tried to close the gap, hoping to find a way past in the closing stages. The gap came down to around 1.5s, however the Audi Sport ABT driver was not able to get into the leader’s slipstream, partly because his battery was overheating, which meant he couldn’t go flat out in the final laps. Piquet Jr. was thus first past the flag with a 2 second lead, thereby adding a second victory to the one he scored in Long Beach to make it five appearances on the podium this season.

“It’s very important to come to London leading the championship," said the NEXTEV TCR driver after the race. “We know that we cannot afford to make any stupid mistakes and we will have to work as well as we have done so far, when it comes to the double-header in Battersea. We have always gone well in qualifying and I demonstrated that I had a good race pace, with the exception of Berlin, but here we ran as strongly as we had done in the previous ePrix."

Even though the gap to the leader has now grown to 17 points, di Grassi definitely does not think the battle is over. “There are 60 points up for grabs and anything can still happen. Today we showed that we have a very quick car."

In the fight for third place, Buemi got the better of Vergne in amazing fashion. Having put in a series of quick laps to close on the Frenchman, on the very last lap, the Swiss driver launched the decisive attack, also making the most of the FanBoost: the two cars collided several times with Buemi also cutting the chicane, which allowed Heidfeld to close on them both. At the hairpin, the German slipped between the two of them, relegating Vergne to fifth. The Frenchman was left with the consolation prize of setting the fastest race lap, which was then taken off him, after the race, as he was deemed to have set the time on a lap in which he had cut the chicane, so that the 2 points for the fastest lap went to Buemi.

Also in the points were Daniel Abt, Salvador Duran, Antonio Felix da Costa, Nicolas Prost and, behind the penalized Buemi, the newcomer Justin Wilson. Not much joy for the Dragon Racing team after the glories of Berlin, with D’Ambrosio dropping to the back after a problem at the pit stop and Duval finishing eleventh.

Having travelled the world, Formula E now prepares to head home to England, where it all started with the test session at Donington Park last summer. The season finale will take place in London on a circuit built in Battersea Park. There will be two races over the final weekend of June, with one on Saturday 27th and the other on Sunday 28th. Six drivers are still in the hunt for the title – Piquet Jr, Buemi, di Grassi, Prost, D’Ambrosio and Bird, while in the teams’ championship, e.dams-Renault will arrive in the English capital with 187 points to their name, 44 more than Audi Sport ABT, while NEXTEV TCR is third on 132.