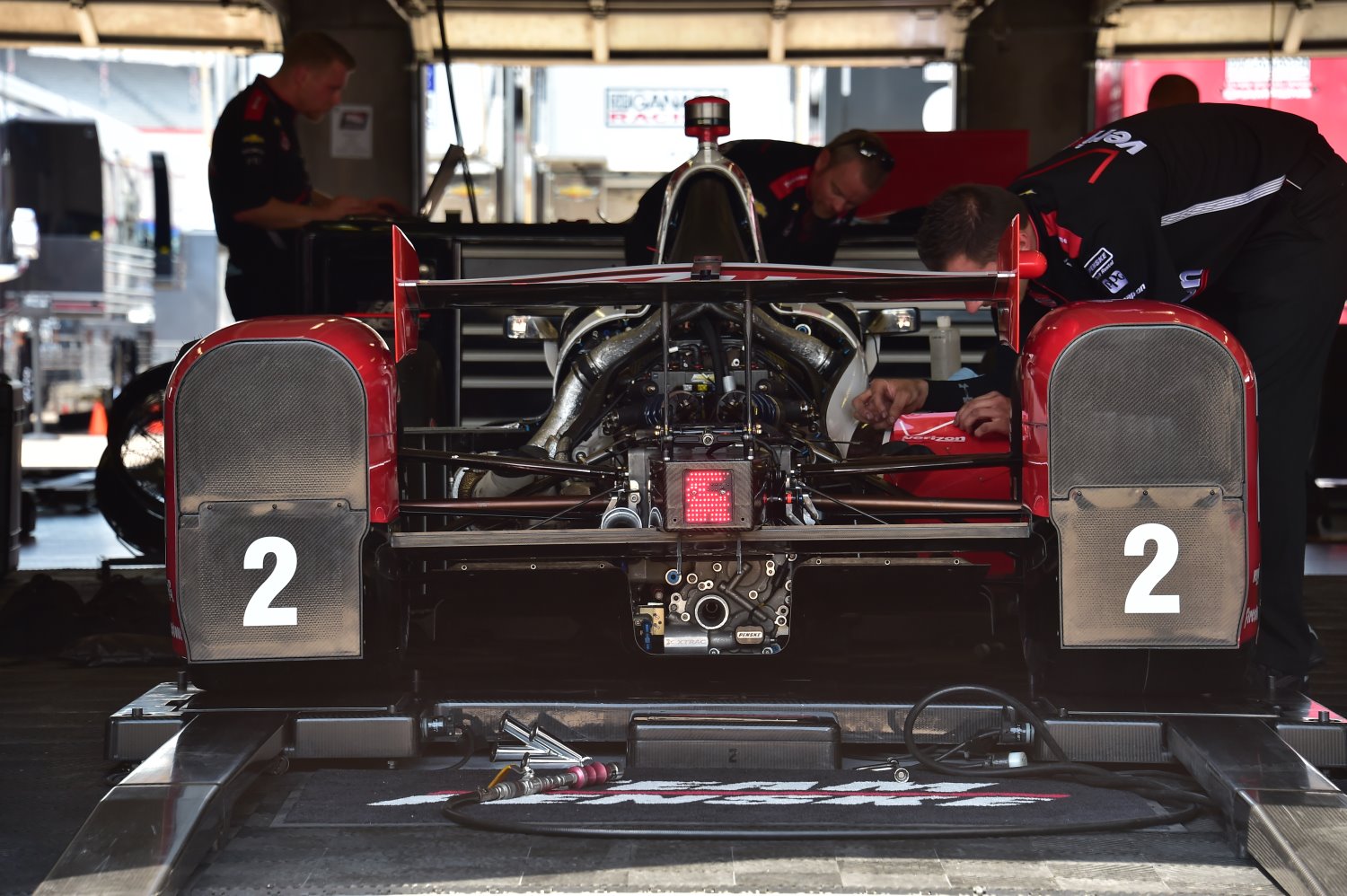 With another new and untested aerodynamic configuration on its cars, the Verizon IndyCar Series heads to Texas Motor Speedway, arguably its most dangerous track, for Saturday's Firestone 600.

Because it's the first time this aero configuration has ever been used, we won't know until after the 248-lap race on Saturday night if the changes produced the desired effect.

The reaction of a crashed car running the Texas aero package was put to the test very quickly on Friday, as Ryan Hunter-Reay crashed his Andretti Autosport Honda about halfway through the first practice session. Hunter-Reay was uninjured, but his No. 28 car sustained extensive left side and rear damage.

"It was just a big surprise," said the 2012 IndyCar Series champion. "I got up there in dirty air, and the rear just came around."

Hunter-Reay was diplomatic, but he pointed out the fact that the Texas aero package was completely untested until the cars rolled out for practice on Friday morning.

"We're testing and trying some things, but it was our first race simulation run, so I can't say what happened," he said. "It was a complete surprise."

Hunter-Reay's Honda spun at the exit of Turn 2 but TMS' 24-degree banking helped slow the car before it struck the SAFER Barrier. The car never looked in position to take flight like the Chevrolet-bodied cars of Helio Castroneves, Josef Newgarden and Ed Carpenter did at Indianapolis following much higher speed impacts.

1.5-mile speedway on the IndyCar Series schedule, so it requires its own unique aero package. Striking the right balance of downforce, tire grip and fall-off at this track has proven tricky for the series.

The pressure is even greater this year in the wake of a dramatic month of May at Indianapolis where fears raised by three airborne crashes in practice went unfounded and the drivers produced a clean and exciting race. Indy was a great race, and Texas has the potential to be as good or better if IndyCar gets the car setup parameters right.

One significant change introduced at Texas that will be used at all ovals moving forward is the bumper pods mounted behind the rear wheels must be sealed with blanking plates front and rear. Series officials believe that air flowing through the bumpers when crashed cars were traveling backward at high speeds was a potential cause of the tendency for cars running Chevrolet bodywork to get airborne.

"This has been a collaborative effort with both manufacturers and they have been working on these since Indianapolis 500 qualifications," said Will Phillips, IndyCar's vice president of technology. "These closure panels serve as a blocker so air cannot flow through the rear-wheel guards. This will ultimately raise the point at which cars would experience lift when traveling backwards."

Although all cars are required to use the same rear wing main plane within a specified range of angle, Chevrolet and Honda have developed unique rear wing end plates. Each manufacturer's aero kit also includes winglets that can be run or removed as each driver determines the level of downforce they are most comfortable with.

With the new-for-2015 aero kits and the mandated rear-wing angle, total downforce in Texas specification is slightly increased this year, which should make the racing closer and more competitive.

But just like at Indianapolis, IndyCar is sending its drivers out as real-world test pilots to correlate and confirm that Honda and Chevrolet's computer and wind tunnel generated designs work as intended.

"These guys are getting a lot of new pieces thrown at them with no testing," Andretti said. "Everyone is experimenting, and everybody is making a lot of educated guesses at the moment. They have no data to go by.

"I'm slightly confused with all the pieces they have on there, but the cars look fairly comfortable in race trim," he added. "Hopefully the drivers can keep their heads together and have a clean race."

Hunter-Reay suffered the only drama in the first practice session as Team Penske's Simon Pagenaud posted the fastest lap at 216.172 mph.

Chip Ganassi Racing's Tony Kanaan was fourth fastest in practice at 215.685 mph. He said he couldn't feel any benefit from the downforce added this year.

"It's definitely slippery out there, but it should be better when it cools off at night," he remarked.

"Should be better" is the theme for IndyCar at Texas in 2015. But just about everything is unknown. Under pressure from TMS president Eddie Gossage, IndyCar knows the racing needs to be better at one of its marquee tracks. But will it be?
Pack racing for open-wheel cars was invented at Texas in 1997. It was breathtaking to watch, but too close for comfort at times, and steps were finally taken to spread the cars out a bit in the interest of safety.

Of course that resulted in people complaining that the racing wasn't close enough. The last photo finish at TMS came when Sam Hornish Jr. triumphed for Team Penske in 2007, and the second-place car wasn't even within sight when the winner crossed the line in two of the last three years.

Will this year's tire and aero specification strike a happy balance?

"It's going to be a tricky, tricky race," said Graham Rahal, who lies fifth in the IndyCar standings and is Honda's top runner in 2015.

"The tires fall off quickly, and that's going to be difficult. For me, the tires last about two laps so you're really going to have to take care of them, even in qualifying. A lot of guys are having trouble keeping a handle on the rear of the car.

"Some of the Chevy guys think there's going to be pack racing tomorrow night, but no way," Rahal added. "It's way too difficult for that. I think you'll see a ton of passing. Some guys will be quick at the start of a run, and others will be quick at the end. That's what will make this race interesting."

Did IndyCar get it right? We'll find out soon enough. John Oreovicz/ESPN