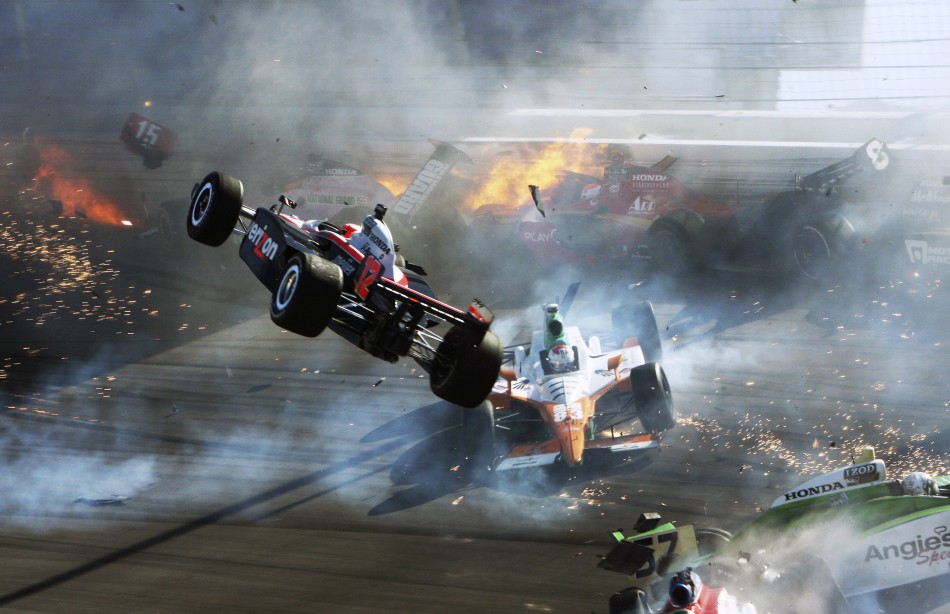 “He was walking about this high off the ground," Gossage says, motioning at knee length.

It was June 11, 2000, and Unser had just completed the Casino Magic Texas 500, his first race at the 1.5 mile-oval competing in the Indy Racing League.

Unser grabbed Gossage by the shoulders.

“That’s the greatest race I’ve ever run in my life!" proclaimed Unser, who had finished third.

“It was the greatest race!"

Fifteen years later, Gossage talks with media members at Joe T. Garcia’s, a Mexican restaurant on the north side of Forth Worth that’s hosting an event for Indianapolis 500 winner Juan Pablo Montoya.

Gossage makes the point of his story clear.

Gossage didn’t have to send the email. It was a courtesy. In fact, he could have sent it sooner.

He could have sent it after the first car went airborne. Or the second. Or the third. He would have been justified in sending it after a crash put James Hinchcliffe in the hospital.

A day or two after the conclusion of the Sunday’s Indianapolis 500, Gossage finally sent the email, directed to IndyCar president of competition and operations, Derrick Walker.

The purpose of the email? First, to ask what IndyCar is planning with the new superspeedway aero kit it is bringing to Texas for next weekend’s Firestone 600 after a Month of May that saw four straight days of high-profile practice incidents, but ultimately a safe running of the “500."

“I also reminded him we needed a more competitive race than we had last year, "Gossage says. “If you remember, Derrick is the one that said it wasn’t the best race we’ve ever seen. He was honest about that. It wasn’t a very good race last year."

Last year’s Texas race, won by Ed Carpenter, is noteworthy for its lack of noteworthy racing. While Carpenter won, the 248-lap race was led by Will Power five times, including stretches of 56, 39 and 45 laps. Carpenter led 90 laps, including all but one of the final 67.

The race, which had 11 lead changes was slowed by three cautions, two of which were for stalled cars.

It was a stark difference from the days of pack racing that defined open-wheel racing at Texas up until 2013. It was the kind of racing that produced the 2001 Chevy 500, a race with 32 lead changes that ended with Sam Hornish Jr. edging Scott Sharp and Robbie Buhl by .019 seconds in a three-wide finish.

Gossage claims that race as his favorite held at his track, including any NASCAR events.

But with questions surrounding how reliable the superspeedway aero kits are at this point, safety is an issue at a track where the average speed was 178.301 mph in 2014. But Gossage doesn’t anticipate any drastic changes to the aero kit for the June 6th race.

“The first thing you should always do when you run into a problem with a race car is slow down and they slowed the cars down, just a little bit," Gossage said of the issues in Indianapolis. “That was the right thing to do and I’m sure they’re figuring out what the best fix is for us. Speeds are going to be a little bit slower, but not much. I’m sure they’re focusing on that too."

Gossage made a point that in all the years of pack racing at Texas there was just “one accident of note."

That accident was the 2003 crash involving Kenny Brack that broke the Swedish driver’s sternum, a femur, crushed his ankle and shattered his back.

But Gossage wants to work with Walker and IndyCar in any way he can to get the racing at Texas back to level of excitement that had a two-time Indianapolis 500 winner “beside himself."

“Let me first say, it’s hard to deal with the sanctioning body. Period," said Gossage, adding the frustration of having to balance interests of competitors, tire providers, the fans and the TV audience. “The bottom line is that race last year, by IndyCar’s own admission, wasn’t good enough. That had to do with aerodynamics and that’s not something I can change. I’d be happy to if they’d let me. It’s on them to fix it and I have great faith they will. Or the fireworks show afterward will be really fun."

“They know they need to do something about it," Gossage continues. “I didn’t need to (send the email). It’s not like he’s going ‘oh, heck. I forgot about that.’ You always want them to know you’re paying attention."

But don’t think that Gossage and Walker have anything less than a respectful work relationship. They’ve known each other since both were with Team Penske, when Gossage worked as the PR man for Danny Sullivan in 1985, and Walker was the crew chief on the car that won the Indianapolis 500.

“I like him a lot," Gossage says. “Like anybody in the sport, you don’t necessarily agree on all things."

Sometime after last year’s Texas race and Walker admission, the Scotsman got in contact with Gossage.

“We’re good enough friends that I can remember sitting sat lunch with him after that. He was good enough to come down and have lunch at the Speedway Club. I didn’t ask him, he came. He called me and said, ‘I’m coming to see you,'" Gossage recalls. “There were things we agreed about and things we didn’t agree about and that’s OK. Derrick’s a good guy. He wants to get it right. I have faith.