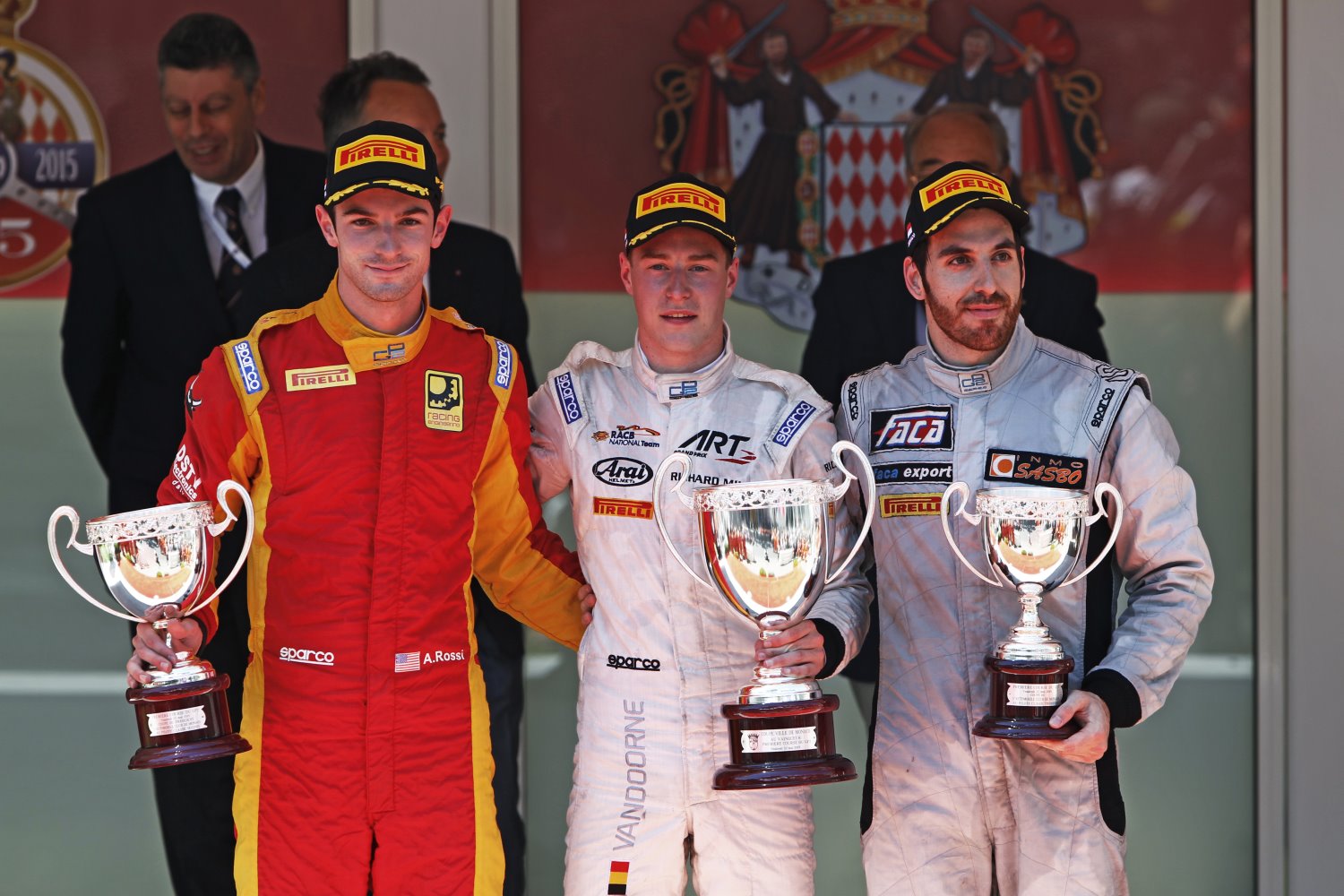 McLaren tester Stoffel Vandoorne has claimed his third victory of the season in the most glamorous of surroundings, implementing the perfect strategy to win the feature race this morning in Monaco ahead of Alexander Rossi and Sergio Canamasas.

The Belgian had to wait for his moment, jumping the American in the pits to switch positions during a race-long battle between the pair, as well as manage the challenge of the others around them. At the start it was Raffaele Marciello who was in the pound seat, using his soft tires to jump poleman Rossi into Ste Devote, while Vandoorne tried but failed to get past the soft shod Arthur Pic, making do with P4 ahead of Jordan King, Sergey Sirotkin, Julian Leal and Canamasas as the field headed up the hill towards Casino.

The question on everyone’s mind was how long with the softs last around the principality, and the answer came soon: Marciello was into the pits on lap 9, Pic one lap later, and at the front the order was now Rossi, Vandoorne, Sirotkin, Leal, Canamasas and Richie Stanaway as they tried to build a lead over Pic, who in P9 was first on track of those who had already stopped, looking to build a gap before their own stops.

On lap 20 a virtual safety car was declared while the marshals removed Mitch Evans’ broken car at the new chicane, the result of a collision with Nick Yelloly, and the front men took the bait, jumping into the pits to gamble on being able to run on their softs for another 20 laps. Vandoorne jumped Rossi in the pits for the lead of the race, Leal collided with Sirotkin as he exited with both men continuing, and as the race went live the order at the front was now Vandoorne, Rossi, Leal, Pic, Canamasas and Sirotkin.

The Spaniard used his new tires to great effect, jumping Pic with a lovely move inside at Ste Devote after another VSC period for debris, with the pair now in battle for third after Leal was handed a 10 second time penalty for the pitlane incident. But all eyes were on the battle for the lead, with Rossi having to use more of his soft tires to try and regain the lead, all the time balancing the need to help them get to the end of the race.

In the final few laps the battle was lost, with the American dropping off to limp home six seconds behind Vandoorne, who punched the air with delight at his great victory. Leal finished third on track but dropped back to P6 in the results, behind an overjoyed Canamasas who held Pic at bay despite degrading tires for the final podium position, and Sirotkin, who put in a tremendous drive for his best GP2 result in P5. Stanaway held off Marciello for P7, while King and Yelloly claimed the final points paying positions towards the drivers’ title fight, which is led by Vandoorne on 111 points ahead of Rossi on 68, Rio Haryanto on 49 and Evans on 28 ahead of tomorrow afternoon’s sprint race.