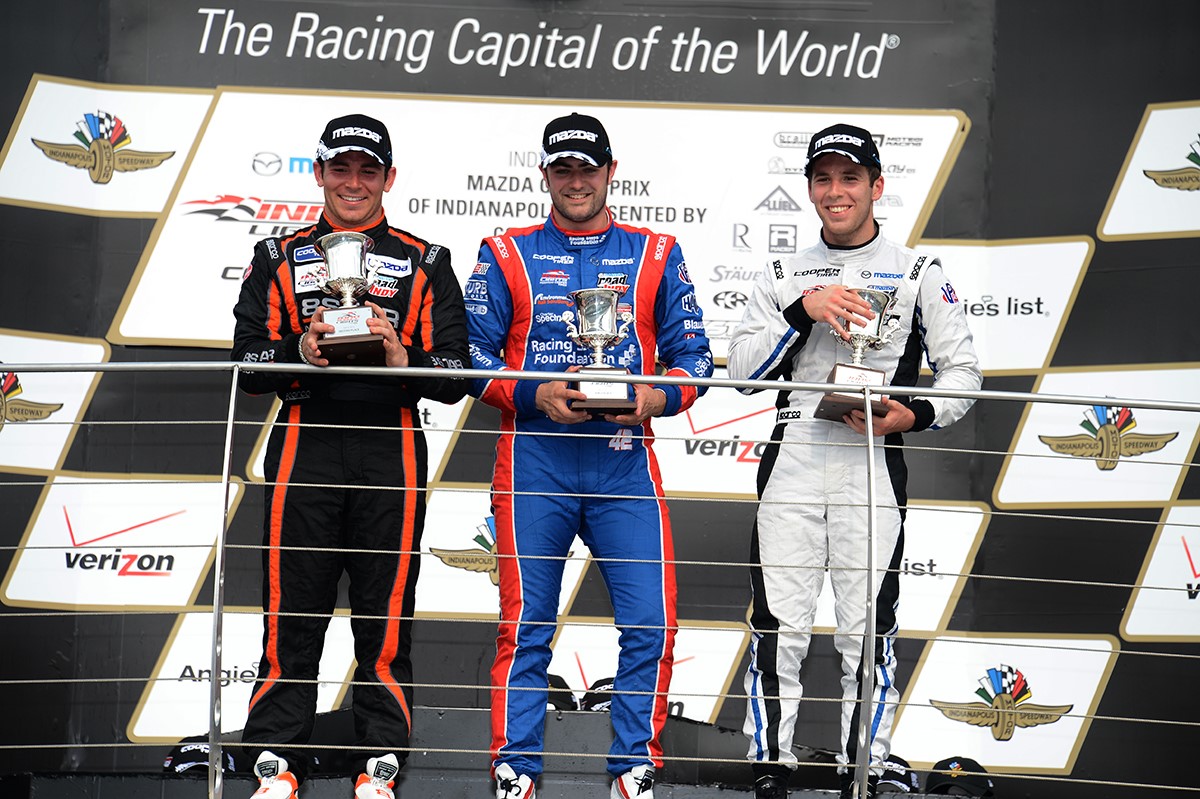 The championship battle in Indy Lights Presented by Cooper Tires intensified massively today as Englishman Jack Harvey won his first race of the season for seven-time championship-winning team Schmidt Peterson Motorsports with Curb-Agajanian in the Mazda Grand Prix of Indianapolis.

A distant seventh-place finish for Spencer Pigot (Juncos Racing) resulted in Jones regaining the series lead from Pigot by a one-point margin, 147-146, with Harvey only one additional point adrift in third. Schmidt Peterson, meanwhile, now holds a slender one-point lead over Carlin in the Team standings.

Harvey, from Lincoln, England, has finished among the top five in all but one of his 20 Indy Lights starts dating back to the beginning of the 2014 season. He also now has five wins to his credit. Last year he only lost out on the championship due to a tie-breaker of second place finishes.

The former British Formula 3 champion once again displayed the potency of the new Mazda turbo-powered Dallara IL-15 by qualifying on the pole this morning with a new Indy Lights track record of 1:15.0639, well inside the previous standard of 1:18.4256 set last year by Matthew Brabham.

The only time he was seriously challenged in the 30-lap race was under braking for Turn One on the opening lap, when teammate and fifth-place qualifier RC Enerson flew past on the outside line, only to slide wide onto the grass at the exit and drop all the way to 10th. Rayhall, who started third, took advantage of the ensuing confusion to slip past Jones into second, followed by teammate Chilton and Scott Anderson (Schmidt-Peterson). Behind them, Belardi Auto Racing teammates Felix Serralles and Juan Piedrahita effectively sandwiched Kyle Kaiser (Juncos Racing) at Turn Seven. Serralles, the only one to rejoin, later retired following a drive-through penalty and another spin.

Harvey gradually inched clear at the front, leaving Rayhall to fend off the Carlin pair. Chilton did try once to make a move on Jones for third into Turn One on Lap 18, only to be firmly rebuffed. The status quo remained.

Enerson drove well to recover to fifth, earning the RePlay XD Move of the Race Award. He was chased home by Anderson and Pigot, who was struggling with a lack of straight-line speed.

Following a 15-minute warmup at 10:00 a.m. tomorrow, the green flag for the Mazda Grand Prix of Indianapolis feature race, run over 35 laps or 60 minutes, will fly at 1:25 p.m., immediately prior to the Angie's List Grand Prix of Indianapolis Verizon IndyCar Series race. Live timing and commentary will be available on the new Mazda Road to Indy App and at indylights.com with live streaming at racecontrol.indycar.com.

Jack Harvey (#42 Racing Steps Foundation/Curb Records-Schmidt Peterson Motorsports with Curb-Agajanian: "It was pretty much a perfect day; we qualified on pole, won and set the fastest lap in the race. We've seen that qualifying has been key, that starting on the pole really pays dividends. But in the race, new tires were an advantage. It's such a toss-up, which one you prioritize, and we tried to be quite bold in the strategy this weekend. I started the race on old tires. It shows what a great team I have behind me. But it's so competitive; Sean Rayhall is on the podium in his third race, RC Enerson has continued to impress. If you don't move forward, people are overtaking you. It's down to us and the team to keep pushing each other forward. Ed will be on the pole tomorrow so it means trying to move as far forward as we can. But it was a great day, starting from pole and getting my first win of the year at the Indianapolis Motor Speedway."