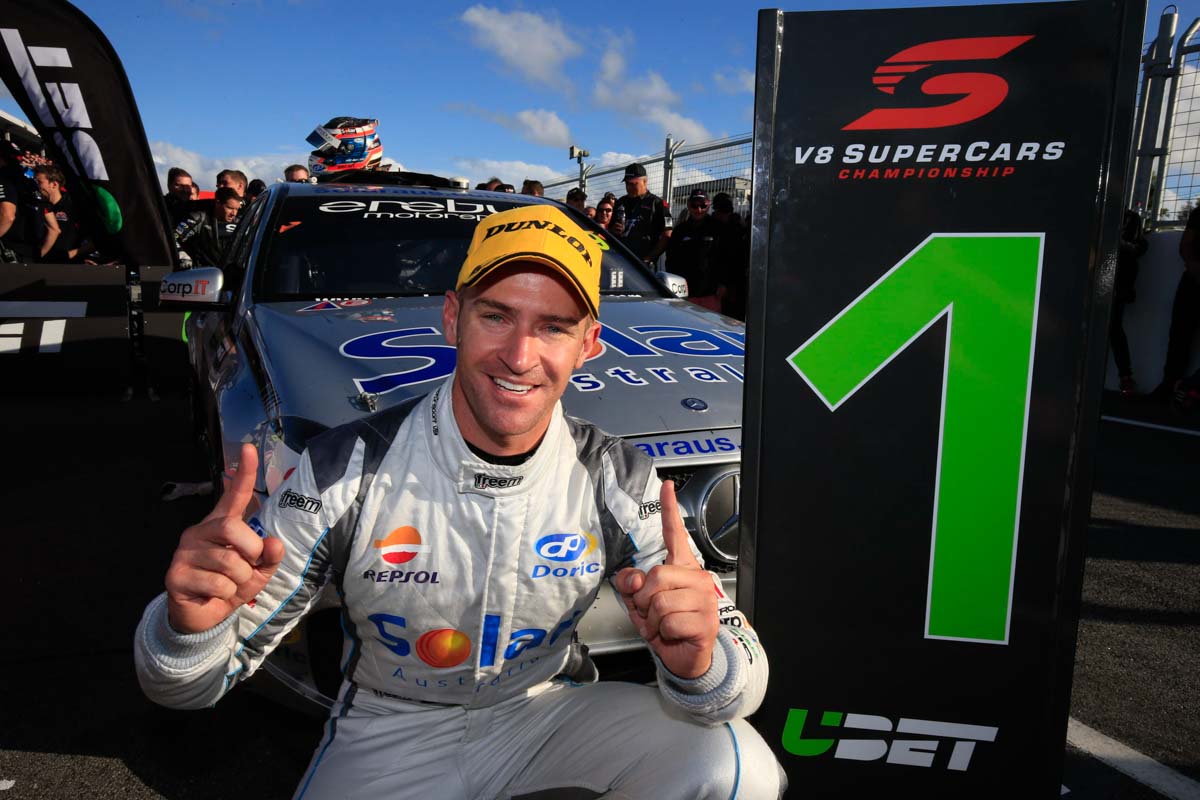 An emotional Will Davison has answered his critics in the best possible fashion today, taking victory in the 200km race this afternoon at the UBET Perth SuperSprint.

Following a promising, but ultimately disastrous run in Tasmania that culminated in his now infamous clash with James Courtney, the win today left the Erebus Motorsport V8 driver feeling vindicated.

The clash with Courtney showed just how much a podium result would mean to the team and today they were able to celebrate the best kind.

"I'm not a believer in Karma, but to be honest, I won't lie, you do start wondering when you're going to win again, so it feels pretty damn special," said Davison.

As a surprise victor, Davison rained on the parade of near-centurion Craig Lowndes as he passed the Red Bull Racing Australia driver with five laps remaining in the 84-lap fixture, scuttling any chance of a famous 100th victory for Lowndes.

"I'm one of CL's [Craig Lowndes] biggest fans and I've got a lot of respect for him sitting on 99 there," Davison said.

"But as much as that would have been a great headline, you don't feel sorry for someone on 99 race wins.

"We've been working pretty hard for this, we wanted to do it clean, it's very, very special for the team."

Davison described the race as a 'dream', labelling his run as perfect across the tough test of man and machine.

"It was one of those races where everything just came together," he said.

"It was about staying calm and to be honest, second was going to be an amazing result for us.

"I couldn't believe when I started seeing CL have some big slides with about five or six laps to go. That actually drew me to go even smoother, just to really give us that tire [life]. I just drove real smooth. They're the races you dream of," Davison said.

Davison and Lowndes started seventh and eighth on the grid, and after passing yesterday's dominant Pepsi Max Fords drove away from the field.

On lap 79 of 83 Davison made the dive at turn six and passed the Red Bull Commodore for the race lead.

Lowndes looked as if he was in the box seat as the soft versus hard tire battle played out – but the Erebus E63 crashed the party in Perth, delivering Davison his first win for the team and first win as a driver since Townsville 2013.

Lowndes was philosophical about how close he got to his 100th win, but is not stressed about being in the 'nervous nineties'.

"It would have been nice to get the 100th win today, particularly here in Perth where I broke the record two years ago," Lowndes said.

"Ultimately, it wasn't to be and we just didn't quite have the tire left at the end of the race to defend against Will. There wasn't much I could do about it."

Third place was also unpredictable, with Fabian Coulthard coming from the back of the grid after an off in the sand at turn six ruined his qualifying. He powered on through a cool suit failure and recovered the day in his Freightliner Commodore.

"To start the day 24th and finish 3rd was pretty cool," Coulthard said.

"The guys and the strategy was awesome. No-one gave up. That was the message that I got today. Everyone said don't stress, what's happened has happened so take it in your stride, and that is exactly what I did."

Shane van Gisbergen, who came into the race with an additional set of new tires thanks to a ballsy strategy call yesterday was 14th, with Saturday double-winner Winterbottom in 15th.

It was a forgettable day for Jamie Whincup, finishing 19th after spearing off track early.

Lowndes may not have gotten the win, but he has taken the Championship lead with 52 points over Courtney.