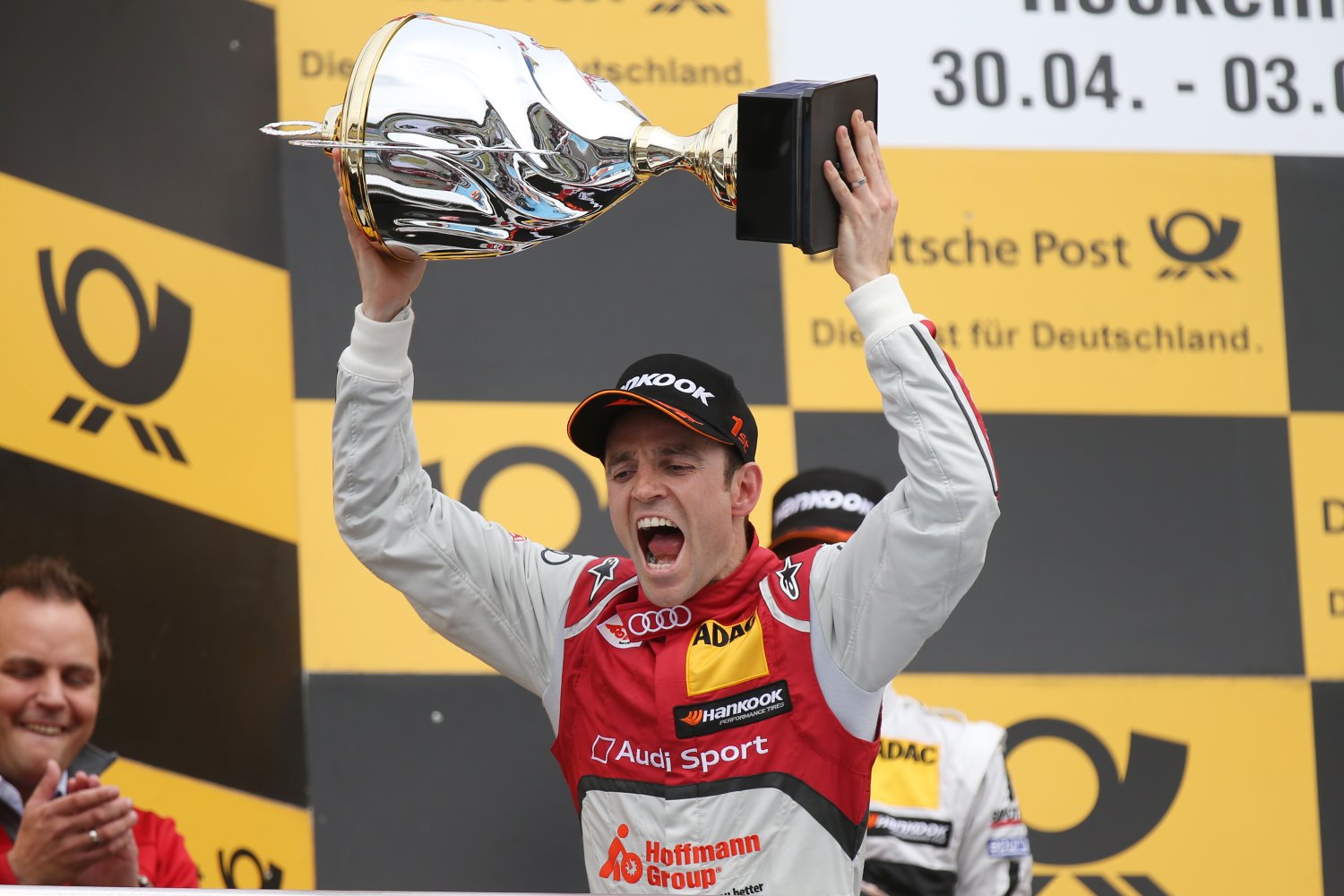 With strong nerves and really fast: Jamie Green (Audi) dominated proceedings in the first race at the NÃ¼rburgring and drove a lights-to-flag victory home in an impressive way. In an action-packed race, victory for the Audi driver was never in doubt. Mercedes-Benz driver Pascal Wehrlein, who started from second place on the grid, held on to this position following a thrilling battle with his fellow Mercedes-Benz driver Paul Di Resta, who finished third.

The first 40 minutes' race of the 2015 DTM season provided pure racing action. Eight drivers had to succumb to the hard driving antics on track and retired. From the opening lap onwards, there were fierce battles for every position. Only one driver was unfazed by it all: race winner Jamie Green. "I am not at all surprised that things were going so well today. My team is the same as last season," Green said. "Back then, I was quick, too, but I had a lot of bad luck. Today that wasn't the case." The pole sitter had a great start and already had a considerable gap from the rest of the field after the first corner. Two safety car interventions around the halfway point of the race didn't have any effect on the Brit either. Just after the restarts, the Brit had restored his original margin and went on to cross the finish line after 26 laps as the dominant winner.

"Everything is good. I love driving races. The new regulations are giving me the chance to do so."

While first place was undisputed, the battle for second place was a close and fierce one. At the start, Paul Di Resta charged from fifth place on the grid to third. On lap three, he also worked his way past Pascal Wehrlein, who started from second place. "That really was a great start. I was close to Pascal straight away and then I was able to overtake him. Unfortunately, my brakes degraded in the closing stages," said Di Resta, who eventually failed to defend his position from the attacks by the German. With three laps remaining, Wehrlein countered in the hairpin, overtook his fellow Mercedes-Benz driver and held on to this position until the checkered flag was out. "Towards the end of the race, my tires were still good. I knew that I was quick and I used this advantage," Wehrlein said. All in all, the two Mercedes-Benz drivers were more than happy with their results. Di Resta: "During the winter break, we have been working hard and optimized quit a lot, but you never know where you are exactly. It is a real relief to see what we are able to achieve again with our cars."

BMW will probably be anything but happy with the first race day at the Hockenheimring. In a closed team performance, the drivers for the brand from Munich locked out seventh to eleventh place. Maxime Martin was the best-placed BMW driver. The Belgian progressed from eleventh on the grid to finish seventh. Martin Tomczyk caused uproar and anger. The German spun his BMW M4 DTM in the hairpin and thus not only eliminated himself, but also Mercedes-Benz drivers Lucas Auer and Gary Paffett from the race. The latter made no secret of his frustrations after his retirement: "That was an absolutely unnecessary move by Martin."

Augusto Farfus had plenty of bad luck: after the Brazilian had claimed an excellent third place in qualifying, he eventually found himself at the back of the starting grid for the season opener. At the end of qualifying, the amount of fuel left in the tank of his car was less than the required minimum of 500 grams, which was the reason for his relegation. In the race, Farfus showed his competitive spirit and worked his way up through the ranks to finish tenth.

Audi driver Mattias Ekstrom, who had high hopes starting into the race, had to turn into the pits for an unplanned tire change following a collision with his fellow Audi driver Adrien Tambay and finished the race in twelfth place, unable to score any points. After a spin by AntÂ¢nio Félix da Costa on the opening lap, the race was over for Robert Wickens and Timo Scheider at an early stage already. Scheider complained about a painful wrist, went to see the doctor for a check and then gave the all-clear: "It hurts a lot, but it seems that nothing is broken. It should be okay for the race tomorrow."

All in all, the first race of the 2015 DTM season delivered what the fans and organizers had expected from the new regulations. Sunday will show whether Jamie Green's dominance will continue. From 13.43 hrs onwards, the drivers are again competing for points in the second race of the weekend.