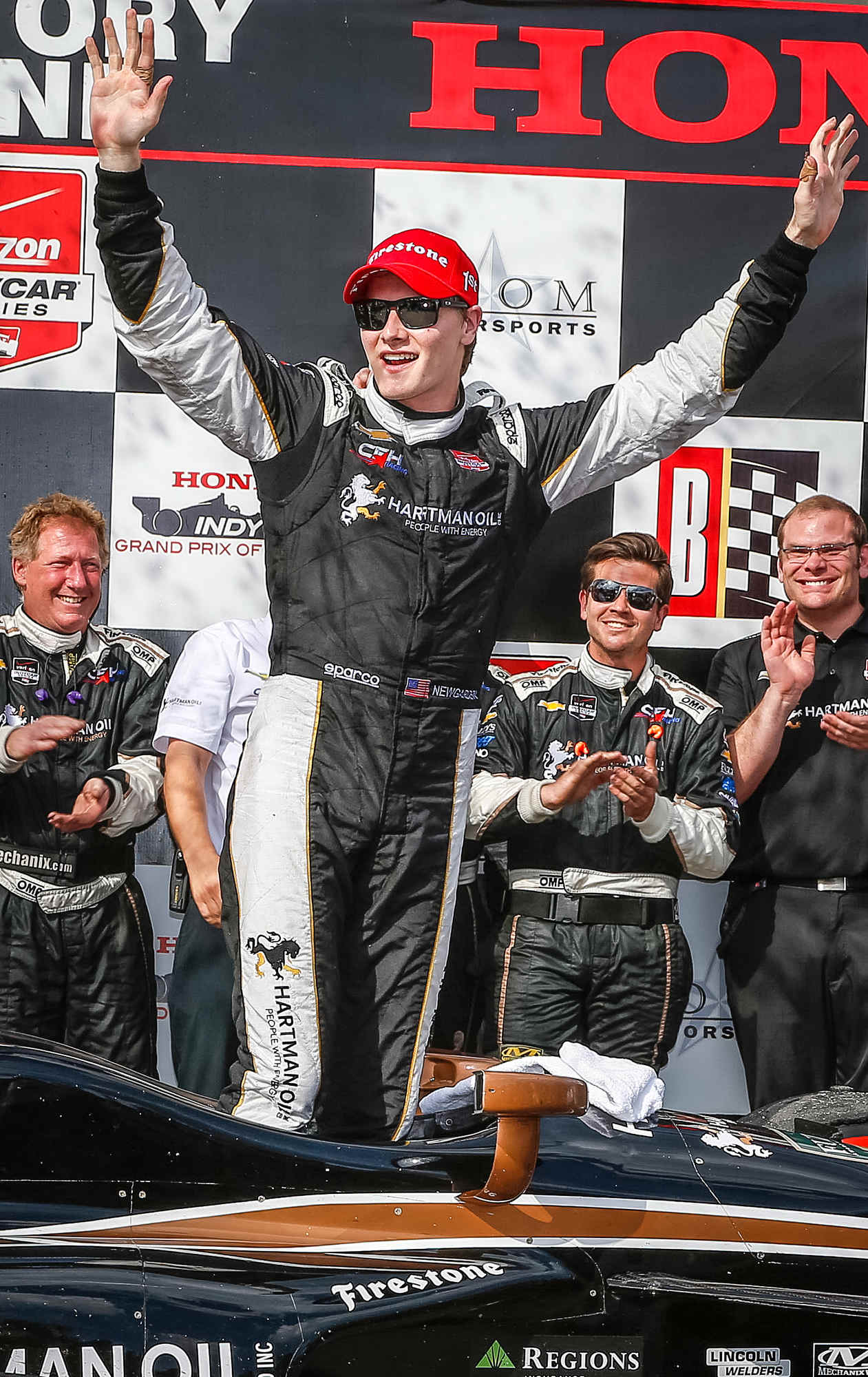 Birmingham, Ala. (26 April 2015) – The boom of the confetti guns surrounding Josef Newgarden in victory lane signaled the close of an incredibly successful day of racing for Rising Star Racing on Sunday at Barber Motorsports Park.

Neil Alberico opened the day with a big win in Pro Mazda presented by Cooper Tires competition to take his third victory of the season and grow his lead in the championship.

A few hours later, it was a similar sight as Spencer Pigot scored his second Indy Lights win of the weekend to grab the championship points lead after breaking through to take his first win in the category in Race 1 on Saturday.

And to close out the day, young Newgarden pushed his No. 67 CFH Racing Hartman Oil Dallara/Chevy to his first-ever Verizon IndyCar Series victory on to score the third Rising Star Racing victory of the day.

Rising Star Racing was formed in 2014 with dual goals: to help further the careers of talented and deserving young open-wheel drivers and create corporate sponsorship opportunities to support those drivers into the future. Sunday's results were an excellent demonstration of what can happen when talent meets opportunity.

"These guys (Josef Newgarden, Spencer Pigot, Neil Alberico) are so incredibly capable, and we've been fortunate to have them join us at Rising Star Racing," said Art Wilmes, who conceived and founded the Rising Star Racing program in 2014. "So to have a day like this where all three of them win, it is hard to describe how amazing this feels. I'm very proud to have drivers of this caliber as part of this program and of course we will keep pushing for more success for all three of them!"

Alberico began Race 2 from fourth on the grid but wasted no time making his charge to the front as he made an impressive move on the outside of Turn 1 to take over the second place spot. The move ultimately gave him the lead of the race when the leader was assessed a penalty and moved to the rear of the field.

In a race that saw three caution periods, Alberico never looked back as he focused on perfectly timed restarts and setting quick, clean laps around the Barber Motorsports Park road course. He eventually put over a three-second gap on the field en route to the victory.

"It was a huge relief, a lot it out there is out of your control but when you have the faith that the Rising Star Racing and Cape Motorsports guys have in you, it gives you a lot of confidence," said Alberico. "It is great to come back from a tough result at NOLA and come back to be on top and I can't thank God enough and everyone on the team and everyone that made it happen today."

After kicking the door open with his first Indy Lights victory on Saturday, Spencer Pigot put an emphatic stamp on the weekend as he returned to the winner circle once again for Juncos Racing on Sunday after a flag to flag run to the checkers. The win earned him the lead in the championship points with five rounds now in the books as he looks forward to continuing that kind of momentum next month in his three rounds of racing at the Indianapolis Motor Speedway.

"It was a tough race, I had a lapped car in front of me the whole race and that made it a bit difficult to keep the groove with the tires with him taking the air off my wings," said Pigot. "Overall, I'm just really happy with the result. What a weekend, we've been fast all weekend and the Juncos guys gave me a great car. We've always been good at this track and to come here and sweep the weekend in the first week of Indy Lights means a lot. I've got a lot of confidence now heading into Indianapolis and the whole month of May. I’m very happy with the result and thanks to the Mazda, Mockett, The Stutz, BAD, D-A, and Rising Star Racing, everyone that's helped me. I can't wait to get to Indianapolis!"

Newgarden started the race from fifth and was able to move to the front by the halfway point of the race. As a pair of different fuel strategies played out, Newgarden's final pit stop saw him make the most of his in and out laps to grow his advantage over Scott Dixon to over seven seconds. A late race charge from Graham Rahal, who was on another strategy, never factored in Newgarden's day as he was able to convert his advantage into his first-ever Verizon IndyCar Series victory.

"What a day for Rising Star Racing!" said Newgarden, who cheered on Alberico in victory lane before jumping into his car for the race day warm up. "This CFH Racing team, they gave me an incredible car and they deserve this. I was able to just get out there and go win this on merit. We were going up against the giants but I think this team has what it takes to be a giant in the future. We've got great partners, great team owners, and they really deserve this (win). Today was a good day, we need to have more of these."

Rising Star Racing will be back in action in two weeks when the Verizon IndyCar Series opens up the month of May with the Angie's List Grand Prix May 7-9. The weekend will feature double headers from both the Pro Mazda and Indy Lights championships.