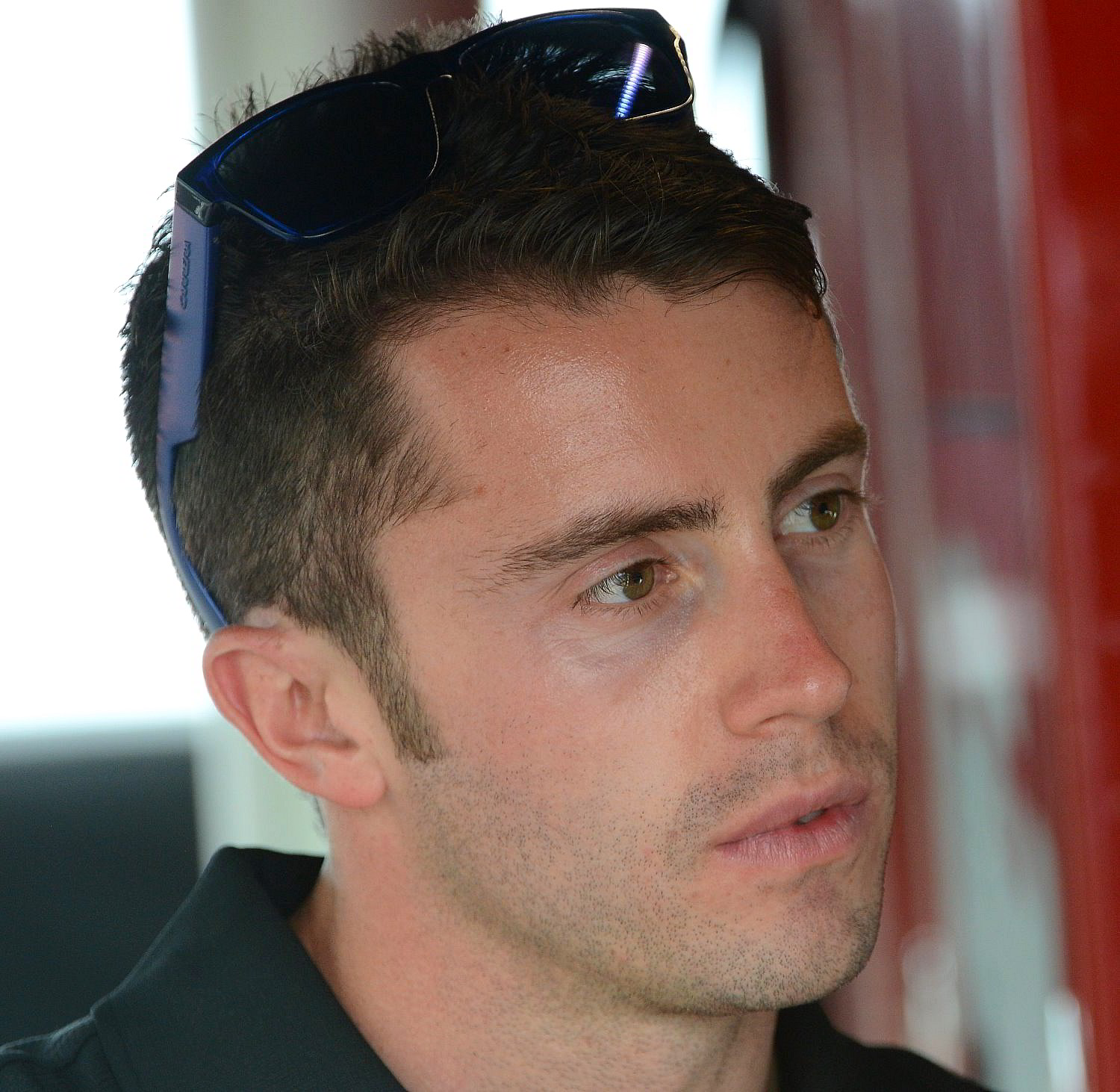 BIRMINGHAM, Ala. – Pole sitter JD Davison, of St. Petersburg, Fla., in the No. 33 Always Evolving / ReplayXD / Nissan Nismo Nissan GT-R GT3 scored a flag-to-flag victory in Round 6 of the Pirelli World Challenge GT class in the MOMO Grand Prix at Barber Motorsports Park presented by Porsche. Martin Fuentes of Mexico City, Mexico driving the No. 07 Scuderia Corsa Hublot / Samsung Ferrari 458 GT3 Italia took the win in GTA, while Colin Thompson, of Doylestown, Pa. piloting the No. 11 Kelly-Moss Motorsports Porsche of Bucks County / PenVal Porsche 911 GT3 Cup was a victor in the GT Cup presented by MOMO class. For Davison, it was his first career Pirelli World Challenge win and the first win for Nissan in the GT class.

The 50-minute race held under partly cloudy skies and 70 degree temperatures started with a double file, rolling start. Davison was able to take the lead over the field. He was closely followed from the start and throughout the race by Nicky Catsburg, of Voorthuizen, Netherlands, in the No. 25 Blancpain Racing Lamborghini Gallardo R_EX. The duo of Davison and Catsburg were also followed off the start and as the race continued by Mike Skeen, of Charlotte, N.C. driving the No. 2 CRP Racing DeVilbiss/Hawk Performance Audi R8 LMS Ultra.

After the clean get away by most of the field (Walt Bowlin, of Tarpon Springs, Fla. in the No. 23 M1 Racing Tampa Bay Jaw Surgery Centers Audi R8 LMS Ultra had contact on the start and had to retire), the pack settled into the race.

After five laps the GT order was Davison, Catsburg, Skeen, Michael Lewis, of Laguna Beach, Calif., in the No. 41 EFFORT Racing / Curb-Agajanian Porsche 911 GT3R, and GT points leader coming into the weekend, Olivier Beretta, of Monte Carlo, Monaco driving the No. 61 R. Ferri Motorsport Ferrari Ontario-Toronto-Alberta Ferrari 458 GT3 Italia. In GTA, Frank Montecalvo, of Highlands, N.J., in the No. 66 Bayshore Racing DragonSpeed Mercedes-Benz AMG SLS GT3 started from class pole and led over Henrique Cisneros, of Miami, Fla. in the No. 30 MOMO NGT Motorsport Ferrari 458 GT3 Italia. Montecalvo was 8th overall in the race with Cisneros 14th overall. Henrik Hedman, of Ft. Lauderdale, Fla, was third in class and 16th overall in the No. 10 DragonSpeed Mercedes-Benz AMG SLS GT3.

In GT Cup, Thompson started from pole and led the class through three laps with Alec Udell, of The Woodlands, TX, in the No. 17 Amsource Capital/Panther Pipeline GMG Porsche 911 GT3 Cup and Sloan Urry, of Salt Lake City, Utah, in the No. 02 Engel & Volkers TruSpeed Autosport Porsche 911 GT3 Cup in pursuit. By lap four Udell had passed Thompson for the lead with Urry remaining in 3rd.

The race was green until lap nine when Christina Nielsen, of Aarhus, Denmark, in the No. 7 TRG-AMR Orion / Royal Purple / PassTime USA Aston Martin Vantage GT3 contacted Hedman in turn 17. Both cars had to be pulled from the gravel and were able to re-fire and continue, but the caution took five laps. Nielsen was issued a stop and go for the contact with Hedman.

With the lap 15 restart, Davison once again kept the lead into turn one with Catsburg positioned closely behind. Beretta passed Lewis early on in lap 15 for fourth. In addition, Ryan Dalziel, of Windermere, Fla, in the No. 31 EFFORT Racing World PMO Porsche 911 GT3 took advantage of the restart and passed his teammate Lewis for fifth position. In GTA, Tim Pappas, of Boston, Mass., in the No. 54 Black Swan Racing Dodge Viper GT3R had a great restart and rocketed ahead over Fuentes and Cisneros, while Udell was able to maintain his lead over Thompson with now Lorenzo Trefethen, of Napa, Calif., in the No. 13 Trefethen Family Vineyards ANSA Motorsports Porsche 911 GT3 Cup into third after a great restart over Urry.

As the race proceeded the lead two of Davison and Catsburg were the only two cars able to maintain a pace in the 1:24 bracket throughout the event. Further back there were great drives throughout the GT class field. Johnny O'Connell, of Flowery Branch, Ga., driving the No. 3 Cadillac Racing Cadillac ATS-VR GT3 moved from 27th to fourth in a great drive up through the field. O'Connell had started from 27th after an engine change in his No. 3 Cadillac. Chris Dyson, of Pleasant Valley, N.Y., piloting the No. 16 Bentley / Breitling / Mobil 1 Bentley Continental GT3 also was able to find creative places to pass and moved from 11th up to sixth at the checkered flag. Robert Thorne, of Littleton, CO, in the No. 6 K-PAX McLaren 650S GT3 moved from 29th to 13th.

In GTA, Pappas continued to lead over Fuentes and Cisneros, who were 13th, 14th and 15th overall in GT.

On lap 18, Udell continued to lead Thompson in GT Cup, but the driver of the No. 11 Porsche 911 GT3 Cup made a deft pass through the outside of turn 16 and on the inside of turn 17 to take the lead, a lead he wouldn't relinquish. After a lap 24 restart, Fuentes was able to get around Pappas for the GTA lead and the eventual win in class.

After a final late race spin that brought out another caution, the pack was brought around for a green-white-checkered finish. Davison held off the last attempt by Catsburg and the top five in GT were Davison, Catsburg, Skeen, O'Connell, and Dalziel. In GTA, it was Fuentes, Cisneros, and Pappas. In GT Cup presented by MOMO, it was Thompson, Udell, and Urry.

"I was very fortunate to put it on pole for this race again. I thought I could gap it and roll away with it," said Thompson. "Then of course cautions came out, working through traffic. I was trying to find the places where I was stronger than him (Udell) to time my pass. That last complex, I got a good run to him, he made it difficult to pass so I had to be creative. Outside of 16 rolling to inside of 17 was the best way to get it done."

"It feels great. It feels amazing," said Fuentes. "Being in this category, not knowing the track, the car was great. It was a complicated race. I started way back there. I was able to get first place previous to the last lap. I got around Pappas on a restart and I just decided to save the tires to the end. I knew everyone was going to go crazy. It's a very narrow track. Thanks for everyone coming out to the race and we look to put on another good race tomorrow."

"Obviously I qualified on pole and won the race so it was a pretty good day," said Davison. "It doesn't get much better. I'm just really pleased for the whole team. When you get a big opportunity like this with a manufacturer as a driver, when you're expected to perform, you have to perform. Win and a pole six races into the year, it adds some confidence."

Of note, Dalziel was awarded two of the special race awards including the Optima Batteries Best Standing Start for advancing three positions when the lights went out. Dalziel was also awarded the Cadillac ATS-V Move of the Race for his pass on lap 20 of Beretta. The MOMO Turning point GT Cup race was Thompson's pass of Udell for the lead. Fuentes won the VP Racing Fuels Hard Charger Award gaining nine positions during the race. Andy Pilgrim, of Boca Raton, Fla., in the No. 8 Cadillac Racing Cadillac ATS-V R GT3 was awarded the Invisible Glass Clean Pass of the Race Award for his pass on lap 3 of Peter Cunningham, of Milwaukee, Wis. in the No. 42 RealTime/Acura Motorsports/HPD Acura TLX-GT.

Round 7 is scheduled for 10:55 a.m. Central time on Sunday. Watch the pre-race show starting at 10:35 a.m. and then the race live at http://www.world-challengetv.com or www.torque.tv.