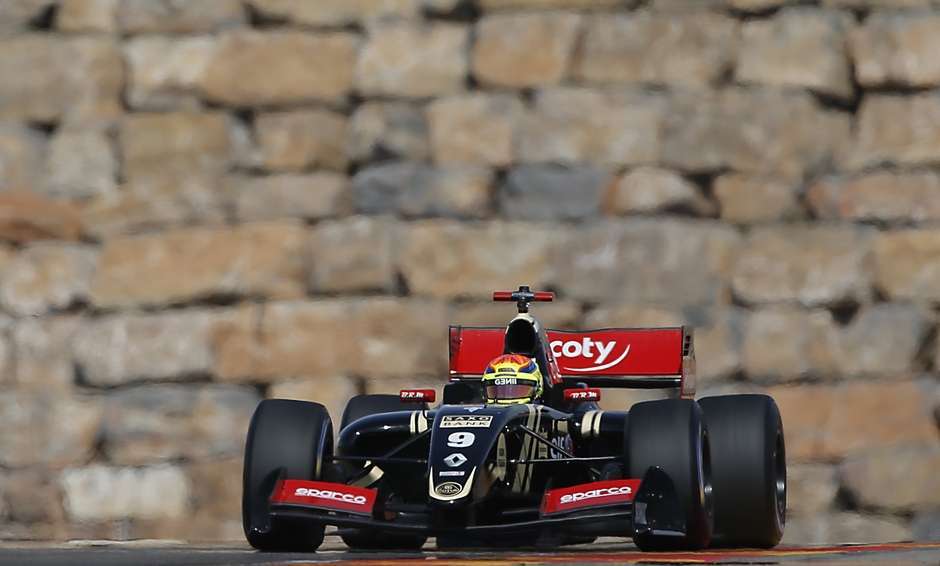 Following a studious winter composed of four days of collective tests, the Formula Renault 3.5 Series returned to competition at Motorland AragÂ¢n. This Friday, Matthieu Vaxiviere (Lotus) posted the best time of the day in 1:42.013. The Lotus F1 Team Junior driver led from Gustav Malja (Strakka Racing) and Beitske Visser (AVF). In the afternoon, the Frenchman was again the quickest ahead of Jazeman Jaafar (Fortec Motorsports) and Tio Ellinas (Strakka Racing) during the session where running with the low downforce configuration on the rear wing was mandatory as it will be for both Saturday qualifying and the race.

Indonesian drivers Sean Gelael (Jagonya Ayam with Carlin) and Philopaz Armand (Pons Racing) were the first to post a time with Beitske Visser. Gustav Malja and the Fortec Motorsports drivers Jazeman Jaafar and Oliver Rowland each led the way before a stoppage caused by Alfonso Celis (AVF).

When the action resumed, Matthieu Vaxiviere moved to the top, but Gustav Malja answered back. After a red flag provoked by Roberto Merhi (Pons Racing), the Swedish driver improved, beginning the final sprint with Matthieu Vaxiviere getting the upper hand with lap time of 1:42.013, ahead of Gustav Malja, the top rookie in the session. Beitske Visser, Pietro Fantin (International Draco Racing) and 2014 Eurocup Formula Renault 2.0 winner, Nyck de Vries (DAMS), followed

In the afternoon, Tom Dillmann (Jagonya Ayam with Carlin), Philopaz Armand, Pietro Fantin, Nicholas Latifi (Arden Motorsport) and Sean Geleal all took turns at the top of the time sheet. Nyck de Vries then took over before replicating Matthieu Vaxiviere, who led briefly.

Following two short successive stoppages, the McLaren Young Driver Development Programme driver was bumped off the top spot by Oliver Rowland and Jazeman Jaafar from Fortec Motorsports, but Matthieu Vaxiviere improved to 1:42.337 to lead the Malaysian driver by 4/10ths of a second. Tio Ellinas, Oliver Rowland and top rookie in the session, Dean Stoneman (DAMS) completed the top five.

Matthieu Vaxiviere: “I wasn’t happy with a few errors that cost me a lot this morning. Everything was better in the afternoon and it is positive although it is only practice. We’ll see tomorrow in qualifying, but the objective is to get the pole position and the win, like two years ago in the Eurocup Formula Renault 2.0."

Gustav Malja: “It was a good day. We had a very positive morning with a lot of information for Sunday. The second session was more difficult and messy. I couldn’t feel my full potential in low downforce, but we will work tonight in order to be as ready as we can for qualifying."

Jazeman Jaafar: “It was a very interesting day with the free aerodynamic configuration in the morning and the mandatory low downforce in the afternoon. It is challenging. Everyone is trying to find the best set-up, and you have to get on top of it before the others. The grip was really low, but we managed to do well in both sessions."