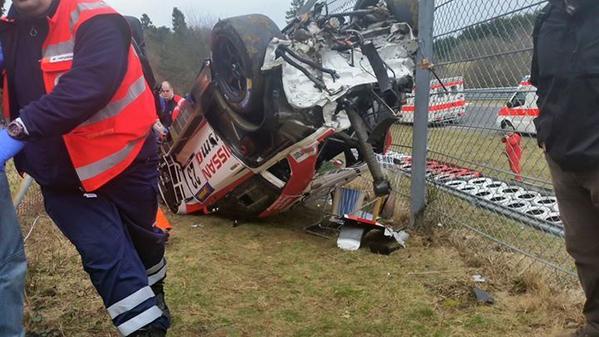 The vehicle has been impounded by the German authorities and Nissan has offered full cooperation in their investigation.

Everyone at Nissan would like to again extend their deepest sympathies to the family of the deceased and to the spectators who were hurt. Nissan would also like to thank everyone for the support they have shown for the fans involved, the team and for Jann Mardenborough.

03/28/15 WARNING: The video below doesn’t show the moment the car hits the spectators, but be warned, some people may find it disturbing.

"In the opening round of the VLN Endurance Championship at the NÃ¼rburgring, an accident happened on Saturday in which several spectators were injured. One of them died despite immediately initiated rescue operations in the Medical Center of the circuit. The other injured spectators were taken for further medical care to the hospital. The race was stopped to allow quick access to the scene of the rescue services and not restarted.

"At Flugplatz, a racing vehicle drove off for a yet unknown reason from the track and came to a halt behind the safety features of the circuit. The VLN and the organizer of the race are deeply saddened, and our thoughts are with the families and friends of the victims."

"During today's 'VLN 1' race at the NÃ¼rburgring Nordschleife, a serious incident occurred involving the No.23 Nissan. The car is reported to have left the track at the 'Flugplatz' section and vaulted the catch fencing, landing on its roof in a spectator area. Several spectators were injured in the incident and despite immediate efforts one of them succumbed to their injuries. The others have been taken immediately to hospital for care.

"The driver, Jann Mardenborough got out of the car and, after initial checks in the circuit Medical Centre, has been taken to hospital for further routine checks.

"Today's events have been a tragedy. We are all deeply shocked and saddened by these events and our immediate thoughts go to the deceased, those injured and their families and friends. The team is fully co-operating with the race organizers to conduct an immediate and thorough investigation into this incident."

03/28/15 Race organizers at the Nurburgring have confirmed that a spectator was killed during the opening race of the VLN season earlier today. According to reports, the Nissan-GTR of British driver Jann Mardenborough lost control at the Flugplatz corner, went over a barrier and into a spectator area. One spectator died on the scene, while others are being treated for injuries.

We do not have the name of the deceased spectator yet. However, we will pass along more details as we receive them.