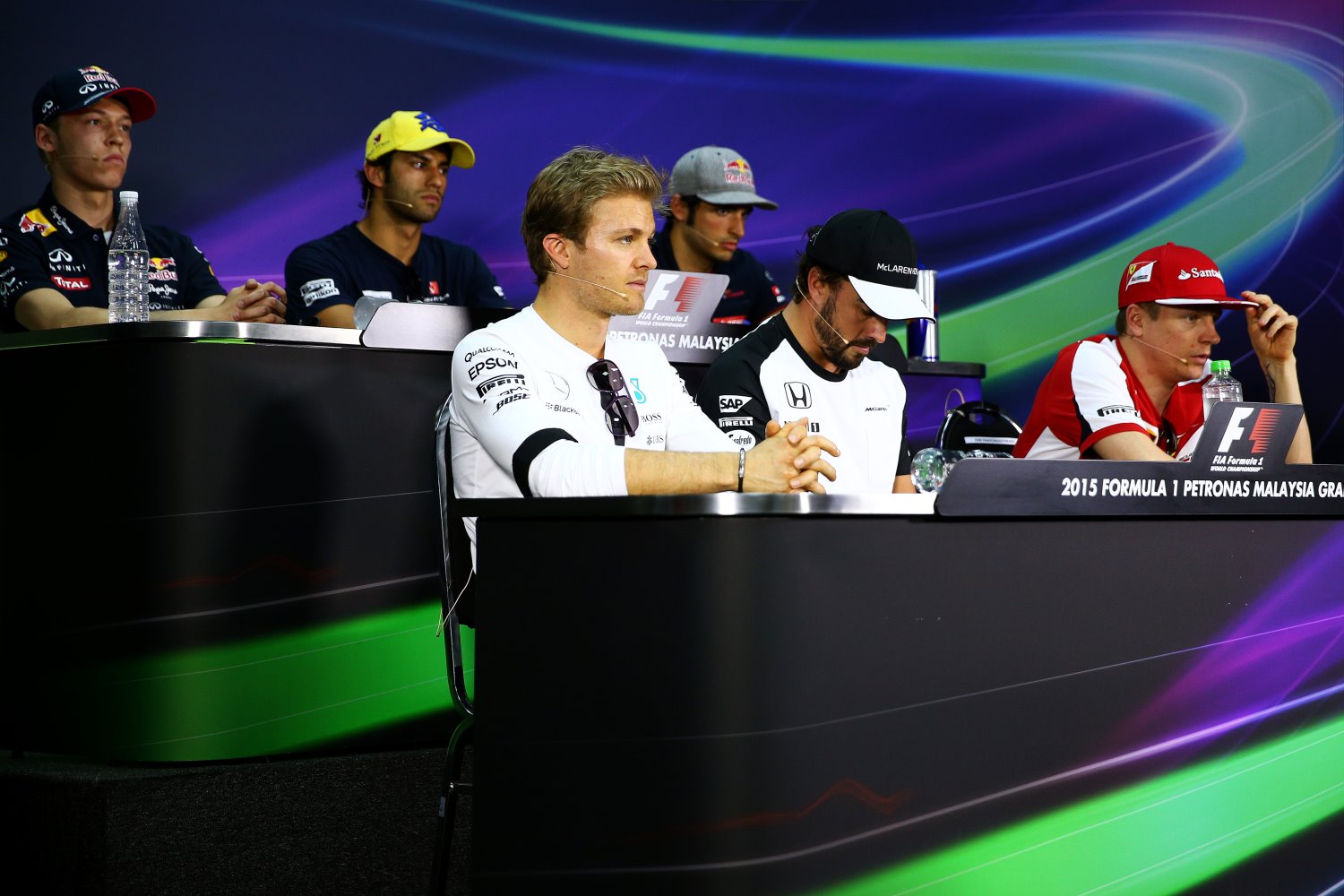 Fernando Alonso, on his return to F1, has immediately gone off-message regarding McLaren’s position on the cause of his testing accident at Barcelona in February that left him hospitalized with concussion. Upon being asked about the accident in the Thursday press conference at the Malaysian Grand Prix, Alonso stated: "Definitely we had a steering problem in the middle of turn three. It locked into the right and I approached the wall."

McLaren has declined publically to respond to its driver's position – but privately team insiders are dismayed with what he said in the conference, having understood from him beforehand that he would be supporting its position that nothing in the data suggests a mechanical problem.

What the telemetry does show is that in the three second gap between him leaving the track and hitting the wall he was braking hard and downshifting but not steering. Having applied right-hand lock for the initial turn, that lock remained on the car until it hit the wall. While this might be interpreted as fitting with Alonso’s claim, the team can find no evidence that there was a problem with the steering – though an extra sensor has been fitted to the steering for Malaysia and the special quicker ratio rack that Alonso prefers and was using in the test has been replaced with a standard one, as used by Jenson Button and Kevin Magnussen.

Speculation has raged that Alonso suffered some sort of medical problem when in the car and that the reason for his loss of control was that he fell unconscious at the wheel. Alonso refutes this absolutely and doctors have found no evidence of it. “I remember the accident and I remember everything the following day," he said in Malaysia. “It locked into the right and I approached the wall. I braked at the last moment, I downshifted from fifth to third… if you have any problem or any medical issue, normally you will lose the power and you will go straight to the outside, never to the inside. In a Formula 1 car you still need to apply some effort on the steering wheel…"

Alonso also rubbished suggestions initially made by McLaren that the gusty winds of the day had contributed to the accident, saying that he was driving relatively slowly as he lost control. “No, no, definitely not. I don’t know if you’ve seen the video, but even a hurricane will not move the car at that speed."

He remains insistent that he did not lose consciousness in the accident itself, although this apparently contradicts impressions of eye witnesses. “I remember everything," he reiterated. “Sunday morning, all the setup changes, the lap times… I think Vettel was in front of me before turn three but cut the chicane to let me go, exiting the pitlane. After the hit I was kissing the wall for a while and then I switched off the radio first, because it was on, and then I switched off the master switch for the batteries to turn off the ERS system, just because I saw the marshals coming and, if not, they cannot touch the car. So, yeah, I was perfectly conscious at the time. I lost consciousness in the ambulance or in the clinic at the circuit but the doctors said this is normal because of the medication that they put you on, just for the helicopter transportation and the checks that they do in the hospital: the MRI and the evaluation needs this protocol, needs this medication, so this is normal that maybe you don’t remember."

This points to a possible over-loading of the power steering pump having created a momentary heavy-spot. A faster steering rack would increase the pressure of the fluid passing through the pump and it can be possible that a sequence of right-left-right such as that through Barcelona’s turns two and three could induce this problem. David Coulthard suffered such an accident during testing with Williams at Silverstone in 1995, shortly after the left-right sequence of Vale onto Club. However, this does not explain why Alonso’s problem was manifest when travelling relatively slowly while having suffered no such problems on previous laps when going much faster.

“I think it’s clear that there was a problem in the car," continued Alonso, “but it hasn’t been found on the data at the moment. It’s one of the things that I did also in the factory last week, not only the simulator, but – with all the engineers and all the data available – going through the moment. There are some spots here and there but there is not a clear answer. So I understand completely and will support the team until they find a clear answer that it was this or that. It’s impossible to say or to lie [our italics] that it was this or that. They need to go much further. If they will find something, I don’t know, because if after one month we didn’t find anything on the data, it is maybe because whatever part was the problem was not available on the data, so maybe it will never be."

When a questioner then suggested the team had said there was no problem, Alonso responded with: “Well, I don’t think that they say this anymore." That was not a position McLaren would confirm after the conference.

It is quite possible we will never know definitively the cause of this accident. What is of perhaps more immediate significance is the apparently adversarial position Alonso has adopted to McLaren’s official take on his accident. Those speculating pre-season how long it might take for Alonso and Ron Dennis to fall out second time around feel they may already have their answer. Motor Sport Magazine