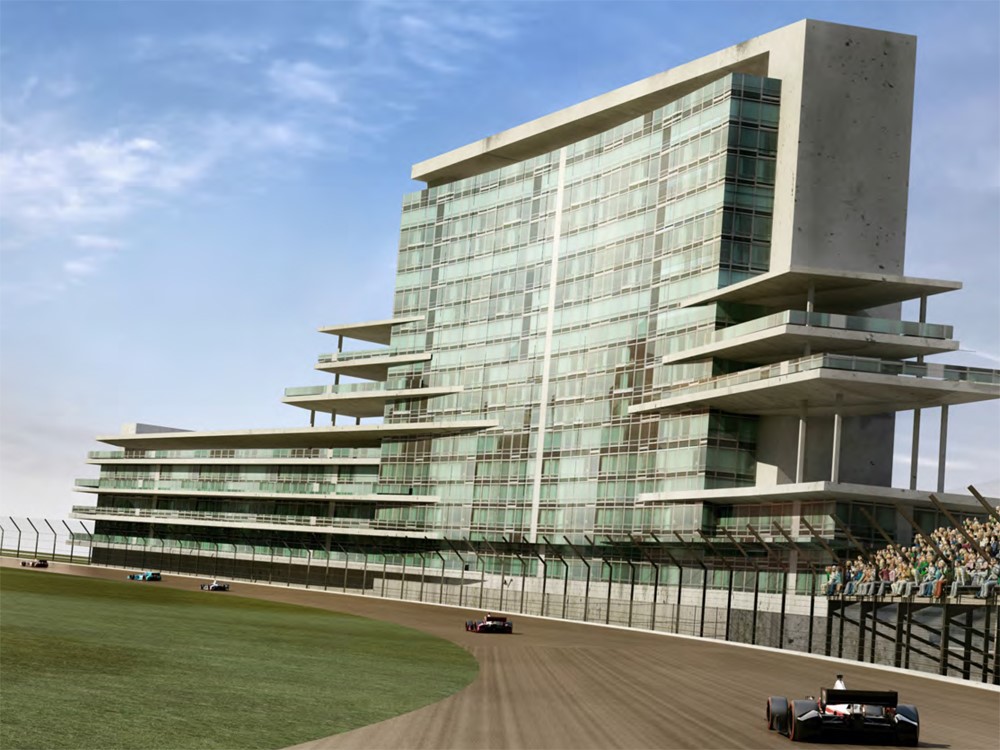 The Indianapolis Motor Speedway wants to build a 125-room hotel with apartments and a restaurant along Turn 2 of the track.

Local developer Browning Investments Inc., on behalf of the IMS, put out requests for proposals, which were due March 20. (The image below is just a mockup for the RFP; the eventual project likely would look different.)

How much interest the RFP generated from developers, or what timing might be for construction, is unclear. IMS President Doug Boles declined to discuss specifics.

“We’re in exploratory mode," he told Property Lines. “We’ll sort that out in the next coming weeks, or months."

But judging from the RFP, it seems IMS is operating on a pretty aggressive timetable.

“The IMS would like construction to commence as soon as feasible," the RFP states.

IMS wants to have new or renovated Turn 2 VIP suites completed in time for the 100th running of the Indianapolis 500 next year, with completion of the hotel to follow by May 2017, according to the RFP.

The hotel also could include an unspecified number of apartments and leverage other entertainment opportunities at the track such as a golf-pro shop and clubhouse to complement the Brickyard Crossing golf course, the RFP said. It must offer at least 10,000 square feet of meeting space.

“We left the RFP broad enough so that if people wanted to focus on more than [a hotel], we’re open to having those conversations," Boles said.

Whether there would be demand for such a hotel is without question, Visit Indy Vice President Chris Gehl said.

“We feel that if they ultimately decide to put a hotel back on their property, there would be demand because the Indianapolis Motor Speedway is a magnet for tourists year round," Gehl said.

The town of Speedway is open to using tax-increment financing funds translating to about $5.5 million in assistance to help support the project, according to the RFP.

A new hotel would bring overnight lodging back to the track. IMS in 2009 tore down the aging Indianapolis Speedway Hotel that was located along Turn 2.

Plans for a new hotel coincide with a bounty of track improvements slated for completion by May 2016. The Indiana General Assembly two years ago approved providing IMS state loans to help it make $100 million in upgrades.

Browning Day Mullins Deirdre Architects has served as the architect for the conceptual drawings provided in the RFP and continues to serve as architect for the master plan. Interested developers are encouraged to put together their own qualified team. IBJ.com