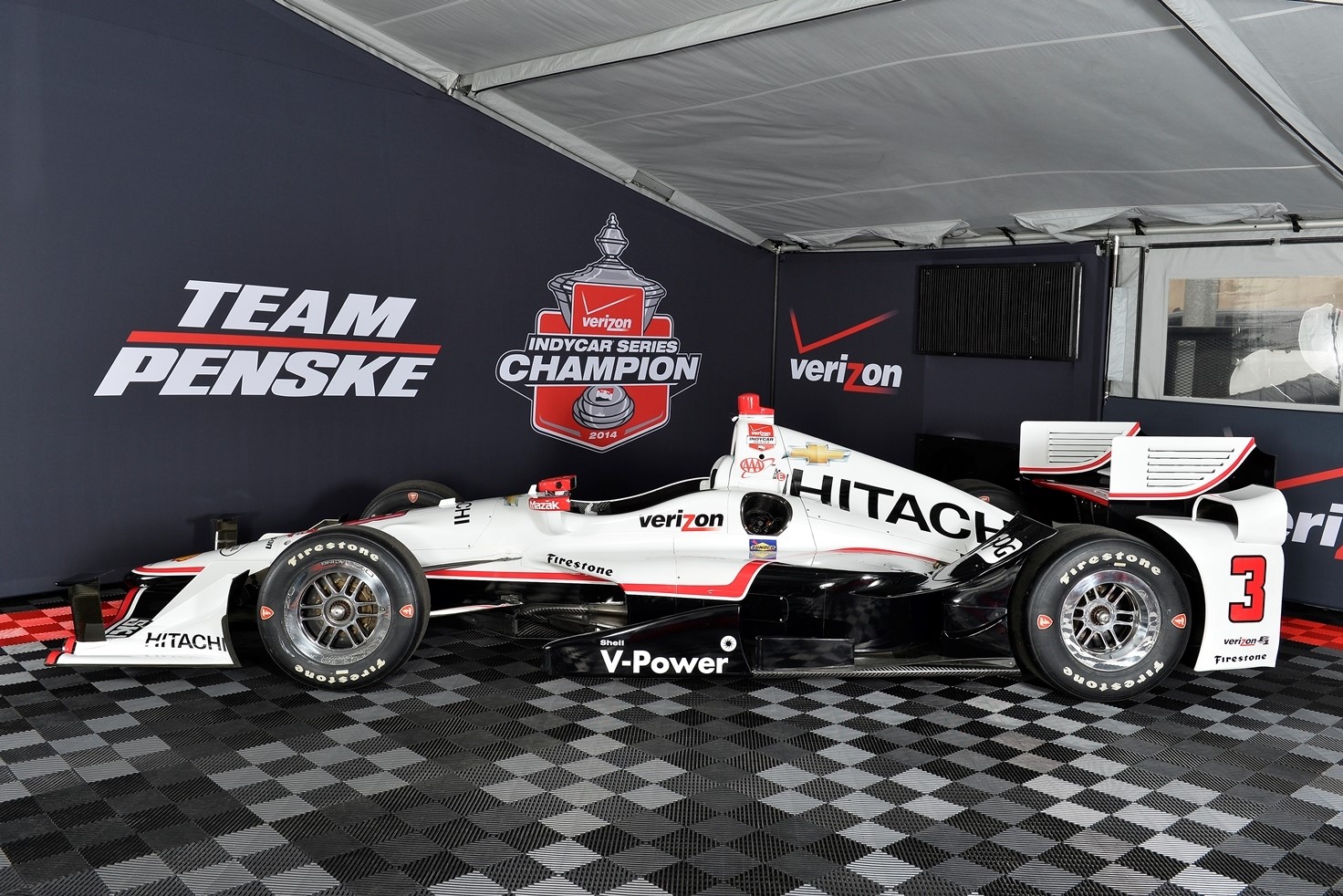 Building on one of the most successful INDYCAR partnerships in recent memory, Team Penske and Hitachi Group announced today that Hitachi will return as a sponsor for all of the team's cars competing in the Verizon IndyCar Series.

The No. 3 Team Penske Dallara/Chevrolet will be driven by three-time Indianapolis 500 winner Helio Castroneves. The Hitachi logo will once again adorn Castroneves' IndyCar this season, and in the future under the terms of the multi-year partnership extension.

Beginning this weekend at the Firestone Grand Prix of St. Petersburg (Fla.), Castroneves will race the distinctive black and white No. 3 Hitachi Chevy at eight events during the 2015 Verizon IndyCar Series. The remaining Hitachi primary-sponsored races for the series include: the Indy Grand Prix of Louisiana in Avondale, La.; the Angie's List Grand Prix of Indianapolis in Indianapolis, Ind.; the Chevrolet Dual in Detroit presented by Quicken Loans in Detroit, Mich.; the ABC Supply Wisconsin 250 in West Allis, Wisc.; the Iowa Corn Indy 300 in Newton, Iowa; the Honda Indy 200 at Mid-Ohio in Lexington, Ohio; and the GoPro Grand Prix of Sonoma in Sonoma, Calif. Hitachi will also continue to serve as an associate sponsor on the rest of the Team Penske full-season entries in 2015, including the No. 1 Dallara/Chevrolet driven by defending series champion Will Power, the No. 2 Chevy with former series champ and Indy 500 winner Juan Pablo Montoya as well as the No. 22 Chevrolet driven by Simon Pagenaud in his first season competing for Team Penske.

"Hitachi's automotive business is very proud to be a consistent supporter of IndyCar Racing, which continues to grow in popularity in North America," said Rob Sharpe, Vice President – Sales Division, Hitachi Automotive Systems Ltd. "Our Penske partnership is a clear demonstration of 'teamwork and technology,' where Hitachi can leverage its racing applications and automotive expertise in one of the world's most competitive racing environments."

"The sponsorship gives a strong boost to our recruitment efforts as well, particularly from the engineering association and excitement involved with motorsports, as well as from the strong association with Helio Castroneves, who is a great representative of Hitachi," said Sharpe.

"Our partnership with Hitachi has grown and developed over the last four seasons and we are proud of the success we have had together in the Verizon IndyCar Series," said Roger Penske. "Hitachi has established itself as an important partner in the series, not only with Helio and our team, but also working with Chevrolet on their engine fuel injection systems. We are excited to build on that winning formula in 2015 and beyond as we continue Team Penske's integrated global partnership with Hitachi."

After first competing with Team Penske in the 2012 INDYCAR season, Hitachi became a primary sponsor on the No. 3 Chevy driven by Castroneves at select races in 2013 when the popular Brazilian driver finished second in the championship. Last season, Hitachi was the primary sponsor for Castroneves for approximately half of the INDYCAR races, as the No. 3 team once again finished as series runner-up behind Power, who claimed his first title. Adding to the winning combination on the track, Castroneves and Hitachi have worked together to build the "One Hitachi" brand around Hitachi's social innovation business as a key part of the company's integrated marketing efforts.

"Hitachi has been an awesome partner for Team Penske and we are all very excited to welcome them back to the No. 3 Chevy team this season," said Castroneves. "I have had a great time racing and winning for Hitachi and getting a chance to represent them off the track as well. With Hitachi's continued support, hopefully we can bring home the championship for Team Penske this season."

"The 2015 sponsorship with Team Penske continues to provide the Hitachi Group with a tremendous opportunity to leverage the branding and social media value of a great IndyCar racing team," said Yoshiyuki Ohno, Senior Vice President, Hitachi America, Ltd., a wholly-owned subsidiary of Hitachi, Ltd. "Since 2012, Hitachi has been able to leverage its technology and applications experience, along with data analytics expertise, to help Penske build this successful racing team, while also developing new components for production vehicles that are on the road today."

"Partnering with such prominent names as Team Penske and Helio Castroneves also puts Hitachi in a strong position to continue to build our global brand strategy around Hitachi's Social Innovation Business," he continued.