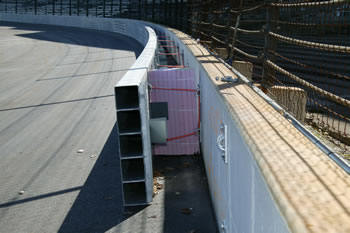 Indianapolis Motor Speedway officials plan to install 1,560 additional feet of SAFER barriers at the 2.5-mile facility before on-track activities commence in May for the Indianapolis 500.

IMS, which was the first to install the Steel and Foam Energy Reduction system in 2002, will add protection, track president Doug Boles said, around sections of a curved wall that serves as an emergency vehicle entrance point on the backstretch and in the short chute, to the drivers' left, between Turns 3 and 4.

"We are obviously different than the other mile-and-a half or two-mile ovals with the (low) banking and our angles," Boles told USA TODAY Sports. "We're so tight to begin with, the likelihood of getting into those (unprotected areas) is really slim and getting into one with any significant speed is even slimmer. But we decided that the best thing to do was to add (SAFER) to those two locations."

Townsend Bell's race car slid to a stop in the vicinity of the future backstretch modification after slamming the wall outside of Turn 2 in the final laps of the Indianapolis 500 last year.

"On drivers' left, the exit of Turn 2 is probably more likely for an IndyCar incident," Boles said. "That's one where you're likely to see it in an IndyCar situation than a NASCAR situation." The first major race at IMS is the May 9 Grand Prix of Indianapolis, which utilizes the facility's road course. The 2015 Indy 500 is two weeks later on May 24. NASCAR stages its Brickyard 400 race at the track on July 26.

The upgrades, Boles said, had been planned before but expedited in the wake of Kyle Busch sustaining a compound fracture of the right leg and breaking left foot while slamming into an uncushioned concrete wall at Daytona International Speedway in the NASCAR Xfinity Series season opener in February. NASCAR and International Speedway Corp., which owns DIS, were contrite after the incident, with track president Joie Chitwood III vowing to ring the rest of the uncovered walls at the 2.5-mile track in SAFER barriers.

Numerous other tracks responded with stop gap applications of tire barriers and pledges to reassess their safety preparedness.

Construction is underway on the additions at IMS, Boles said. The facility currently utilizes around 9,000 feet of SAFER barriers, he said.

''The Kyle Busch accident just caused us to take a look at it in February instead of looking at it in the fall," Boles said. "We actually went out and looked at it in the snow and looked through the facility and decided to go through with it shortly after the accident." USA Today