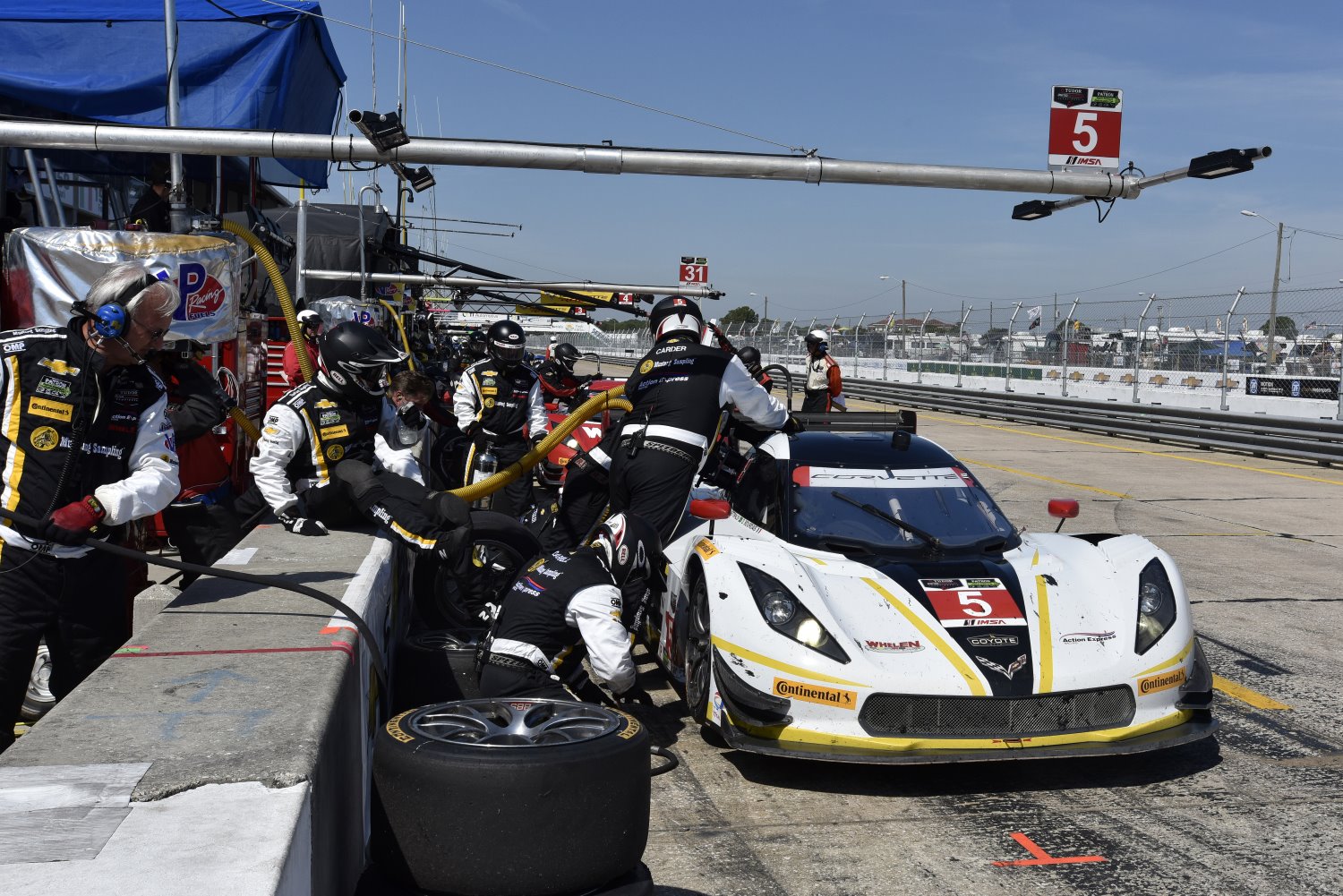 The 12 Hours of Sebring has hit the 10-hour mark. The sun has set on Sebring, and the atmosphere has become electric! The sights are unnatural and beautiful, the smell of fuel and brakes. Yet, as you look around, there are signs that the end of the race draws near. Some teams are fighting harder than ever to chase the win, for others, the fight is over.

The No. 5 Action Express Corvette has now lapped the field with former IndyCar driver Christian Fittipaldi at the wheel ahead of Joey Hand in the Ganassi Ford and just 1-second behind him the Richard Westbrook Corvette DP.

Prototype Challenge continues to be led by the No. 52 PR1/Mathiasen Motorsports Oreca FLM09 of Tom Kimber-Smith.

Patrick Pilet in the No. 911 Porsche 911 RSR has a 5-second lead over his teammate Frederic Makowiecki in car No. 912 in GTLM.

Jeroen Bleekemolen leads GTD in the No. 33 Dodge Viper.

I was just trying to hold and maintain ground. Everybody on the Ford EcoBoost team is trying to do their very best, but we just don’t have the outright speed right now. Overall, I think if we can keep it together we can fight for a podium here. It will be tough. I was trying to do what I did at Daytona in the (Rolex) 24 and not try to get outright lap speed, but rather get good pace laps in. So that stint it seemed to work for us and we’ll see what happens in the last four and a half hours here in Sebring.

It's a tremendous accomplishment for our team. We couldn't think of a better place to achieve this milestone than historic Sebring Raceway. Before this was one of the greatest racetracks in America, it served our country training the airborne heroes of World War II. Now that we've accomplished the mileage milestone, we've got another milestone we would like to accomplish at 10:40 p.m. tonight with one of our two entries.

We're in the lead, but that doesn't mean anything at Sebring. The car is running good, and we're keeping a close eye on CORE autosport at the moment. This weekend we're looking to bag as many points as we can. We had a good result at Daytona, and we automatically started thinking about the championship. The Patron Endurance Cup is a great thing to do, and it’s all about consistency. You saw at Daytona, we won the race but didn’t win the Patron Endurance Cup. So to win that particular championship, you’ve got to be consistent

We had problems with our windscreen early in the race that dropped us back to last in class. Now we’re up to third. We’re pushing as hard as we can, and we’ll see where we end up.

The No. 22 Alex Job WeatherTech Porsche makes its next-to-last pitstop with Leh Keen at the wheel