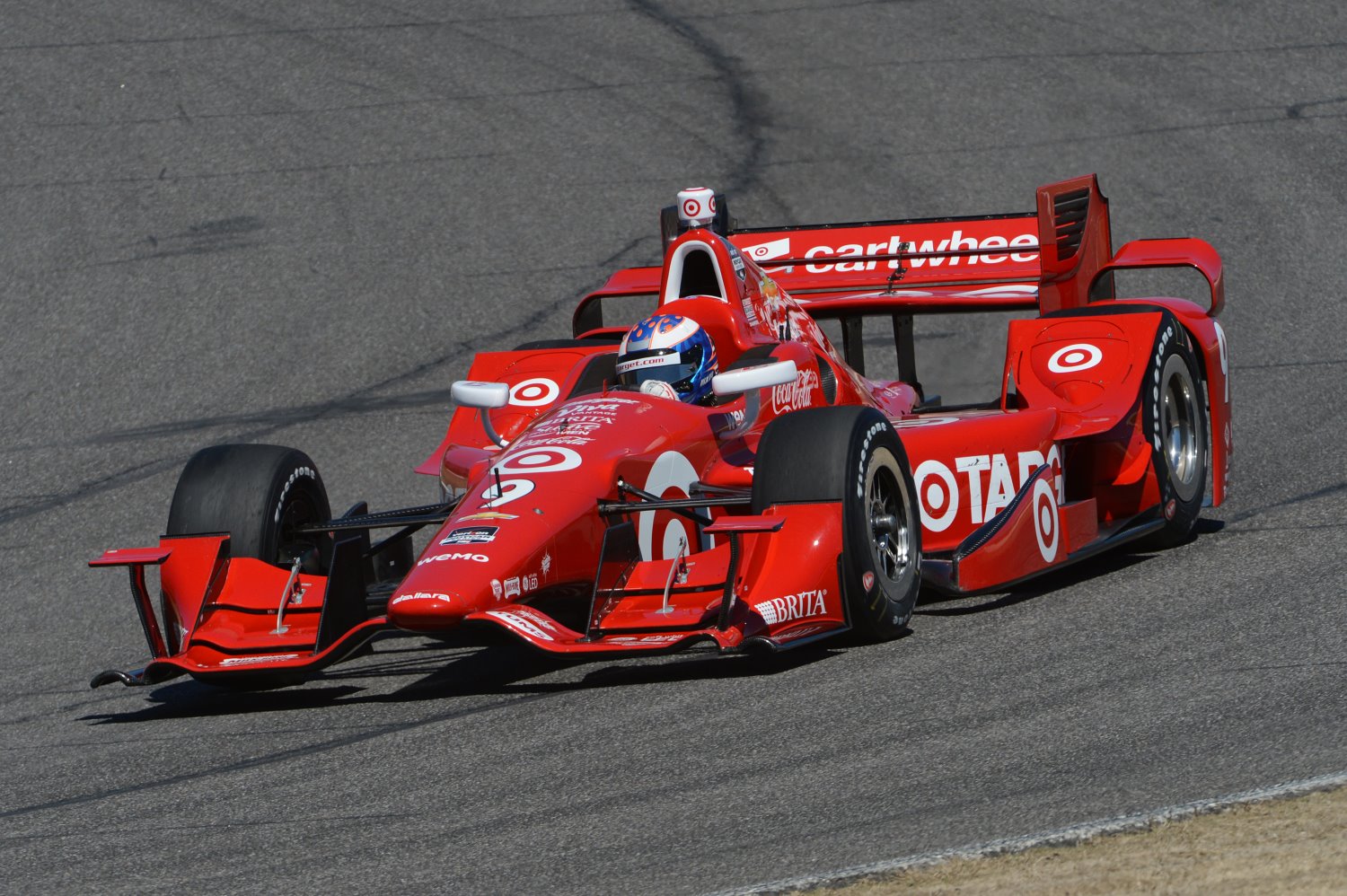 AN INTERVIEW WITH SCOTT DIXON, NO. 9 TARGET CHIP GANASSI RACING CHEVROLET, FASTEST IN COMBINED SESSIONS WITH LAP OF 1:07:4805/122.702 m.p.h.: "It's great to be back in the Target car. We tested NOLA Saturday, we're here this weekend at Barber and then go back to NOLA next week for the final pre-season test heading into St. Petersburg. We had a decent start to the day today finishing second overall in the first session. The cars have more downforce now and are a lot more demanding to drive. Some of the corners here in the old cars were almost flat, and now they're flat out when you go through them. If this is any indication of the speeds, I think you will see a lot of track records broken this season. I think the new cars with the aero kits look cooler now and hope the fans will like the changes for this year's season."

YOU TURNED A VERY QUICK LAP ON YOUR FINAL STRETCH. WERE YOU GETTING MORE COMFORTABLE WITH OR DID YOU FIGURE OUT SOMETHING?
"The car has been pretty decent all day. For some reason, it seemed like our car was really good on used tires. After lunch, we were on 26-lap tires and jumped to P3. The car was very consistent which was good. But then you get into a situation where you put new tires and you're barely going quicker. Luckily that didn't happen today. We're still struggling with balance issues, weight distribution and things like that – just trying to figure out some different things with the aero kit and with the loads changing significantly with cornering speed. All in all, it was a good day for us on the 9 car side. We still have plenty of test tomorrow and turn some laps to find some extra things for when we come back for the race."

WHAT ARE SOME OF YOUR FIRST IMPRESSIONS OF THE CHEVROLET AERO KIT?
"The biggest thing are obviously the looks for most people. Both cars look very different, which is exciting for fans and for the series. I don't really care what it looks like as long as it goes fast. It's been a significant change in drivability or the way you attack the car and the extra downforce you do have even though as per the rules there was a lot of grip taken away from the car with the hole in the floor and the underwing stuff that had been taken off. If those had stayed on, the car would be even quicker again by seconds per lap. It's been a great exercise for us on the Chevy side. Fingers crossed that everything runs smoothly. So far it's been pretty seamless. They've done a lot of homework so that's made it very good and very easy to hit the track."

IS THE SEAT TIME THIS WEEKEND GOING TO HELP YOU FOR SATURDAY (AT SEBRING)?
"It's quite a busy week. Obviously with the New Orleans test and these two days, then straight to Sebring for the 12-hour, and then another two days at New Orleans and then straight to St. Pete. I'm loving it. I haven't been in this situation since probably my early days in CART where I tested maybe 50 days a year. So it's a lot of fun and I'm very privileged to have those options and run. So yeah a lot of seat time. I just hope I can help the IMSA team out this coming weekend."

WITH THIS BEING YOUR SECOND YEAR WITH TONY (KANAAN), WHAT ARE LOOKING FOR FROM A TEAM DYNAMIC, AND WHAT CAN WE EXPECT FOR THE TEAM?
"There has been some pretty good shakeup in the team. Obviously on the engineering side a lot of people have moved around. I'm now working with Chris Simmons and Tony now has (xx) Malloy. Those dynamics change as well. It's kind of interesting because you approach weekends and days at the track a little bit different. You hope that it works out and plays well. With Tony and I, you get a better bond. You understand that if the 10 car is doing that, then the 9 car probably needs to do this and vice versa. He's always been great to work with – a super guy and a hell of a racer. We're hoping for big things from the team this year."

WHAT'S THE MOST DIFFICULT PART OF THIS TRACK, AND HAS IT CHANGED AT ALL FROM THE DW12 TO THE NEW AERO KITS?
"It's just going quicker and the balance has changed a little bit. I used to struggle with a lot of understeer here, and I kind of started that today. But with the tunability, it seems like we were able to get the car very loose this afternoon. I think the slow corners here are for me the most challenging and are areas where you can gain the most time – Turn 5 and Turn 9, and even Turn 2 and Turn 3. Those are always focuses for me. I can generally over-slow a car through most of those corners. But if you slow down even a mile-an-hour or two because of the slowness of it, it kills you a lot. Those are the tricky parts for me."

NEWGARDEN: "Today was fun. I'm not as tired today as we didn't do as many laps as we did a couple of days ago in New Orleans. We were a little limited on tires as we are only getting three sets per day, which I think helped on the neck and on the arms. I thought it was going to be a little more physical, and it is, but it's not atrocious. IndyCars have always been physical, I think they're only going to be brought up to the next level with these aero kits. I think we're going to be able to manage in the race.

Q: WHAT IS IT ABOUT THIS TRACK THAT MAKES IT A GOOD PLACE TO PREPARE FOR THE START OF THE VERIZON INDYCAR SERIES SEASON?

JOSEF NEWGARDEN: "The good thing is we're going to race here so it's always good to run at places where you're going to compete during the season. Barber is a very fast track and one of the tracks that fans will see the most out of the new aero kits. We got a preview of that at NOLA Motorsports Park over the weekend but I think here it's one that is fully loaded with downforce. It's going to be very physical around this place. It's such a demanding track that compares to others such as Sonoma Raceway and Mid-Ohio. It's good prep for the road courses with the new aero package."

Q: WHAT HAVE YOU EXPERIENCED ON TRACK WITH THE NEW AERO KIT?

SIMON PAGENAUD: "It's quite impressive to drive actually. First thing this morning the track was cool and the car already felt really good. Barber is a beautiful track for an aero kit of this level because it is flowing and has high-speed corners, and you're carrying a lot of downforce so the car is really hooked up to the track. It's a lot more physical than it already was, so that will be a challenge. But it's fun and now we're learning a lot of things for the race. It's interesting to try different items on the race car to know what to use for the race."

Q: WILL, THIS IS THE FIRST TIME YOU'VE BEEN WITH THE FULL FIELD IN A TEST SITUATION. HOW DOES THAT MAKE IT DIFFERENT?

WILL POWER: "I'm focusing on the job at hand here and trying to understand the new car and do what I did last year (win the series title). It's good to finally get going after a long offseason."

Q: DO YOU NOTICE THE ADDITIONAL DOWNFORCE OF THE NEW AERO PACKAGE?

JOSEF NEWGARDEN: "It's definitely more physical; the back of my neck is sore. The very first tire run there was a lot of grip on the track, but as the day is getting warmer there's less grip. The braking capacity of the car is much higher. Referencing the (track) markers, I'd say you cut off about 30 percent of the brake zone, so it's pretty significant on brakes."

SIMON PAGENAUD: "We knew the car with the aero kit was going to be more physical, and this track is probably the most demanding. It's always a challenge here, and it will show who has worked the hardest for sure."

TONY KANAAN, NO. 10 NTT DATA CHIP GANASSI RACING CHEVROLET: "It was a decent day out here today. It's always good to have four cars to pull from especially when we can all try different things. We were just trying to cover all of our bases today at the test, and Dixon was able to find a pretty good setup there at the end. It was a very productive day and I'm just pleased with the car and the way it performed. It feels good to be in my new colors with NTT DATA and I'm looking forward to getting more out of the car tomorrow."

SAGE KARAM, NO. 8 GE LED CHIP GANASSI RACING CHEVROLET: "Obviously that's not the way we wanted our Barber test experience to go with the accident. Early on in the test in Turn 14, I just made a mistake. It's a flat-out corner and the car bottomed out and I shouldn't have been carrying that much speed that early on. I tried to catch the car but it ended up hooking around and I went off and made contact with the wall. I'm just a little sore, but I know this team and I know myself. I'll learn from that and make sure it doesn't happen again. I'm just sorry for all the people that put in all the preparation to get this car ready and expected us to test and learn for the full two days."

CHARLIE KIMBALL, NO. 83 NOVOLOG FLEXPEN CHIP GANASSI RACING CHEVROLET: "It was a really good first day here at Barber. I love the new Chevy aero kit – it just looks great and it performs really well on the race track. We've been able to make a lot of adjustments through the heat of the day following what it will hopefully be like on race weekend with temperatures and air temp. Overall no hiccups or big issues, we're just figuring out the cars."

LUCA FILIPPI, NO. 20 FUZZY'S VODKA CARPENTER FISHER HARTMAN RACING CHEVROLET: "It was a productive day, it was my first day in the car with the new aero kits. This morning I had a lot to learn from the car itself and the circuit. It took a while to understand the circuit because it's actually quite tricky. We got better and better and this afternoon we finally able to work on the setup. I think we are going in the right direction. We found consistency and drivability. It's good for us to be here and get ready for the season and for this race in particular."