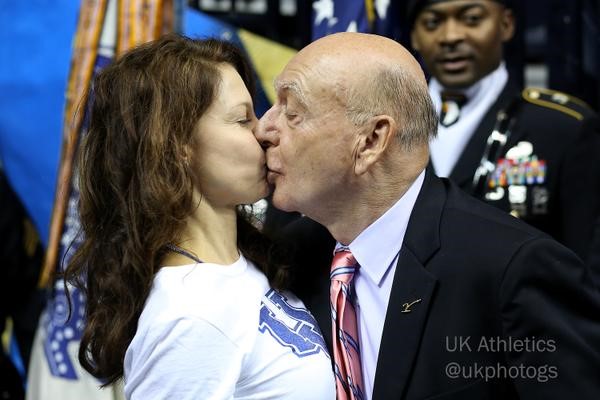 Sunday, Kentucky superfan and former wife of IndyCar driver Dario Franchitti Ashley Judd, who was clearly emotional during what was a rough SEC Tournament title game, tweeted during the second half that the Arkansas Razorbacks were playing "dirty" against her Wildcats.

Unfortunately, in response, Judd claims she was both called inappropriate names and threatened with sexual violence by a number of users. She tweeted her frustration afterwards, and showed her followers an example.

Monday, Judd, who has written in her memoirs about being a sexual abuse survivor, told MSNBC that she’ll be pressing charges on the users who sent her the tweets. She joined Thomas Roberts to talk about Kentucky’s chances in the NCAA Tournament and eventually got to the topic of social media.

Judd made no mention of how many Twitter users she'd be pressing charges against. Hopefully this makes people think twice before tweeting offensive messages at celebrities – or anyone else. Yardbarker.com [Editor's Note: Good thing Ashley isn't still in IndyCar, as their fans could be brutal as well]

Nothing is more jubilant for college basketball fans than the official start of March Madness.

In that spirit, we can hope, over-the-top ESPN analyst Dick Vitale went for the big laugh – with a big kiss.

Before the SEC championship game on Sunday, the Duke enthusiast certainly got the cheap chuckles he was looking for as the 75-year-old planted a kiss on the lips of an unsuspecting Ashley Judd.

The photo should make us all feel as uncomfortable as Judd looked, the long-time Kentucky fan and actress leaning back as Vitale leans in.
In the aftermath, the tone by most media was a tsk-tsk and a roll of the eyes. Oh, that Dickie V.

Kentucky athletics' photo staff found the moment so cheeky they tweeted the photo, calling it a "good luck smooch." USA Today tweeted, "Oh my. That's one heck of a kiss." The Washington Post described it as Vitale getting "a little frisky."

This isn’t something we should so casually laugh off. Why do we think it's cute, let alone acceptable, when old men are physically or verbally inappropriate with women, especially younger women?

This is wildly unprofessional for a broadcaster, but we’ll leave that argument alone as it’s well known that any virtues of journalistic objectivity by Vitale have long been shed for his “awesome, baby" shtick. This is an instance of a man – because of his age, because of his stature, because of his gender – displaying ownership over a woman’s body.

Besides the fact that he appeared sober, Vitale’s antics aren’t all that different than when Joe Namath leeringly and creepily told sideline reporter Suzy Kolber in 2007 that he wanted to kiss her as she interviewed him.

Kolber had to laugh it off, much like Judd did Sunday. Chicago Tribune