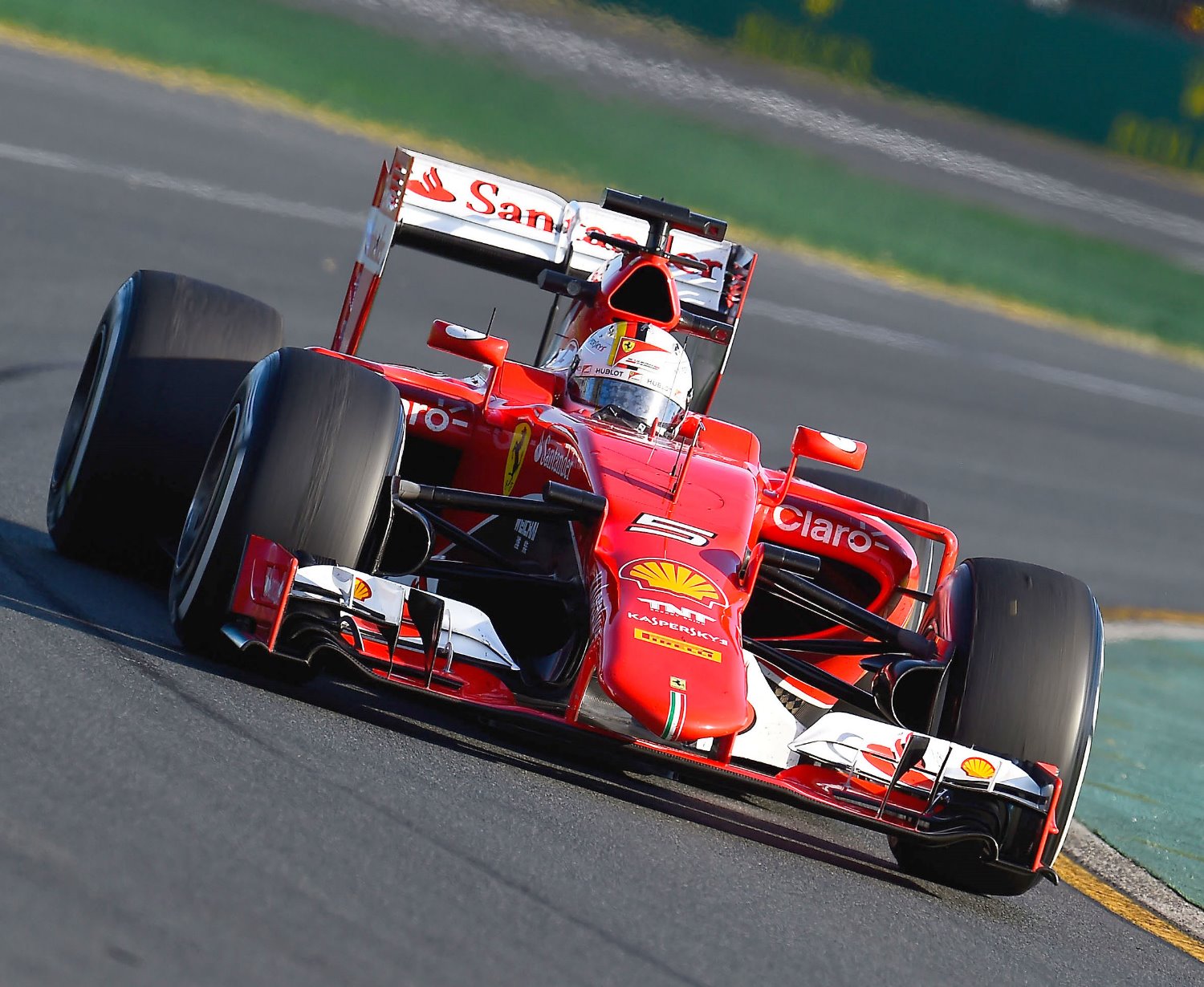 From courtroom battles to backmarkers stranded in the pits, cars breaking down before the race began and Mercedes' enormous technical advantage, the actual race was then unspectacular and all but a few runners were lapped.

"I feel a bit for the fans," admitted Ricciardo. "It was a boring race."

Sebastian Vettel, 34 seconds behind the two Mercedes at the end of the race, agreed: "For sure it's not great for the people.

"(Formula one) is a difficult challenge. It is complicated — maybe it got a bit too complicated."

"It can turn around a little bit for the next grand prix," Vettel said, "but it could be even worse."

Second on Sunday, Nico Rosberg acknowledged Mercedes' huge advantage in Melbourne but said he hopes Ferrari can catch up soon.

"Seriously?" Vettel hit back. "You finish 34 seconds ahead of us and you hope you will slow down?"

Rosberg, however, insisted he shares the same concerns as Ricciardo and Vettel about the health of F1.

"I hope you can give us a challenge," said the German, "because it's important for the sport and for the fans.

"A part of me always thinks about the show because I want to give people a great time at home watching on TV or at the track."

World champion Hamilton has broken up with his long-time girlfriend Nicole Scherzinger, while the newly-married Nico Rosberg's wife is expecting their first child.

"It has absolutely no influence," Mercedes team chairman and F1 legend Lauda told the German newspaper Bild am Sonntag.

"The story that you slow down when your wife is pregnant is complete nonsense," he said. "Formula one drivers are true professionals who want nothing else than to win. It's what they are paid for."

As for the heart-on-the-sleeve Hamilton's personal life, Lauda explained: "I have talked to Lewis about it.

"Whether he has brought his private life in order or not is very much overrated by journalists," said the triple world champion. "Lewis simply gets in the car and does his job."

Part of Hamilton's job at present is to personally negotiate a new contract, but Lauda denied that the protracted talks have stalled and might fail altogether.

"Not at all," said the great Austrian. "Everything is very relaxed.

"He negotiates very well, and we do too. Lewis will be with us in 2016, definitely."

Mercedes kicked off its 2015 campaign in utterly dominant style on Sunday, but team boss Toto Wolff vowed to keep his feet on the ground.

"From the pure performance of the car," he told German television, "we are probably in a separate category but Ferrari showed today that they have made a big leap.

"They have all the resources and the people to be able to keep improving," added Wolff.

Newly switched from karting to F4, the 15-year-old son of the most successful grand prix driver of all time began his pre-season test program at the Lausitzring by losing control at 160kph, the major German daily Welt reports.

"The accident was mild and he ended up unhurt in the gravel," the report said.

The very fact a 'mild' incident warranted a headline at all is a sign of what is to come for the young Schumacher, who was skiing with his father Michael when the F1 legend fell and injured his brain in the final days of 2013.

But "all the hype surrounding his name will not help him now", Haug said.

Sebastian Vettel, a close friend and protege of the great seven time world champion Michael Schumacher, agreed that sharing a surname with his famous father will be challenging for Mick.

"The switch from karting to cars is hard enough," said Vettel, "and his burden will be even bigger."

Officially, the FIA has scheduled a race for mid-July, but Bernie Ecclestone had made clear commercial talks with the Nurburgring or alternative venue Hockenheim were faltering.

Now, the 84-year-old F1 supremo has told The Independent: "The German grand prix is dead at the moment.

"As with any race, if it is cancelled it is cancelled. There's not much we can do," F1 business journalist Christian Sylt quoted the diminutive Briton as saying.

If true, 2015 will be the first time in six decades that Germany has not hosted a round of motor racing's ultimate category.

"Without saying 'Scheisse' (shit), it is a shame," he is quoted by the SID news agency.

"We have three German drivers (in F1), a German manufacturer, a lot of history."

That is the view of former F1 driver Mika Salo, as the new Ferrari pairing went head-to-head for the first time in Melbourne.

Salo's Finnish countryman Raikkonen was slightly behind Vettel's pace throughout the 2015 season opener, even though it was the German's first race in red.

"The car is good," former Ferrari driver Salo told the Finnish broadcaster MTV3, "but hopefully Kimi can get to the bottom of his problem."

On the other hand, Vettel's Ferrari debut has been smooth, as he kicked off his arrival at the fabled team by narrowly outqualifying Raikkonen and finishing 30 seconds behind the dominant Mercedes and on the podium on Sunday.

"It is surprising," Salo agreed. "There is not much testing and he is there immediately, but the best drivers can adapt to any car."

The Spanish rookie was nominated by the resurrected former Marussia team to race in Melbourne, but Manor ultimately did not even turn a wheel.

"I assure you that we have not paid to be here," Merhi's father and namesake said in Melbourne.

But Spain's El Mundo now reports that Manor is asking Merhi, 23, to find EUR 2 million to keep the race seat in 2015.

Manor was summoned by the FIA after qualifying to explain its failure to even attempt to qualify in Melbourne.

Amid skepticism about the real reasons for Manor's engine silence, the FIA investigated the matter and found that the explanation about deleted software was true.

Merhi snr insisted: "The project is viable. We have been assured."

Merhi told Spain's AS newspaper he is "fairly confident" he will be back in action in Malaysia in two weeks.

"The team is like a family," he said. "They have treated me very well this weekend.

"Today I am a team driver, so in Malaysia we will be participating.

"The car was prepared at the last minute and super-late efforts were made, but it was a miracle that we even came here.

"We didn't drive, it's a shame, but the team is working hard to stay on the track for Malaysia.

"We didn't do the pre-season tests, so the first race is in Malaysia. Hopefully we can be on track and do a good job," Merhi added.

Susie Wolff not on pole to replace Bottas
(GMM) Williams has played down suggestions Susie Wolff is now in pole position to make her F1 debut.

After missing the Melbourne season opener with a torn disc in his back, Valtteri Bottas is now in doubt for the Malaysian grand prix in two weeks.

"We don't have a reserve driver at present."

Indeed, while much was made of 32-year-old Wolff's 2015 program earlier this month, including two Friday practice sessions, she is officially only a 'test driver'.

As to who is the frontrunner to replace Bottas at Sepang should he be unfit, Symonds answered: "We're looking at some plans."

Massa calls for Mercedes engine parity
Felipe Massa says it is important Williams receives the same engine as Mercedes after being surprised by the gap in the Australian Grand Prix.

Having started from third place, Massa was powerless to chase Lewis Hamilton and Nico Rosberg as they eased away at the front of the field. Williams was eventually beaten to third place by Sebastian Vettel's Ferrari and Massa – who was the only Williams in the race due to Valtteri Bottas' injury – believes the gap enjoyed by Mercedes shows it has a different specification of engine to its customers.

"For sure it was a shame not to have both cars today in the race but I really think it was important to start the season scoring good points," Massa said. "I'm sure we're going to be in good shape at the next races as well, so we're pushing hard with the car to improve the car.

"We're pushing hard with the engine which I'm sure has some improvements that we can have and are pushing to have, because for sure the difference is too big. So I really hope that we really have the same engine, which I really don't see why we don't have.

"Why would Mercedes help Ferrari? So we need to have the best they can give, and we will work on that. On the car we know that every race and whatever points you're not getting, it counts.