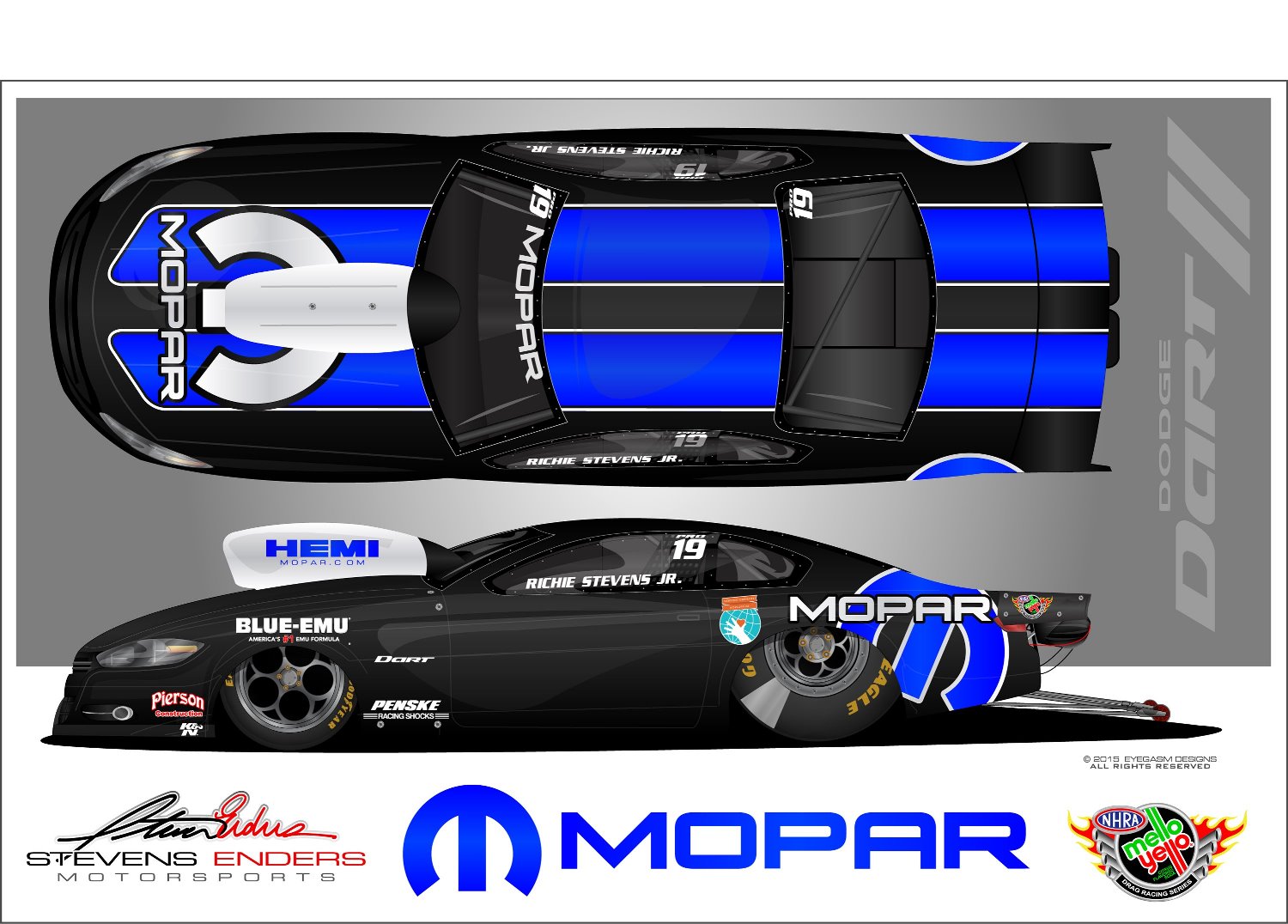 Mopar fans will see another Dodge Dart hit the drag strip this season in the National Hot Rod Association (NHRA) Pro Stock class, as driver Ritchie Stevens Jr. prepares to take the wheel of his Mopar for at least ten events as a teammate to 2012 NHRA Pro Stock World Champion Allen Johnson.

The New Orleans native will field a new Dodge Dart chassis prepared by Jerry Haas and a HEMI engine tuned by Roy Johnson of Johnson & Johnson Racing, to mark his return to Pro Stock competition this April at the NHRA SpringNationals in Houston.

"I'm really excited and just can't wait because my best times on track were racing with Allen [Johnson] as a teammate, and I'm really happy to get back to that," said Stevens, whose last full season of NHRA competition was with Don Schumacher Racing in 2007 aboard a Dodge Stratus with Johnson as his Mopar teammate.

Johnson & Johnson Racing's Adam Hornberger will perform double duty as crew chief for both Allen Johnson and Ritchie Stevens, while Tom Pierson will take on duties as car chief for the additional Dodge Dart entry.

"The last couple of years have been up and down racing-wise but I'm really looking forward to working with Allen again and with [crew chief] Adam Hornberger, who is talented and just as laid back as I am," Stevens said. "The cars will be the same, but we'll try different things and try to help AJ compete for another championship by running at as many events as we can. I'll definitely be racing to win and I expect to have some fun out there."

"It'll always be interesting to face my wife when the occasion presents itself, but we'll race heads-up like we did last year when we were on the same team for a few races," adds Stevens, in reference to possible on-track battles against his wife and 2014 NHRA Pro Stock champ, Erica Enders-Stevens.

It's a win-win situation for Mopar, one that adds a past winner to the fold for the 2015 season, even on a limited basis, to gather more data and help both drivers be more competitive on race days. The move also improves the chances of bringing home another NHRA Pro Stock World Championship for the brand after back-to-back championship wins by Allen Johnson and Jeg Coughlin Jr., respectively, in 2012 and 2013.

"The benefits for our Mopar team are exponential because we now have two cars to try stuff with," Allen Johnson said. "Having Richie [Stevens] as a teammate and a second car will give us more experience and help us try things to take us further than we could as a one-car effort with just the Magneti Marelli/Mopar Dodge Dart. Any time we can have more Mopar cars in the field to go to battle with, the better it is."

Stevens' HEMI-powered Dodge Dart will carry a familiar Mopar brand livery look with support from Blue Emu, as well as a continued relationship to bring awareness to Serving Orphans Worldwide. Familiar supporters such as Pierson Construction, Penske Shocks and Stevens Collision Center will also be onboard. A longtime silent and committed partner will also be along for the ride for the 2015 races, but Stevens and his team will continue to seek out additional sponsorship opportunities in order to compete in additional events this season.

Stevens joins Allen Johnson in flying the Mopar banner aboard their Dodge Darts, with Vieri Gaines and Deric Kramer rounding out the HEMI-powered entries competing this season in the NHRA Pro Stock category.