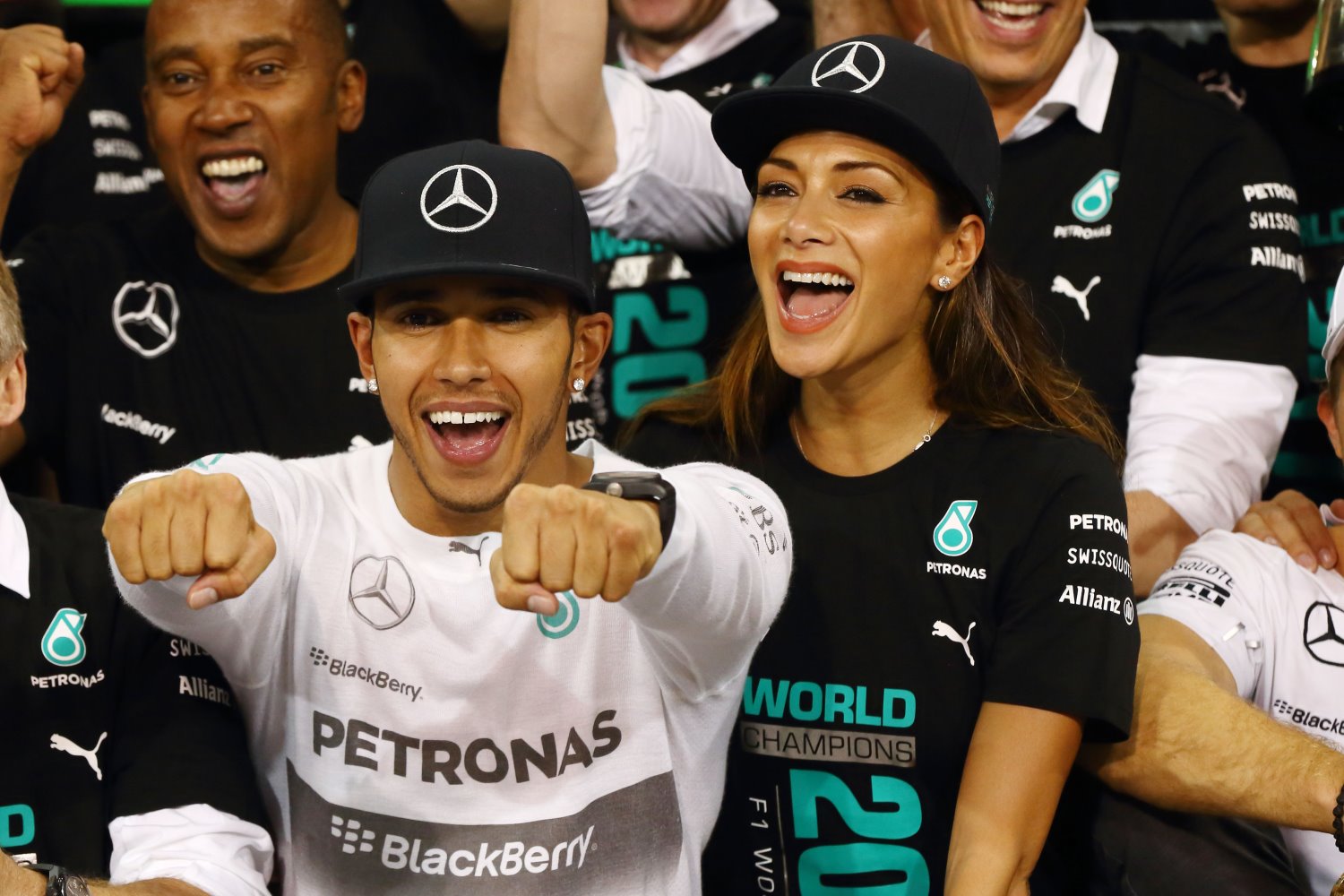 Hamilton focused despite Scherzinger split
(GMM) Lewis Hamilton has played down any suggestion his split from long-time girlfriend Nicole Scherzinger could affect his performance in 2015.

In the past, the often controversial and emotional Briton's personal struggles have arguably interfered with his focus on formula one.

So his latest split from Scherzinger might give his Mercedes teammate Nico Rosberg hope that Hamilton's career-topping form of 2014 is in doubt this year.

Rosberg joked to Bild am Sonntag newspaper: "He (Ecclestone) also told me the result of this season, and I am very happy about it."

But although he admitted that personal turmoil might have affected him in the past, Hamilton insists he now has the maturity to keep his eye on the track.

"I think last year I adopted a mental attitude that I would like to say is impenetrable," he told British reporters.

"Of course, in previous years it's been the case where it's affected my life in general, but I feel that I can still carry that kind of mentality from last year," Hamilton explained.

That is the view of former team driver Martin Brundle, observing that McLaren has struggled simply to run its newly works Honda-powered MP4-30 in testing.

Not only that, star recruit Fernando Alonso is missing the Melbourne season opener, amid rampant speculation about the cause of his Barcelona crash.

"There are even a few people saying Alonso doesn't want to get in it yet," Brundle, now a leading British television commentator, told the Express newspaper.

"They are in terrible trouble, aren't they?"

But he insists team supremo Ron Dennis is confident the British-Japanese collaboration will eventually succeed.

"You would think so," said Brundle. "Ron says to me that they (Honda) have the best facilities that he has ever seen.

"It looks like they have some misery at the beginning but I wouldn't write them off for the whole season."

Now reborn as Manor Marussia, the outfit is touching down in Melbourne this week having emerged from administration thanks to support from creditors including McLaren and Ferrari.

But another creditor, according to the Telegraph newspaper, is the UK tax collector HM Revenue and Customs.

The newspaper article's co-author Christian Sylt told us Marussia owes $1.5m in taxes, with HM Revenue and Customs having "voted against the team exiting administration and racing this year".

Although ousted last year, it was Domenicali who signed Raikkonen to be Fernando Alonso's teammate in 2014.

The Finn struggled alongside the Spaniard, but his contract for 2015 has been honored and this year Raikkonen is paired with friend Sebastian Vettel.

Interestingly, Vettel revealed last week that his own first contacts with Ferrari date all the way back to talks with Domenicali in 2008 and 2010.

On Raikkonen, however, Domenicali said: "I have never regretted bringing Raikkonen back to Maranello.

"It was the right decision in 2013 and I would do it again," he told the blog of F1 insider Leo Turrini.

As for Vettel, Domenicali admitted: "I have never hidden my admiration for Sebastian. It would have been great to work in the same garage as him, but it didn't work out that way."

What ultimately transpired is that Ferrari ousted the 49-year-old Italian, but Domenicali now works for the German carmaker Audi.

He insists he is happy with his new role.

"Ah, you want to know what competitive programs Audi will have in the future?" Domenicali smiled to Turrini. "Come to Ingolstadt and I will tell you."

Nurburgring 'not willing to pay fee' – Ecclestone
(GMM) The fate of the 2015 German grand prix is a simple matter of "the fee".

That is the claim of Bernie Ecclestone, who is set to imminently decide if the country will be removed from the F1 calendar for the first time in decades.

Officially, the Nurburgring is scheduled to host the July race.

"I am happy to hold a grand prix at the Nurburgring," Ecclestone told the German news agency DPA. "The promoters know it and we have met to discuss it.

"The problem is that they are not willing to pay the fee," he added.

Van der Garde drive would be 'dangerous' – Sauber
(GMM) Sauber has argued that letting Giedo van der Garde race in Melbourne would be a safety risk.

On Monday, Dutch driver van der Garde's case against the Swiss team was heard by the supreme court in Melbourne.

Both sides acknowledge that the 29-year-old has a valid contract to race this year, but Sauber signed the higher-paying Marcus Ericsson and Felipe Nasr instead as the Hinwil based team struggled for financial survival.

The team's lawyer told the Melbourne court on Monday that allowing the Dutchman to race this weekend would be dangerous because the C34 car is designed only for the bodies of Ericsson and Nasr.

Ericsson and Nasr were both present in court, as was van der Garde.

The Sauber lawyer said the 2015 Sauber reaches speeds "in excess of 300kph", exposing its occupants to forces of "up to five times their bodyweight".

"Mr. Van der Garde has no experience driving the C34 Ferrari and would not have sufficient time to learn," Rodney Garratt QC told the judge, according to The Australian newspaper.

Sauber has also said it does not even have the right seatbelt in Melbourne for van der Garde, making it "reckless and dangerous" to let him drive, the lawyer told the judge, according to local broadcaster ABC.

"It (letting him race) would result in an unacceptable risk of physical harm or even death" not just for van der Garde but also spectators, Garratt reportedly said.

The judge is yet to rule.

Before the hearing, van der Garde and his management declined to comment, according to the Dutch newspaper De Telegraaf.

"But we will do everything to defend the interests of Sauber. We have a difficult year behind us, but have made every effort to create a good situation for 2015," she said.

It is Jacques Villeneuve, who is quoted by Italian publications as saying the German marque's advantage of 2014 was too big for its rivals to track down in just a single winter.

So he is happy, therefore, that the gap between Mercedes and its chasers Williams, Ferrari and Red Bull remains apparently large.

"The best battles in F1 were between teammates," Villeneuve is quoted by Italy's Tuttosport. "Like Prost and Senna.

"So it's better that there is more of a difference between the Mercedes and the other teams, so that they (Mercedes) don't have to issue team orders.

"Instead, the two Mercedes drivers can battle right to the end," he added.

The 29-year-old asked the Victorian supreme court to enforce a recent arbitration ruling in Switzerland, having found that van der Garde's contract to race with Sauber this year is valid.

Sauber's lawyer on Monday argued that compelling the Swiss team to unseat Marcus Ericsson or Felipe Nasr at such short notice was "dangerous", as at least a two-week period of adapting the car for van der Garde would be necessary.

Van der Garde's lawyer hit back that Sauber would actually only need mere days to ready the car.

In fact, van der Garde may run out of time to be ready to drive in Melbourne.

That is because the Australian judge on Monday reportedly reserved his judgment until 10am on Wednesday. The court officially confirmed the news.

That would leave only two days before Friday free practice at Albert Park.

Like van der Garde, Brazilian Nasr and Swede Ericsson were present in court on Monday, and their lawyer said the Sauber race duo was surprised by the Dutchman's legal action.