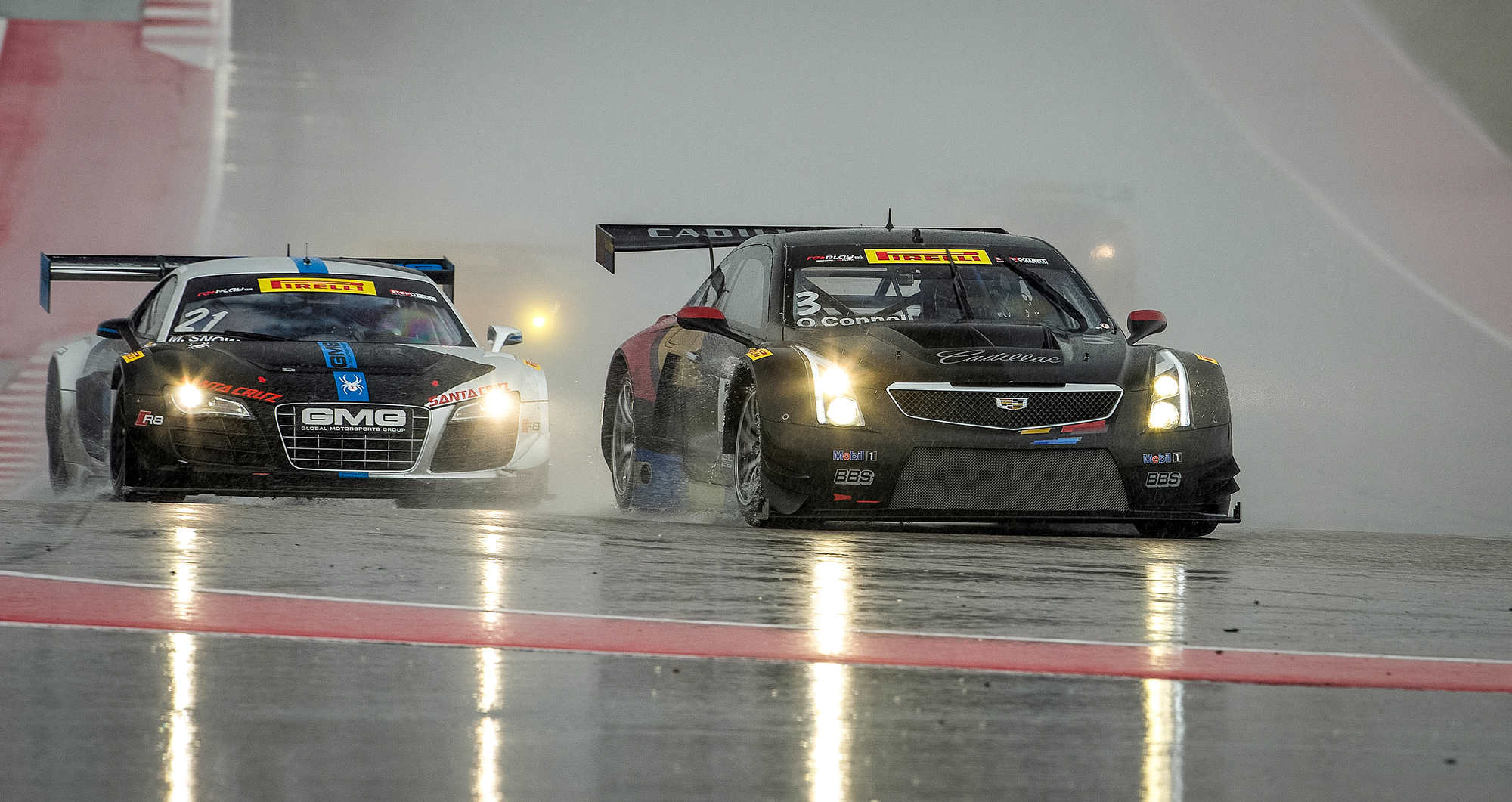 Michael Cooper, of Syosset, NY, the 2012 Touring Car Champion, scored his first career GTS series race win in Round 2 at the Circuit of the Americas, and the Nissan Grand Prix of Texas brought to you by Motul. Ben Clucas, of Northampton, England, in the No. 36 Kia Motors America/Kinetic Motorsports/Kia Racing, Kia Optima finished second, while Andrew Aquilante, of Chester Springs, PA, in the No. 32 Calvert Dynamics/Phoenix Performance Ford Mustang Boss 302 finished third.

With rain falling for the start of the race and a wet track, Pirelli World Challenge Race Control set a double file rolling start in place of the traditional series standing start. Pole sitter Kris Wilson, of Monument, CO, in the No. 07 TRG-AMR Aston Martin Vantage GT4 and second on the grid Aquilante, picked up the battle from where they left it in Saturday's Round 1 race, with Wilson and Aquilante going side by side for most of turns 1, 2 and 3. Third on the grid, Dean Martin, of Westland, MI, in the No. 50 Rehagen Racing/Picture Cars East Ford Boss 302 following on the bumpers of both Aquilante and Wilson.

In a display of wet driving prowess, big mover on lap 1 was Cooper in the No. 10 Blackdog Speed Shop Chevrolet Z28 who rocketed up from ninth on the grid to challenge Martin for third mid-way through lap 1. By the end of lap 1, Cooper had passed both Martin and Aquilante and set his sights on Wilson. By turn 19, Cooper passed Wilson for the lead.

Lap three saw the battle for third go three wide across the stripe with Martin getting the advantage out of turn 1 and Clucas getting by Wilson for fourth. Jack Roush Jr., of Lavonia, MI. in the No. 60 Roush Performance Capaldi Racing Ford Boss302 also passed Wilson who lost three positions in a lap dropping from third to sixth.

By lap 5, Cooper stretched his lead to 10 seconds followed by Aquilante, Martin, Clucas, and Roush Jr. Aquilante then started to solidify his second position as Roush Jr. put pressure on Clucas for fourth. Cooper continued to set fast laps establishing a gap of more than 12 seconds ahead of Aquilante.

On Lap 9, Cooper remained out front by over 12 seconds followed by Aquilante who held a gap of over three seconds over Martin, with Clucas now starting to close the gap. The race was now on for third between Martin's V8 rear-wheel drive Mustang and Clucas's V6 front-wheel drive Kia. Clucas passed Martin at turn 11 but the No. 50 car driver re-passed retaking the position. On lap 11, Clucas passed Martin for good and set a charge to catch Aquilante for second. On lap 12, Clucas had closed the gap to 2.5 seconds on Aquilante and on lap 13 cut another second off the distance to Aquilante. Now hot on the heels of Aquilante, Clucas passed Aquilante at turn 11 only for Aquilante to retake his position. Nose to tail up the front straight Clucas made a move in turn one taking second.

With four to go, Clucas was behind Cooper by over 11 seconds but was running more than a second faster than the leader. Behind them a three-way battle for third continued with Aquilante, leading Martin and Roush Jr. With two to go Clucas had cut the distance to Cooper in half but the clock was not in his favor and he settled for a second, and his first career podium in the series. Aquilante finished third, ahead of Martin in fourth, followed by Roush Jr. in fifth.

Cooper won a number of awards including the Optima Batteries Best Start for gaining six positions on the first lap as well as the VP Racing Fuels Hard Charger Award for gaining eight positions during the race.

"I was planning on biding my time being pretty patient not knowing how quickly I may be able to pass people, but once everyone went inside around the corners I just took the outside line as there was so much more grip out there," said Cooper. "I think those guys figured it out towards the end of the race and started to catch me."

"The Kia was fantastic," said Clucas. "In this morning's warm-up we struggled a bit. So I didn't really know how we were going to fair. Kinetic did a fantastic job making changes to the car and we were worried a little bit that we wouldn't make pre-grid. We were changing a lot. When we got out there it was like night and day and I was able to maintain a really good pace and I managed to pick my way up to second."

"It was a little bit nerve racking looking at the weather radar because we are new to the Pirelli tire, having never been on their rain tires," said Aquilante. "We went out in warm up and pretty much did the same thing as the Kias, we were scrambling to make some changes and they were pretty good early on, but we were suffering towards the end of the race. Have to thank Dean Martin for racing me clean, I was trying everything I could to keep him behind me."

Of note, Roush Jr. was awarded the Invisible Glass Clean Pass of the Race Award for passing Mark Wilkins, of Toronto, ON in the No. 38 Kia Motors America/Kinetic Motorsports/Kia Racing, Kia Optima. The Cadillac Move of the Race was awarded to Clucas for his pass on Aquilante for second place on lap 10.

GTS teams now head to St. Petersburg for Round 3 of the Championship. Watch GTS Rounds 1 and 2 on CBS Sports Network, Saturday, March 14 at 11am eastern.

Results are provisional until posted final.