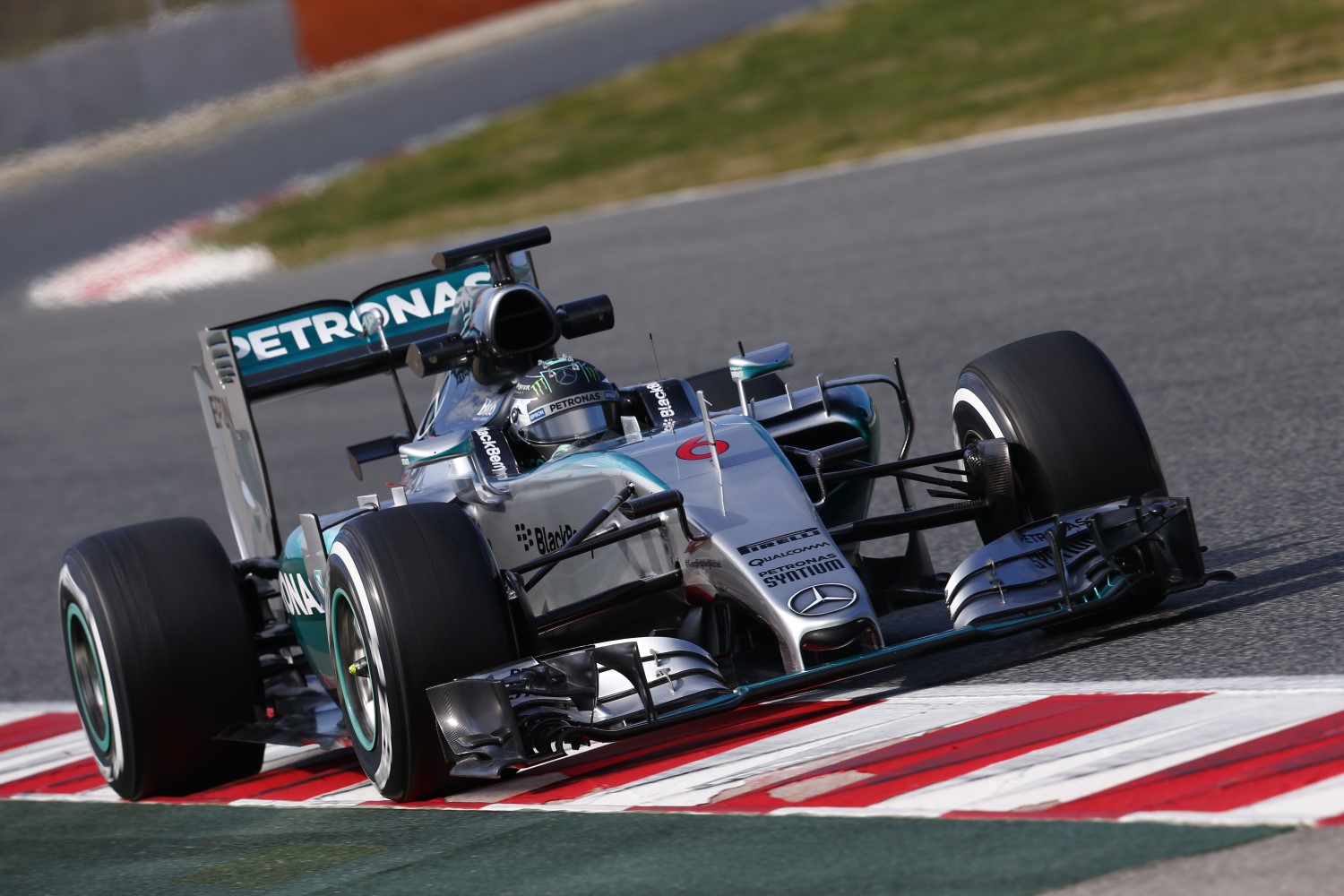 Mercedes to 'help' save German GP – Wolff
(GMM) Concerns are growing that Germany really will be dropped from the 2015 calendar.

Officially, the country is still set to host a grand prix in July, but neither the Nurburgring or Hockenheim are actually yet to agree a concrete race deal with Bernie Ecclestone.

Mercedes team chairman Niki Lauda admits the chances of that happening are no better than "50-50".

Lauda's colleague Toto Wolff, the head of Mercedes motor sport, said at the Barcelona test on Saturday that while the problem is mainly financial, the German marque could have some involvement in the talks.

"It is not our area to intervene in the talks between promoter and rights holder," he said, "but as far as we are able to, we will try to help.

"It is an important grand prix for us," added Wolff.

And that is not just because the backmarker Manor's planned resurrection in Melbourne is not yet confirmed.

Force India, for instance, has only just got its 2015 car up and running, after months of rumors of near-terminal financial and supplier problems.

"We have had cash-flow issues, there is no question about that," deputy boss Bob Fernley admitted to Sky.

"It's tough for all the independent teams."

Indeed, rumors swirling in the Barcelona paddock this week suggest that only five or six teams can actually be relied upon to definitely make it to Melbourne in two weeks and then stay alive for the whole of the season.

Amid that backdrop, Bernie Ecclestone met recently in London with bosses of the struggling Lotus, Force India and Sauber teams, according to Auto Motor und Sport.

They reportedly warned the F1 supremo that, as a worst case scenario, they might not even be in Melbourne due to a "cash-flow" crisis.

Lotus owner Gerard Lopez explains: "The months of November, December and January are the worst, as during this phase of design and production you spend 43 per cent of your budget with nothing coming in from the outside."

That is precisely what happened to Force India, some of whose crucial suppliers suddenly began to demand upfront payments.

A voice at the Silverstone based team said: "From April we have no problem, as money starts flowing again. Anyway, we will be at the start in Melbourne."

At the meeting, a return to V8 engines was ruled out, but while proposals to make the sport louder and more powerful were discussed, no decisions were taken.

McLaren expecting Alonso health news 'soon'
(GMM) McLaren boss Eric Boullier is confident the Woking team will not be without its star driver for the Melbourne season opener in two weeks.

The recovering Fernando Alonso's last-minute substitute at the final Barcelona test this week was Kevin Magnussen, who managed just 39 laps on Saturday before more technical trouble struck for the newly Honda-powered MP4-30.

He admitted he is not sure he would be ready to step into Alonso's race seat in Melbourne.

"It would be difficult," said the Dane, "as I have not had a dedicated team of engineers to talk to about the car every day."

Given the coup of luring the highly-rated Alonso from Ferrari to spearhead the new McLaren-Honda project, not having the 33-year-old in the car from the first race would be a major blow for the team.

Asked when McLaren will know for sure, Frenchman Boullier answered: "Soon.

"I think as soon as the green light is given by the doctors, so it should be next week. It's not in my hands, but there is nothing wrong (with him)," the McLaren team boss added.

Alonso's former Ferrari teammate Felipe Massa, however, urged the Spaniard not to rush back to action. In 2009, the Brazilian was almost killed when a spring struck him on the front of his helmet during qualifying in Hungary.

"In the end," Massa told Spain's Marca at the Barcelona test, "what matters is not whether he is here at the beginning of the season or not, but that he is fine.

"I have written to him and talked to his manager and all he cared about was his health," he added.

Lingering questions remain over the mysterious circumstances of Alonso's testing crash exactly a week ago, but McLaren has now put the investigation into the governing FIA's hands.

"I find that, in my experience, no matter what you do or say, someone will always question you," said Boullier, "or – even worse – invent their own story.

"However," he is quoted by Finland's Turun Sanomat, "there is data and undeniable facts, and that is what the FIA is looking at."

While the rest of the sport gets up to speed for the second year of F1's challenging new 'power unit' era, the newly Honda-powered team is struggling not only for pace but also simply to run the new MP4-30.

But with Fernando Alonso still recovering from his Barcelona crash a week ago, reserve Kevin Magnussen got his first taste of the 2015 package on Saturday and declared it better than last year's Mercedes-powered car.

"It is a good base," he said, "and feels more consistent, stable and predictable than its predecessor. The drivability is better.

"Last year's car was very pointy and hard to drive," said the Dane.

"Overall, on the aerodynamic and mechanical side, the car feels good."

Magnussen did, however, admit that McLaren has been unable to develop the car over the Jerez and Barcelona running to schedule, meaning the MP4-30 currently has "probably less grip" than the fully-developed 2014 machine.

He was speaking on Saturday, on the eve of the end of the 12 days of winter testing and just two weeks before the season opener in Melbourne.

"We won't be as ready as we would like," admitted team boss Eric Boullier, "but we will do our best.

"The positive is everything is working, but reliability is a concern, clearly," said the Frenchman.

"I don't know how long it's going to take. I think a few races but at least by Europe we should be ready to be more competitive," Boullier added.

Mercedes in 'another dimension' – Ricciardo
(GMM) Earlier, Daniel Ricciardo was planning a full title tilt for 2015.

Now, he is in little doubt: "The two Mercedes will on the front row in Melbourne," the Red Bull driver said confidently in Barcelona.

He was speaking on Saturday, on the eve of the final day of winter testing. In the paddock, word went around that Adrian Newey will attend on Sunday.

That must mean Red Bull is set to run its final Melbourne-spec configuration of the RB11, although Ricciardo admits it will at least initially not be a Mercedes-beater.

"They (Mercedes) are in another dimension," said the 25-year-old, who was the only non silver-clad driver to win grands prix in 2014.

He says the 2015 Red Bull is better than its predecessor, and the recent drivability issue with the more powerful Renault engine has been improved.

"But we need to keep working on it," said Ricciardo.

So for now, he predicts Mercedes to run around at the front, followed by "Ferrari, Williams or us".

Nico Rosberg's test pace on Friday utterly stunned the paddock, and teammate Lewis Hamilton kept the new Mercedes at the top of the times on Saturday.

"Like most," admitted Williams' technical boss Pat Symonds, "I was surprised by the laptime on Friday.

"I think we have an idea of how good the Mercedes is," he is quoted by Speed Week. "It was impressive.

"Behind them are ourselves, Ferrari and Red Bull, and in terms of performance we are very close to each other I think," added Symonds.

Who finishes second best in Melbourne is one question that will be answered in just two weeks. The other is how big the gap to Mercedes is.

"The problem is not knowing what Mercedes has done," said Red Bull team boss Christian Horner, according to the Finnish broadcaster MTV3.

"I am sure they have not been sitting still over the winter."

He warned: "If they have gained 50 horse power more in Melbourne, then we are all in trouble."