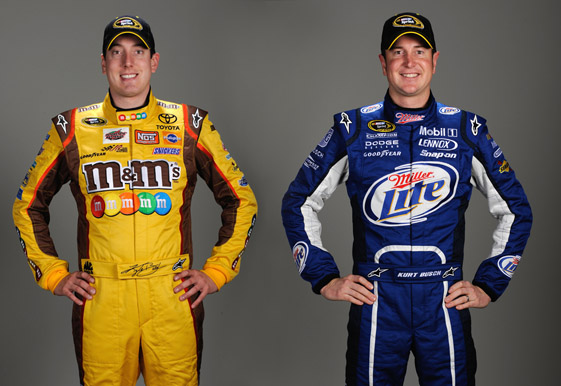 Kyle Busch said Monday he has not gotten involved in his older brother's personal issues and is disappointed he has been mistaken for Kurt in coverage of assault allegations against the 2004 NASCAR champion. #41-Kurt Busch spent four days over the last two months in a Delaware courtroom as part of a hearing regarding an ex-girlfriend's request for a no-contact order. Patricia Driscoll alleged Busch assaulted her in September during an argument at Dover International Speedway.

"Haven't spoken to him, don't know nothing; trying to stay away from it all and let him handle his business," Kyle Busch said. But he's been dragged into it as the case drew national attention earlier this month when Kurt Busch testified he believes Driscoll is a trained assassin. In several instances, Kyle has been wrongly identified as his brother.

"I think it's stupid. I think people need to do a little bit more background before they write names or say names if they don't know what the heck they are talking about," Kyle said.

"It's not that hard to differentiate between two people that have the same last name. I think people need to do a better job and not be so slackish. It hasn't been bothersome from a sponsorship standpoint, yet, that I know of. I know it could be if it continues to keep going, but it's the wrong brother. But I think the relationship I have with the Mars family is far beyond that, hopefully." ESPN/AP