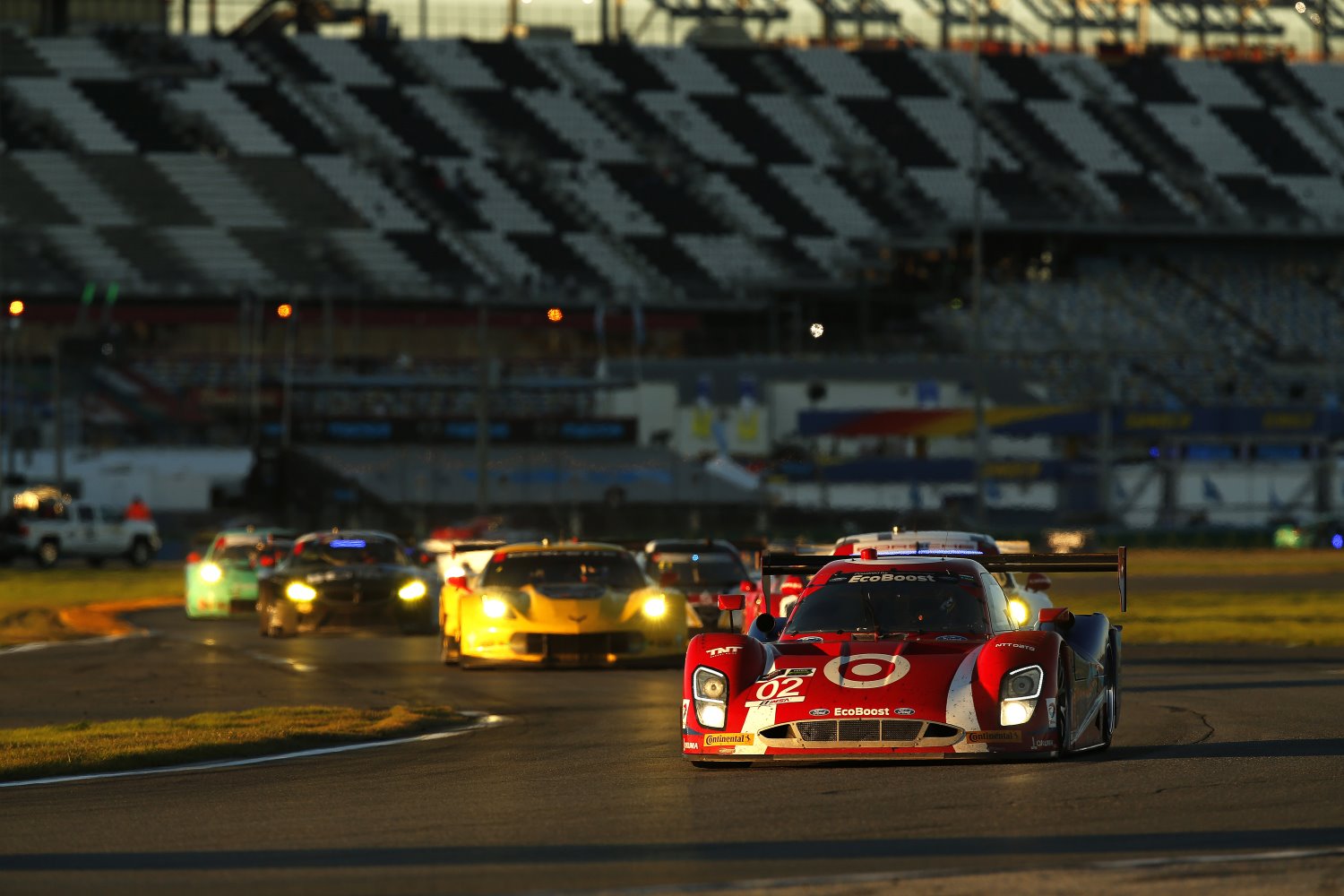 SCOTT DIXON, No. 02 Target/Ford EcoBoost Riley, Chip Ganassi Racing with Felix Sabates: "I think for all of us, this is such a team event. It's obviously 24 hours, we have a mix of team personnel from the different teams that Chip has and Felix, and then the driver combination, too. So I think getting to the point, you just want to do the best you can for everybody in the team. In the (Verizon) IndyCar (Series) side, or whether it's the NASCAR side, it might be your call at the end and you're going to race for the win, but for us it's for all of us up here. We've had a lot of fun the last two years. For me I think my first Rolex was in 2004, I've had a lot of fun coming here. I've have only had the chance to win it once before now and that was with Casey Mears and Dan Wheldon back in 2006.

"The last two days was a lot of fun, the car was very consistent and I think we had good speed. Everybody pulled their weight, everyone did what they needed to do, and that's what gets you through this 24 hours. Everyone kept the car in one piece. You have to be there at the end, you've got to try to look after the car so you have the speed to try to compete for the win."Â�

CHIP GANASSI, Team Owner, Chip Ganassi Racing with Felix Sabates: ""It starts with Felix, my partner, and it starts with this guy on my left here, Mike Hull. No story about any records at this team would be complete without mentioning their name in the same breath, it's that simple. I don't put the teams together, I don't change the tires, I don't build the engines. I've said this before, I don't do the pit stops, this guy on my left does that. He's my brother from another mother, I guess. You have to start with that really. It's a great honor."Â�

""As a driver, you always want to be in the big races. The (Indianapolis) 500, the Daytona 500, the 24 Hour of Daytona, the 12 Hours of Sebring, which (the team) did win as well. For me it was always something that I wanted to do, and for some reason I never had the opportunity. I've done it once with Rubens (Barrichello) in the GT class, but to win overall I had to be in a good team. Two years ago when I signed with Chip I knew I had an opportunity that was the first question I asked, "Can I do the 24 Hours?' Watching Dixon, Dario (Franchitti), (Juan Pablo) Montoya, those guys all those years winning this race, especially getting a watch. It's been a great journey. This team, we have a lot of fun and we support each other. We felt a lot pressure to win, but we knew we could do it. It means a lot. It's one more to the resume for sure."

"Yeah, it's awesome. I'm so proud. There's a lot of pressure to do my part and this team just gave us a car that was a dream to drive. We started off struggling a bit I think. The key was Friday in final practice. We really got the car dialed in and it was just so consistent through the whole race and was really, really good. I couldn't wish for better teammates and a better team to race for. It's just unbelievable, I mean this team, they have worked so hard. It's such a hard fought race from start to finish. I can't believe it. I've been trying to do this for the last 10 years and it's just surreal. It was so much fun; the car was amazing, very deserving team, very happy."

"I guess for us, really when the sun got up it started to get harder and harder. We were halfway there when the night was there and it got really cold, the groove was a little better for us and we could challenge a little bit. We knew we were lacking grip and that's been the story of the week, and even at the Roar. Really there wasn't much going on, I was in for the last full stints and just did the best I could, but I wasn't too hopeful that I could give a shot to the No. 10 or the No. 02 because they were just plain quicker. I guess we're just really happy. There were mistakes made at the end and you can always hope that something is going to happen and maybe you're going to inherit the lead, but you can't be that lucky sometimes. It's kind of a surprise that we got second from the No. 10, because really that means we kind of won the race for the points because the No. 02 is not a championship car. It's a pretty good day for the team, and I'm just glad I could participate with the effort. It's always great to race with these guys."Â�

""I had a great time. The Corvette Racing team welcomed me really well. It was my first time with Team Chevy as well and it felt really nice. The Corvette C7.R is a beautiful car and very competitive. I was really impressed with the GT class and I understand why Corvette Racing is so involved with this series. It's so competitive between all the competitors and between all the manufacturers. I think it's an incredible series. Every lap, it's one-tenth here and one-tenth there, and you try to gain time on the others. When you end up, after 24 hours, on the podium here in Daytona, you've accomplished something exceptional. And furthermore, Corvette Racing accomplished two cars; and one of them won. So, congratulations to the whole team. I'm very happy to be part of this team and I look forward to Sebring already."Â�

"We were in a way better spot this year. That's why it's a heartbreaker this year because we were right there going for the lead, and then just something so simple like a clutch. The clutch went on me, that's what happened, and then I couldn't use first gear, so I only had second through sixth, and there's like three turns on the track that are first gear corners, so I was really slow and then we figured we'd bring it in and try to diagnose the problem a little bit."Ã‚Â�

(On what went wrong with the car): "I left the pits for my third stint of that outing, and right away I just knew at first I just thought it was wheel spin on cold tires, but after that I was like, "No, there's no way this is cold tires anymore.' Actually, on my street car I did the same thing on my clutch so I knew exactly what it was. I was like, "That's got to be the clutch.' So I bring it on in and I was like, "Yeah guys, the clutch is slipping.' Surely that was it. We tried to do different maps and stuff to help it out, boost maps, but ultimately I just couldn't hang with anybody and I was just too slow ,so we just had to bring it in and diagnose it."Ã‚Â�

"As everybody knows in these sorts of races, a lot of luck goes into it. Unfortunately, she wasn't on our side today. I am disappointed we couldn't be a little bit better, but the boys did a great job fixing the car and making up for the mistakes that were made, not on our part but by other guys hitting us. I am proud of our effort and hope we will be back next year to do a better job."Ã‚Â�