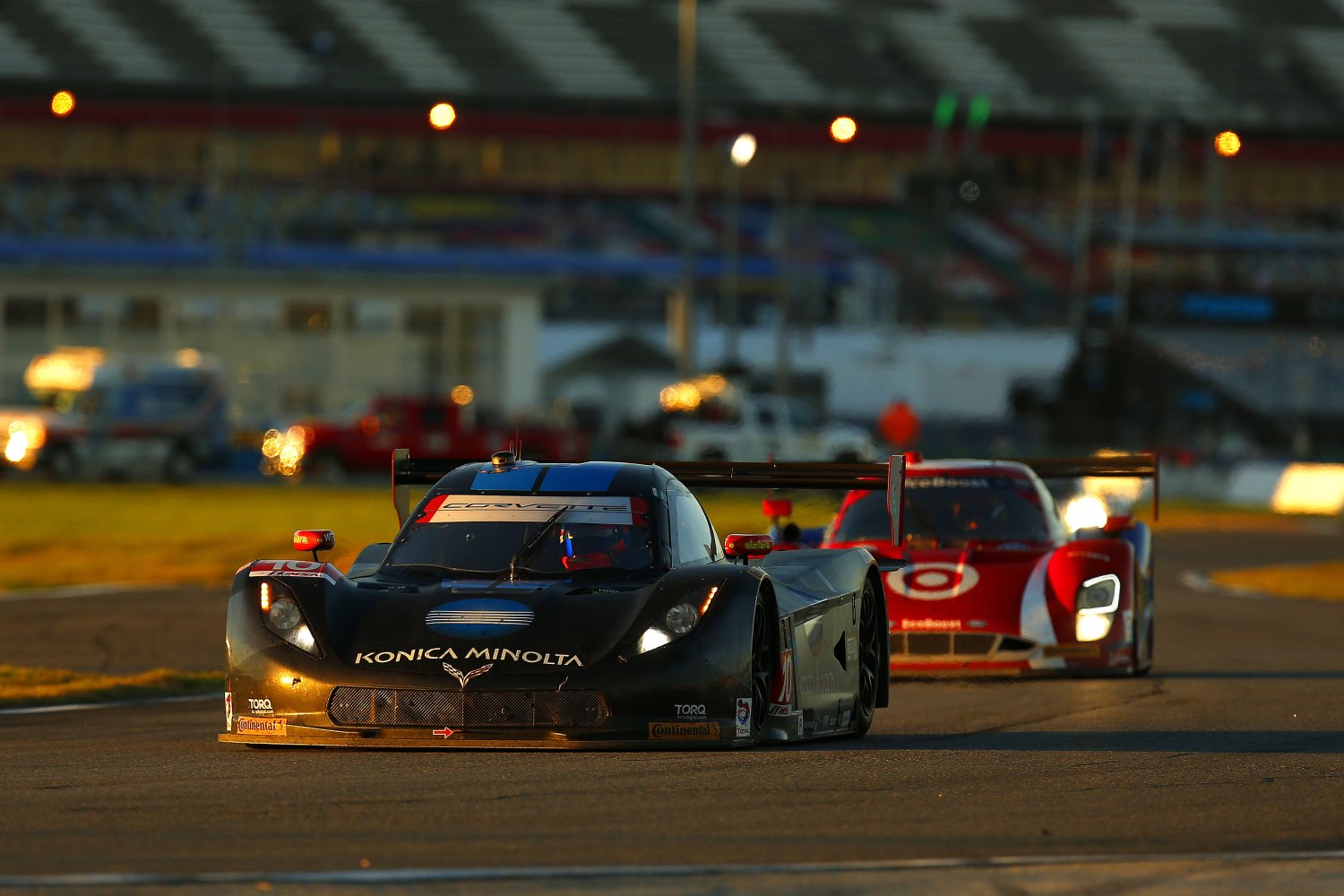 "Surreal" is not a word you'd often apply to a motorsports event, but at 2 a.m. in the infield of Daytona International Speedway, almost halfway through the Rolex 24 at Daytona, it applies.

The temperature, nearly 70 degrees at the start of the race, has dropped considerably. Smoke wafts through the air from campfires and smoldering bar-b-ques.

On the track, though, the competition is as hot as it was when the green flag fell. There has been attrition; there are cars on the track repaired under feverish and often heroic conditions, and there are drivers coping with constantly changing conditions and traffic at nearly every turn.

It's when the cream begins rising to the top, and 12 hours into the Rolex 24, the leaderboard is a testament to teams that have preparation, talent and more than a little luck so far.

In the Prototype class, Jordan Taylor, driving for his father Wayne Taylor in the No. 10 Wayne Taylor Racing Chevrolet Corvette DP, leads overall, with NASCAR star Kyle Larson less than five seconds back in the No. 02 Chip Ganassi with Felix Sabates Racing Ford EcoBoost-powered Riley. Both drivers are cranking out laps in the 1 minute, 39.8-second range, which is close to the pole speed in qualifying.

In the Prototype Challenge class at the 12-hour mark, Jon Bennett in the CORE autosport No. 54 has a one-lap advantage over second place. In GT Le Mans, the two factory-backed Chevrolet Corvette C7.R teammates are leading the class, 25 seconds apart. And in GT Daytona, Jeff Segal has his No. 63 Ferrari 458 Italia 35 seconds ahead of the pursuing No. 48 Audi R8 LMS.

Quite a few of the 53 entries have already packed up, including the DeltaWing, which suffered clutch woes and will be scored 53rd, despite turning some very fast laps early in the race. The No. 2 Extreme Speed Honda-powered Prototype will be scored 52nd after a powertrain failure. An oiling issue sidelined one of the Mazda Prototypes, which is presently scored 48th.

Walk down pit lane, and you'll see snoozing crewmen wrapped in blankets, trying to get a little rest. With 12 more hours of racing left, they'll need it.

Jordan Taylor drove the No. 10 Konica Minolta Corvette DP to the lead at the halfway mark of the 53rd Rolex 24 At Daytona, but it was the pair of Chip Ganassi Racing with Felix Sabates Ford EcoBoost/Riley entries that shared the lead in the Tequila Patron North American Endurance Cup after two six-hour segments.

After scoring a maximum five points in the opening segment, the No. 01 entry driven by Scott Pruett, Joey Hand, Charlie Kimball and Sage Karam finished the second segment in the third position while the team's No. 02 entry driven by Jamie McMurray, Kyle Larson, Tony Kanaan and Scott Dixon was second at the end of each segment.

Points in the four-race Patron Endurance Cup are awarded at specific intervals throughout each race – every six hours in the Rolex 24 – with the leader at the end of each segment scoring five points, four points for second, three points for third and fourth-place on back receiving two points.

Similar to Chip Ganassi Racing in the Prototype class, Corvette Racing's pair of Corvette C7.Rs shared the top spot after two Patron Endurance Cup segments in the GT Le Mans (GTLM) class. Oliver Gavin led at the 12-hour mark in the team's No. 4 entry co-driven by Tommy Milner and Simon Pagenaud while the No. 3 driven by Jan Magnussen, Antonio Garcia and Ryan Briscoe finished the segment second.

CORE autosport continued to show the dominance in Prototype Challenge (PC) that guided the team to wins in three of the four Patron Endurance Cup events one year ago. After Colin Braun pitted in the seventh hour with a flat left-rear tire, he later drove the No. 54 ORECA FLM09 he shares with co-drivers Jon Bennett, James Gue and Mark Wilkins back to the lead earning the maximum 10 points through the race's first two segments.

Roles were reversed in the GT Daytona (GTD) class as the No. 63 Scuderia Corsa Ferrari 458 of Bill Sweedler, Townsend Bell, Jeff Segal and Anthony Lazzaro avenged a late pass by the No. 93 Riley Motorsports Dodge Viper SRT GT3-R driven by Kuno Wittmer, Cameron Lawrence, Dominik Farnbacher and Al Carter at the end of the first segment. With the two teams swapping positions in the opening two segments, both share the class lead with nine points apiece.

Broadcast coverage of the 2015 Rolex 24 at Daytona continues until 7 a.m. ET, it will be broadcast live on IMSA.com, before returning to FOX Sports 1 Sunday morning at 7 a.m. FOX Sports 1 coverage will continue for the remainder of the race, concluding at 2:30 p.m.

Defending Rolex 24 champion Action Express Racing ran into trouble shortly before the nine-hour mark when Joao Barbosa stopped on-track with no fuel pressure in the No. 5 Mustang Sampling Corvette DP. The car required a tow to the garage and returned to the track three laps down. At the end of the second segment, co-driver Christian Fittipaldi had moved to sixth, two laps down.

Another Prototype contender ran into trouble early in the second PatrÂ¢n Endurance Cup segment when Tony Kanaan drove the No. 02 Chip Ganassi Racing Ford EcoBoost/Riley to the garage for a splitter change. The team was able to make the repair under a yellow flag losing only one lap. Kanaan then got the car back onto the lead lap and Kyle Larson drove to the second spot at the end of the 12-hour mark.

Leading into the 10th hour in the GTLM class, Pierre Kaffer pitted the No. 62 Risi Competizione Ferrari F458 Italia with a loss of horsepower. After multiple pit stops to diagnose the issue, Kaffer drove to the garage for repairs and the team later retired from the race reporting an electrical misfire.

A multi-car incident involving the two Porsche North America Porsche 911 RSRs brought out the yellow flag in the 11th hour of the race. Both cars were running in the top five at the time of the collision, but sent the No. 912 of Earl Bamber to pit road and the No. 911 of Marc Lieb to the paddock for repairs.

Tony Kanaan, Driver – No. 02 Chip Ganassi Racing with Felix Sabates Ford EcoBoost/Riley:
"It got a lot better. It was a mistake I shouldn't have made (driving over a curb, breaking the splitter), but it happens. It put us behind for a bit, but we recovered pretty well."

Jan Magnussen, Driver – No. 3 Corvette Racing Corvette C7.R
"We're eight-and-a-half or nine hours in, and we're still battling like it's a sprint race. It's fantastic and a great feeling. You push really hard all the times and go for the gaps."

Troy Flis, Owner – No. 90 VisitFlorida.com Racing Corvette DP
"Speed wise, I think the car came to us a little bit. We made a couple changes early in the race and gave up some track position. Ricky (Richard Westbrook) and Rocky (Mike Rockenfeller) really like the car right now. We're a little down on the max speed we're looking for, but I don't think we can trim it out any more. It would be too much a handful."

Shane van Gisbergen, Driver – No. 22 WeatherTech Porsche 911 GT America
"That stint was really enjoyable; I got to lead for about an hour so. I even got to lead the field to the green flag at one point on a restart. It's pretty crazy to get out of a car after a long stint like that and still have something like 14 hours to go."