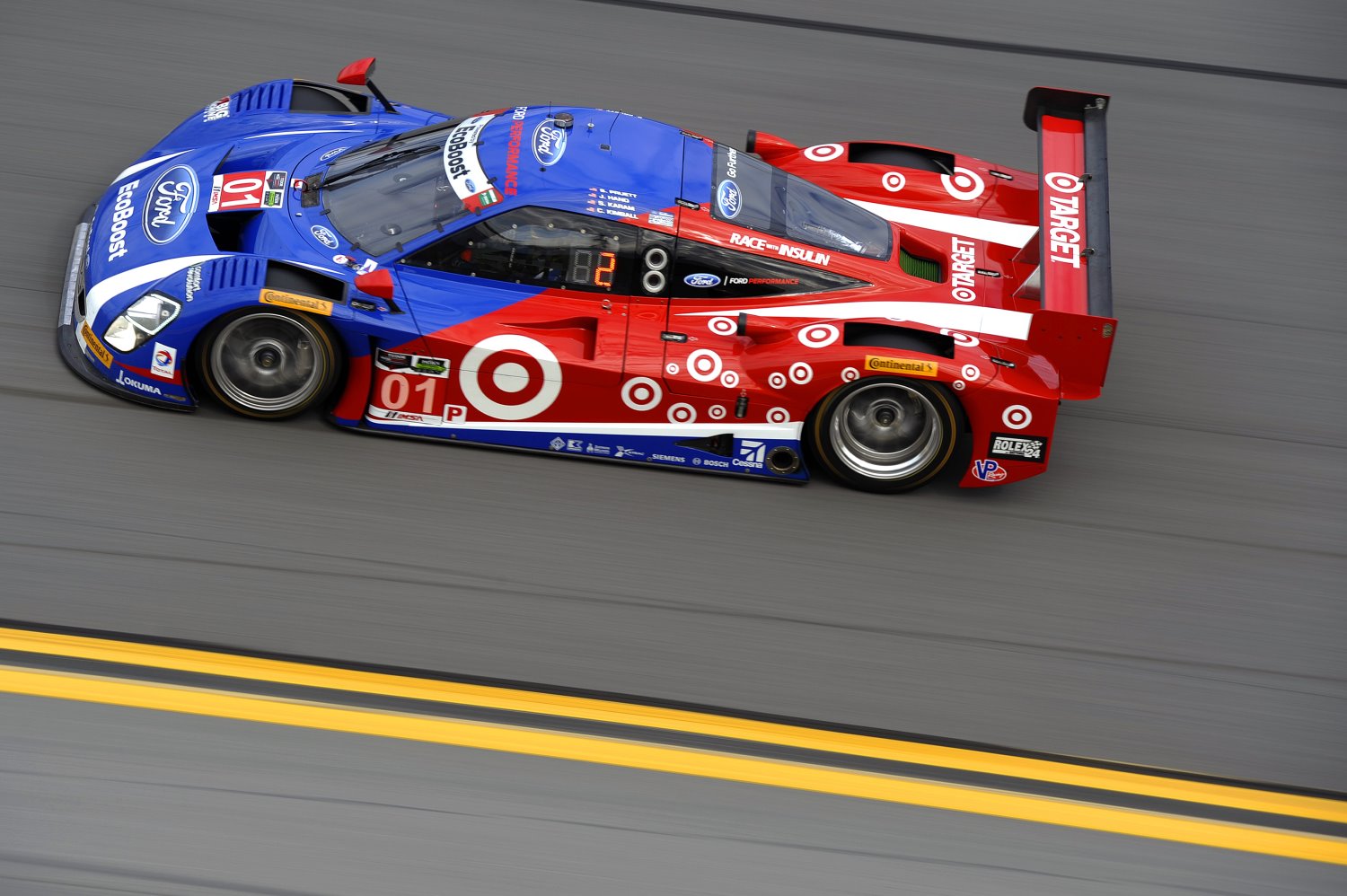 Sage Karam, in the No. 01 Chip Ganassi Racing Riley-Ford, has moved into the lead just before the four-hour mark in the 53rd Rolex 24 at Daytona.

The 19-year-old made a gutsy move on Lap 103, on the restart following the third full-course caution of the race to jump from third to first. He passed leader Jordan Taylor and Ganassi teammate Jamie McMurray in the sister CGR No. 02 Riley-Ford.

Karam pitted just shy of the four-hour mark to start the fifth round of pit stops and when they were all done he was back in the lead on lap 138.

As darkness falls four hours into the Rolex 24 At Daytona sports car endurance race, the field is maintaining a pace you would associate more with the last lap than the first 125.

Undoubtedly, "endurance" will be the ultimate key to winning the Rolex 24, as both mechanical failures and crash damage has already been a factor in reducing the 53-car field by a half-dozen entries.

"At the start of the race, you would think the best talent would be in the cars," said Scott Pruett, co-driver of the No. 01 Chip Ganassi Racing with Felix Sabates Ford EcoBoost-powered Riley Daytona Prototype. "Even though, there were some crazy antics out there."

"I am always surprised at how hard people are fighting so early on," said Jeroen Bleekemolen, after his first stint in the No. 33 GT Daytona (GTD) Dodge Viper SRT, which led its class.

To no one's surprise, though, leading the most laps so far is the No. 02 Ganassi Ford EcoBoost-powered Riley DP, an entry shared by IndyCar regulars Scott Dixon and Tony Kanaan, and NASCAR stars Jamie McMurray and Kyle Larson.

That car seemed to be the team's hare, with the No. 01 sister car, driven by Pruett, Joey Hand, Charlie Kimball and Sage Karam maintaining a slightly more conservative pace, as the No. 01 car is running for season-long points in the TUDOR United SportsCar Championship, and the No. 02 isn't. That said, Karam took the lead for the No. 01 on his stint and logged the fastest lap of the race so far – 1 minute, 40.107 seconds, less than a second off qualifying pace.

Dixon, who qualified second, took the No. 02 car past polesitter Ozz Negri on the first lap, though Negri and the rest of the No. 60 Michael Shank Racing Honda-powered Ligier JS P2 is staying close.

Also strong, as expected, is the defending race and season champion the No. 5 Action Express Racing Chevrolet Corvette DP, and the No. 10 Wayne Taylor Racing Corvette DP.

Leading overall at the four-hour mark, with the standings skewed a bit by recent pit stops, was Jordan Taylor in the Wayne Taylor Racing Corvette DP, followed by McMurray and Karam in the Ganassi cars. Eight cars, all Prototypes, remain on the lead lap, separated by less than 60 seconds.

In the Prototype Challenge (PC) class, the No. 54 CORE autosport car led after four hours. In GT Le Mans (GTLM), the No. 3 Chevrolet Corvette C7.R was ahead, and in GTD, it was the No. 63 Scuderia Corsa Ferrari 458 Italia. While there has been a fair amount of car-to-car contact and three full-course caution periods, there have been no serious incidents.

One of the biggest developments is that the innovative, lightweight DeltaWing Prototype, after running solidly in the top 10, pulled off the track on lap 43 with transmission issues serious enough to end its race. Other Prototypes suffering early problems were the No. 31 Whelen Chevrolet Corvette DP fielded by defending champion Action Express, as well as the No. 2 Tequila Patron Honda-powered HPD ARX-04b.

The Whelen Corvette got back on track, but multiple laps behind. Also plagued with early problems were the No. 97 BMW from defending TUDOR Championship GTD champions Turner Motorsport, and the No. 98 Aston Martin, which was a front runner early on in GTLM.

The two Mazda Prototypes are showing considerably more speed than last year, and the No. 07, driven by Tom Long, actually led briefly, becoming the first diesel-powered car and the first Mazda to lead overall in Rolex 24 history. But minutes later Long pulled the car to the pits with a drivetrain issue, and while it has returned to competition, it is seven laps down.