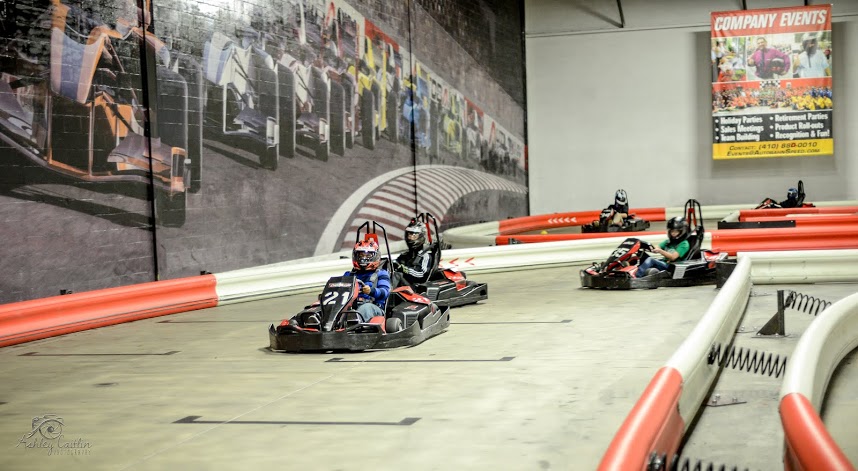 Tuesday January 20th marked the start of a groundbreaking new karting series, the Maryland High School Varsity Karting Championship! The new 'arrive and drive' series is taking place at Autobahn Indoor Speedway in Jessup, MD and showcases young talent in the sport by allowing them to represent their schools.

The format for the series consists of 2 person teams representing their school each night, with 2 qualifying races for each racer that set the grid for the evening final, which is a race for position and the race where the most points are earned each night. This format will also consist of 2 tracks with an alternating schedule week to week giving racers the challenge of adapting to a new track.

Tuesday was the first of 2 non-points paying races. Autobahn Competition Director and Racing Driver, Jordan Wallace, walked the 22 drivers representing 13 Maryland high schools through a series of lessons about overtaking, consistent laps, race lines, and situational awareness. The drivers would then take to the track.

Pole sitter Jimmy Chen of the Sandy Spring Friends School managed to hold off River Hill's Punsalan for 12 laps to take home the B-Final victory, but Punsalan put the entire field on notice that he is going to be a force to reckon with when it Race time comes, 6th to 2nd in two laps might be one of the best drives we have seen in league racing history here at Autobahn Indoor Speedway.

The A-Final was the final race of the evening for round 1 of the Maryland High School Varsity Karting Championship, with River Hill's Zack Spicer taking Pole position honors followed by Leonidas Williams from Baltimore Lab school in P2 and Jackie Ding starting P3 for the Sandy Spring Friends School. Early on, Spicer took a commanding lead while Leonidas in the P2 spot got shuffled back to 4th on the start, while Ding moved quickly into 2nd in his pursuit of Spicer whole had pulled out a considerable gap on the field. toward the back of the grid Brendan Sterns of the Jemicy School and Thomas Gunther from Wye River High School battled for the 4th position with Williams who after a rough start began finding his rhythm and made his way back up to 3rd. At the front Spicer was untouchable as he cruised to his first victory of the season for River Hill High School, while young Jackie Ding took home a strong P2 finish for the Sandy Spring Friends School and Leonidas Williams finishing 3rd for the Baltimore Lab School. It was a great first night of racing, with teams like River Hill, Sandy Spring Friends School, and Baltimore Lab School making early on track statements to their championship intentions for the first season, and teams like the Jemicy school and Bowie High getting up to speed by the end of the night showing that this championship is still anybody's to win.

The first points-paying event will be Tuesday February 3rd.