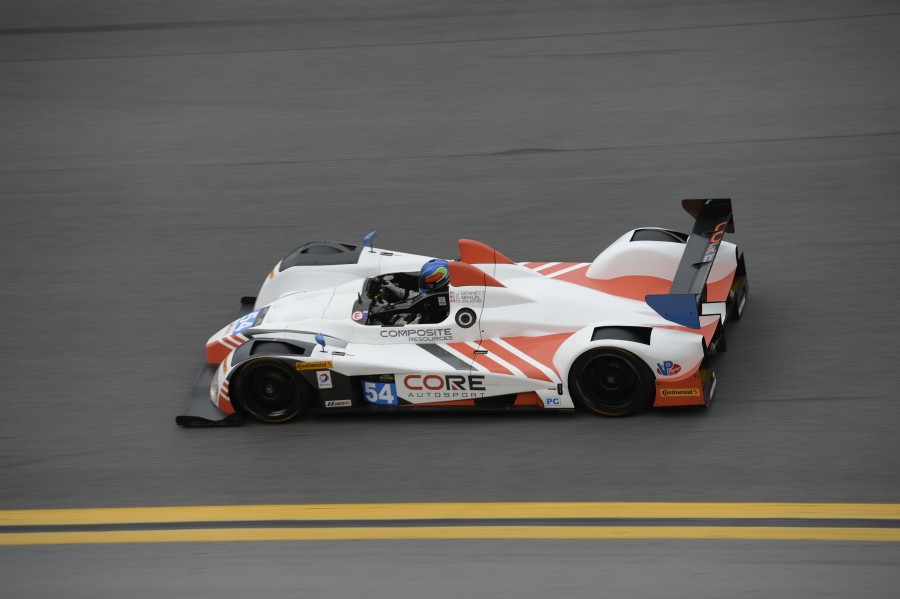 The TUDOR United SportsCar Championship will officially begin this week at Daytona International Speedway, where Round One, the grueling Rolex 24 at Daytona, will go green on Saturday, Jan. 24.

CORE autosport is the defending Prototype Challenge category race winner at Daytona. The No. 54 Composite Resources/Flex-Box ORECA FLM09 crossed the finish line one lap ahead of its nearest competitor and in ninth-place overall. It marked the start of championship season number four for CORE, who would also go on to collect the Tequila PatrÂ¢n North American Endurance Cup in the PC category.

The driver and crew lineup from last year's race-winning effort returns in 2015 to attempt a repeat. Jon Bennett, Colin Braun, James Gue and Mark Wilkins will share driving duties. At Daytona, Bennett and Braun will begin their quest to defend their 2014 PC Drivers' Championship.

"CORE autosport had a productive test at this year’s Roar Before the 24. We were impressed with the new power in our less-restricted Chevy motors. We are hoping to see regulations that improve our top speed on the oval to help separate the classes. We spent most of the Roar experimenting and not concentrating on outright lap time. Watching Colin at the top of the timesheet for several sessions was a bonus for our team.

"Starting the season with a 24-hour race can be stressful. There is a lot of effort that goes into a 24-hour race. An extremely busy December pays dividends in January (usually). Compared to last year, CORE autosport now has a successful template to work from. Last year, CORE was preparing for our first 24-hour race ever and building a full-on factory program with our partner Porsche North America.

"I am very proud to have our motorsports company recognized with the nomination for the Bob Snodgrass Award of Excellence. Every member of CORE has performed with excellence and teamwork beginning the day we opened our doors. I am thrilled with the success we have achieved together and it would be an honor to accept this prestigious award for my teammates."

"After last year, we certainly know what it takes to win. It’s nice to be doing it again with the same group of people. I think it gives you a little bit of comfort knowing that we already did it and now we just need to do it again. Being the type of organization that we are, I don’t think we get caught up in the hype or pressure. We're a group of guys that want to win everything we compete in, so I think we’re feeling the same way about it we did last year. If anything, we put the pressure on ourselves to do a good job.

"As with all these events, it's not just about 'saving the race car.' Obviously, we’ve got to be smart and make good decisions in traffic, but by no means are we pacing ourselves or taking it easy or driving at 95 percent. We're going as hard as we can the whole event. Goal number one is to get to the end of the race, but other than that it's a full on sprint race.

"I think my favorite time to drive is the middle of the night. There's not as much going on, traffic's thinned out and everyone's just doing their thing. For the most part everyone is making smart choices. It’s a lot of fun because it has a good rhythm and flow to it.

"With IMSA's rule package we have a very unique rule set compared to what a lot of the other classes have. It is tremendously difficult to pass the GTLM cars with their straight-line speed, but also frustrating to deal with the GTD cars because we are so much faster than them, but we can’t pass them on the banking at all. It's a little bit of a head scratcher. It's going to make for a long event, but that’s something that will be the same for everybody."

"The Roar test was very productive; everything went to plan and we were able to accomplish everything on our list. We even were able to do a little bit of running in the rain. All in all, I was very happy with the test and it felt like we just picked up where we left off last year. As usual (engineer) Tom [Brown], (crew chief) Eric [Van Bibber] and all the guys at the shop gave us a great car.

"I think the hardest part of the 24-hour race is the mental aspect and being able to adapt very quickly to changing conditions like the weather, car problems, fatigue etc. It is hard to get yourself to shut down and get rest in between stints, but it's essential that you do otherwise you'll be worn out before you get to the end.

"I think you'll find most drivers enjoy driving at night; I find that the most enjoyable time. There is something about night time driving that gives you a different level of focus; all the lighting at Daytona blocks out a lot of the visual distractions you would see in the day time. The other time of race that is a favorite of mine is when the sun rises on Sunday morning, as it comes up it re-energizes everyone and it's a reminder that the finish is near.

"The key to winning the race is a combination of many things but it usually comes down to preparation and sticking to your plan. Speed is important, but when you look back at the history of the race it is usually won by being consistent, smart in traffic, staying out of trouble and the team's ability to deal with adversity. Every team will face unforeseen challenges during the race, and many times success hinges on how well you deal with it. I think one of the keys to CORE's success over the years is how well prepared and organized they are."

"The Roar test went very well. The car ran flawlessly and the pace was spot on. The balance of the car is where we want it to be for a 24-hour race and I think we are well positioned for the race.

"I think the real take away from last year’s race is how we achieved the result. We collectively focused on execution, kept the car out of trouble and ran a strong but smart pace. I think we will utilize a similar mindset going into this year's Rolex 24.

"I'd say the toughest part of a 24-hour race is the moment you wake up after a short sleep, in the middle of the night, exhausted and you have to prepare to go flat out. The mind and body say sleep and you have to push through that and get focused. This is certainly one of the most grueling aspects.

"So many factors are involved in winning the Rolex 24. I'd say the key factor is the people. Without a great team, it’s certainly a hard one to win. Everyone at CORE is outstanding at what they do and they have every detail covered. It’s the little things that make the difference."