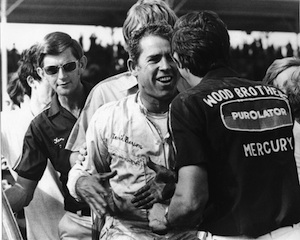 Wood Brothers Racing has become something of a common face in NASCAR. Their consistent attendance year in and year out has possibly gone unnoticed to some, so one member of the family has set out to make sure the team's founding fathers get the recognition they finally deserve for their unwavering show of perseverance. Jon Wood, third-generation family member and former Wood Brothers Racing driver, grew up with a fascination for a very peculiar book. That book came to his elementary school once a year when the bookmobile would roll into town. The one book that was so captivating was the Guinness Book of World Records.

"From the beginning I have been fascinated with the Guinness Book of World Records," said Wood. "I remember thinking that one day I would figure out a way to do something worthy of being in the Book. I think that's just part of a child's fairytale-like thought process." His family's race team, founded in 1950 by his grandfather Glen Wood, is generally considered NASCAR's longest active race team.

The Woods have fielded cars every year since 1950, and while other established teams have come and gone, the Woods have maintained the same ownership through the present. That fact; however, has never been officially recognized, and Wood wanted to do something about that. He got on the Guinness World Records website and submitted an application for a record claim.

"Very quickly I got a response from their sports records coordinator, and he was highly interested in helping with this claim," Wood said. The next step was finding a way to substantiate the record. For that he turned to Buz McKim, Historian at the NASCAR Hall of Fame in Charlotte, N.C. McKim quickly verified the Woods' record, and as they say, the rest is history.

For Jon, getting his family's accomplishment documented in the Guinness Book of World Records makes the record that much more meaningful. Getting this documented and on paper brings feelings of accomplishment that is shared by members of three generations of Woods, each of whom has played a role in the team's longevity.