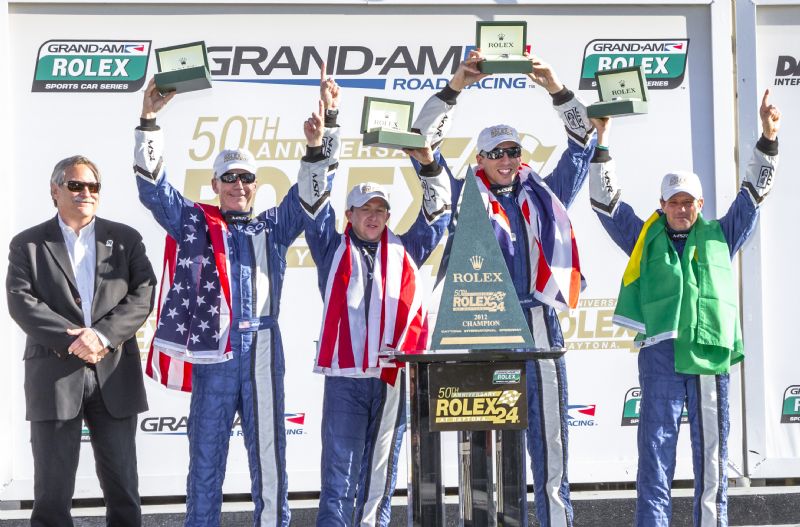 Pataskala, Ohio (19 January 2015) – For Michael Shank Racing with Curb/Agajanian, the work has not stopped since the checkered flag dropped on the 2014 IMSA TUDOR United SportsCar Championship at Road Atlanta last October. It has been perhaps the busiest off season to date for the Ohio-based organization, which took on a big challenge when the team switched to a Honda-powered Ligier JS P2 car for the 2015 season.

As the group travels to Daytona International Speedway this weekend for the 53rd running of the Rolex 24 At Daytona, the team is eager to see the fruits of its labors in action as Michael Shank Racing with Curb/Agajanian debuts the No. 60 Ligier JS P2 in the classic 24-hour endurance event. Longtime Michael Shank Racing drivers John Pew, Ozz Negri, and AJ Allmendinger are joined by 17-year-old Matt McMurry, who will become the youngest prototype driver in Rolex 24 history when he straps into the No. 60 machine.

The formidable driver line-up combined with the new Honda power plant and the new Ligier JS P2 machinery has the 2012 Rolex 24 winning team hopeful of another positive outing at the famous 3.56-mile road course.

“We are all anticipating a strong showing," said Team Owner Mike Shank. “Every single person on this team has put so much effort into this new project. We are very much looking forward to seeing what we can do in the 2015. We feel like we have the opportunity to win Daytona again, but it’s very different preparing this car compared to preparing the Daytona Prototype (DP). We know what the DP did, we had it for 10 years. With this new car, we just don’t know. We just need to work on the reliability that we know works around here. The speed is there, it’s just about getting to the end of the race. We’ll do everything we can."

Michael Shank Racing with Curb/Agajanian will also announce an exciting new partner for the team on Tuesday with AERO paint providing yet another sleek livery for the No. 60 car.

“We are very, very thrilled to announce our new sponsor," added Shank. “We had a great year with commercial sales last year with the excitement around the merger, and I think this new car and new motor will only help to continue to drive that. Everybody is very excited about this new project."

The Rolex 24 at Daytona event weekend kicks off on Thursday with practice and qualifying. Friday will feature just one practice session ahead of Saturday’s Rolex 24 green flag at 2:10 PM ET. You won’t miss a moment of the Rolex 24 At Daytona with FOX, FOX Sports 1 and FOX Sports 2 each carrying different segments of the race. IMSA.com will provide LIVE coverage and commentary through the overnight hours from 10:00 PM ET – 7:00 AM ET.

IMSA Radio will also provide full 24-hour coverage of the event. Follow @MichaelShankRac on Twitter for in-race updates from the team.

DRIVER COMMENTS:
John Pew: “I’m really looking forward to the Rolex 24. It is my ninth 24, and I’ve never been more excited about this race. We have a whole new challenge with the Ligier Honda-powered LMP2 car. It’s a great change and we are really excited about it. Driving-wise and engineering-wise, it’s a new challenge for me and for the whole team, but we are up to it. If we keep our nose clean I think we can do really well. With the 24, you really never know what is going to happen until the last few hours and you just have to be there to at the end to compete. For me as a driver I am really excited about this new challenge."

Ozz Negri: “We expect to win. I think we have the package to win. It is always tough when you are in this situation because you put more pressure on yourself, but I like that. There is always something you can make better and we are always looking to make improvements. We are going to be talking a lot with the team and with Dale (Wise), the engineer, from now until the race to keep getting better. But I am really looking forward to it. It has been a refreshing start to the year and a boost of positive energy."

AJ Allmendinger: “I think there are a lot of mixed emotions heading into the 24 this year. Excitement is definitely one of the best, I think everyone really liked the car and it had pretty good speed in it from the start. So if you just base it off of raw speed and pure enjoyment of driving the car, I think we are all looking forward to going out there for 24 hours. I think we have a good shot at winning the race, but at the same time there are a lot unknowns, the biggest being that we have never run this car for a full 24-hours before. When you are here testing you can see little things crop up that could come back to bite you, but you just don't know. Overall I think for a car that was pretty much built two weeks ago and finished throughout the five days of testing (two days at PBIR and three days at the Roar), I think it has done great. There haven’t been any major issues. Overall it is going to be a fun challenge and it is going to be interesting to see how these cars run against the Daytona Prototypes, but I am really looking forward to it."

Matt McMurry: “I think we have a really solid team, everyone is putting down really good lap times. I really try not to think about being the youngest driver in the race, I just keep doing what I always do and treat it like any other race and do the best I can. I’m really excited to be doing another 24-hour race, this time at home in the United States at Daytona. Le Mans was really fun and I think this is going to be just as much fun, if not even more. There is definitely going to be a lot more traffic here than there was at Le Mans and I am in a new car and that is always fun. The car has been a lot of fun to drive in testing so far, so I am looking forward to the race."

Based in Columbus, Ohio, Michael Shank Racing was formed in 1989 when Mike Shank first began driving racing cars professionally. Shank retired from the cockpit in 1997 to focus his efforts on running the team, which quickly found success in the Champ Car Toyota Atlantic Championship. With several race wins under his belt, Shank was named as Team Owner of the Year twice in four years. Michael Shank Racing joined the Rolex Sports Car Series in 2004 as the team proved as quick in endurance racing as in the sprint formula car format. Michael Shank Racing scored a debut Rolex Series win in 2006 at Miller Motorsports Park, and fans selected the victory as the 2007 Rolex “Moment of the Year." After opening the 2008 season with a front-row sweep of the Rolex 24 At Daytona, the team closed out the year taking wins in the final two races of the year.

The team scored a dramatic victory in the 50th Anniversary Rolex 24 At Daytona in 2012, and backed that race-winning effort up with a run to third place with the second team entry.