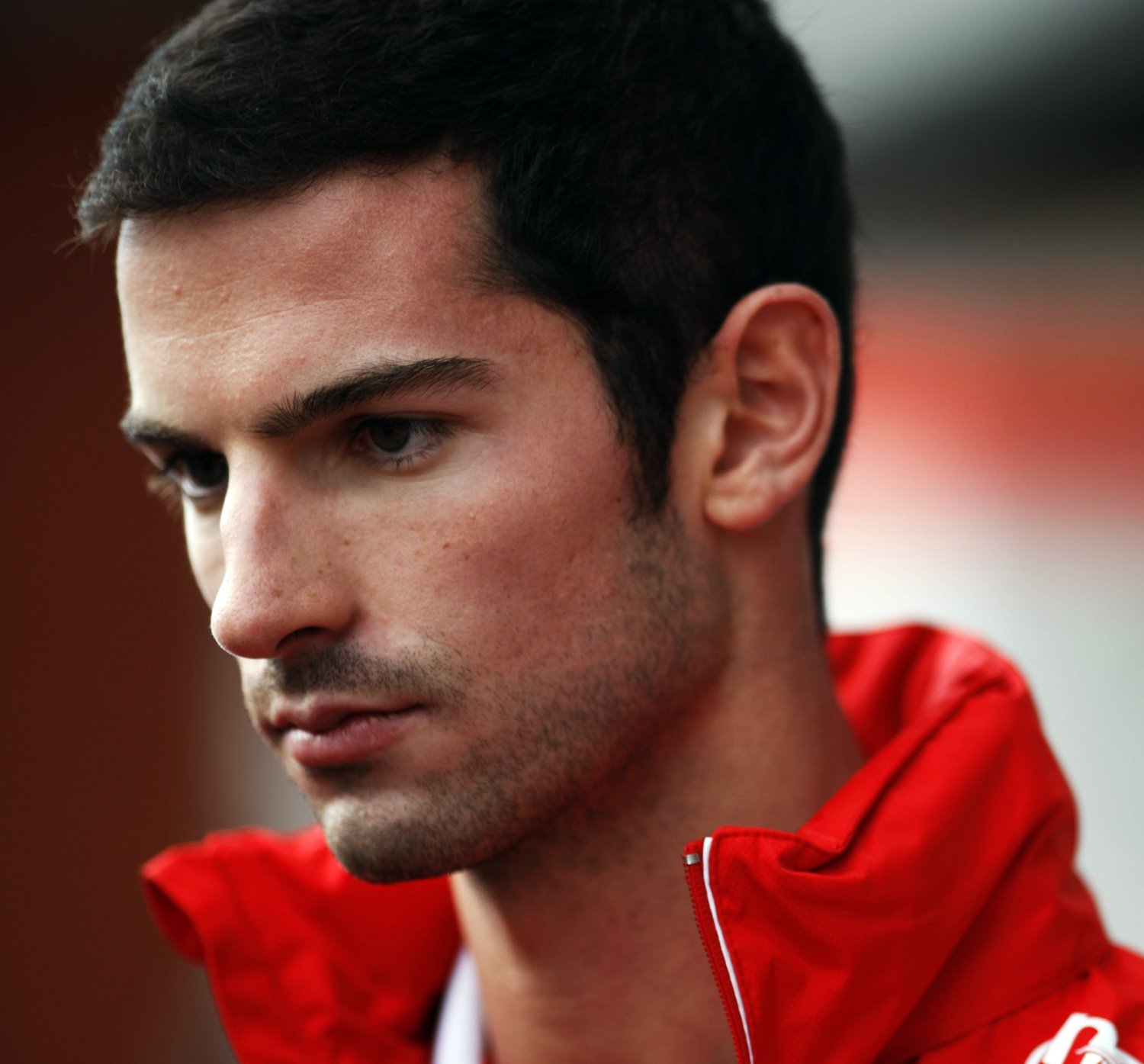 Rossi 'interested' in 2016 Haas debut
(GMM) Alexander Rossi has admitted he is "really interested" in becoming the first American driver to race a Haas car in formula one.

Although Californian, the 23-year-old has risen through the European racing ranks over the past six years, including in Formula BMW, the Renault world series and finally GP2.

This year, he came tantalizingly close to his elusive F1 race debut, initially with a role at Caterham and then at Marussia where he almost replaced Max Chilton amid the British driver's sponsorship problems.

But he admitted last month that he has now returned to his native US to "concentrate my efforts on IndyCar".

Rossi, however, has now told f1web.it: "In fact, I am analyzing different options.

"In the long term I plan to be in formula one, but having worked for two years as a test driver, in 2015 I want to race."

"As you know, in formula one there is always very few places available, but now even less due to the collapse of the small teams," he said.

"I have the necessary knowledge, the experience, I understand formula one and I think for the promotion of the series in America they want a driver from the US."

FIA to be flexible with new super license system
(GMM) F1's governing body has suggested its tough new criteria for the awarding of super licenses in 2016 may actually be flexible.

The FIA clamped down on the 2016 qualifying criteria for obtaining F1's mandatory credential due to the controversial debut this year of 17-year-old Max Verstappen.

But when the strict new criteria was outlined recently, it became clear that champions like Jenson Button and Kimi Raikkonen would not have been granted their grand prix debuts due to a lack of experience.

A driver like Williams tester Susie Wolff would also be excluded, and even the great Michael Schumacher's 2010 return for Mercedes would have been thwarted due to his lack of F1 experience in the three previous years.

But according to a report in Italy's La Gazzetta dello Sport, the FIA has now "admitted that despite the more stringent rules, possible exceptions will be granted".

The Paris federation reportedly singled out Schumacher's return as one obvious exception that would be theoretically presented to the World Motor Sport Council for "consideration" under the new rules.

It is believed Renault has also complained to the FIA that its top open-wheeler category, Formula Renault 3.5, has not been granted the status it deserves under the 2016 F1 super license points system.

So, too, has the European open-wheeler series Auto GP, according to Russia's Championat.

"We deserve to be there," promoter Enzo Coloni is quoted as saying.

"We have powerful cars, similar to the Renault world series, so it would be fair to include us in the super license points system.

"We have requested a clarification of the situation," he added, "with the support of the Italian federation of motor racing."

Bernie Ecclestone has announced that, amid the Nurburgring's ownership uncertainties, its return to the calendar this year is now off.

The F1 supremo is now negotiating with Hockenheim to take the place on this year's schedule.

"We have a contract with Mr. Ecclestone for the race in 2016 and 2018," a Hockenheim spokesman told the Kolner Express, "but at the moment there is nothing for this year.

"If there is a specific offer, we will look at it," he added.

And Hockenheim track boss Georg Seiler told Germany's Sport Bild: "Already since the race last year there were talks, but we agreed confidentiality.

"If all the parameters fit, I see the opportunities at 100 per cent that formula one can be at the Hockenheim again this year," he added.

The Nurburgring, on the other hand, is also not officially confirming Ecclestone's comments about the 2015 race being definitely off.

"We note what Mr. Ecclestone said," a spokesman for the track operator Capricorn told SID news agency, "but we do not comment.

"We would be delighted if this year there was a formula one race again at the Nurburgring," he added, "but it also must be affordable for the operator."

Pirelli open to 70s-style wide tires for F1
(GMM) Pirelli is open to supplying bigger tires to help spice up formula one.

A report by Italy's Autosprint said it is often argued that the sport would be more exciting for spectators if the cars were equipped with big 70s-style rear tires.

The change could be part of a major revamp for the 2017 season, with Bernie Ecclestone also pushing hard for the V6s of today to be replaced by loud, 1000 horse power engines.

Regarding the possibility of wider rear tires, meanwhile, Pirelli's Paul Hembery said: "We had had talks with (the FIA's) Charlie (Whiting) as we have always been open to meeting the needs of the sport.

"We just need a little notice," he is quoted as saying.

"It will be very difficult to completely redesign the tire for 2016, so it is more realistic to think about 2017.

"This is also a logical consequence of our contractual terms, as our deal will expire at the end of 2016," Hembery added.

Malaysia has been under consistent pressure in recent years from Bernie Ecclestone to switch to a floodlit format, to emulate the Singapore-like spectacle and provide a better television timeslot for the global audience.

"In the past he was pushing," Sepang chief Razlan Razali admitted to Reuters, "but now I think it's the first time where he actually listened to us as a promoter (about) what we want."

What will probably change for Malaysia in 2015, however, is a race time change from 4 to 3pm, as a consequence of Jules Bianchi's horror crash in fading light at Suzuka last year.

"For us it's good," Razali said. "It's a safer time bracket. So now people can come in for lunch, watch the race and about five o'clock they can go back (home)."

Another race slated to shift to a night format for 2015 was Russia, after the Sochi event debuted last year at 3pm.

But race organizers have in fact confirmed that this year's edition will kick off an hour earlier than in 2014, at 2pm local.

"Many fans of motor sport already arrange their trip for the Russian race," promoter Sergey Vorobyov told local media, "so for them it is a good opportunity already to plan the weekend."

Malaysia now happy with quieter F1
(GMM) Race organizers in Malaysia are getting used to the milder tones of today's F1.

A year ago, Sepang was counted among scores of F1 circuit chiefs who joined Bernie Ecclestone in railing against the loss of the sport's iconic screams of normally-aspirated power.

Boss Razlan Razali told Reuters that when he first heard the turbo V6 power units in 2014, "I didn't like it".

"It was simply too quiet but what I noticed in the grandstands is that you get families with kids watching and enjoying F1 more.

"I think it attracts a new fan base now. And that's what you want," he added.

The famous British team raced throughout 2014 without a title backer, following the withdrawal of Vodafone.

But the return to Woking of Fernando Alonso, to spearhead the team's new works Honda era, fired rumors the Spanish telecommunications brands Movistar or Telefonica could headline at McLaren in 2015.

A Telefonica spokesman is quoted by El Mundo Deportivo: "Telefonica will not sponsor a F1 team."

The spokesman said the mobile network operator, having backed Alonso's second world championship at Renault in 2006, is now happy "with our current sponsorship portfolio".

After three years at Red Bull's junior F1 team Toro Rosso, the 24-year-old was dropped but he has kept his dream alive with a simulator role at the sport's fabled team, Ferrari.

"I still have a future in formula one," the Frenchman, who has already started work at Maranello, told Auto Hebdo.

"This year I will obtain an interesting technical expertise, which is of course different to what I learned at the wheel of the grands prix.

"I do not want to talk about 2016 and the possibility of taking the place of a main driver again, because now my goal is to make a modest contribution to helping Ferrari to succeed again," he said.

Vergne is also keeping his racing instincts sharp in Formula E, and he is not ruling out also entering the increasingly popular and influential world endurance championship.

"Endurance is an interesting championship," he said. "The LMP1 class is not far from formula one and racing on the track of course will not hurt me.

"Let's just say that there are options in LMP1 and the opportunity to continue in Formula E," said Vergne.

He said he is enjoying Formula E, even though the all-electric cars are not on the same performance level as the Toro Rossos he is now accustomed to.

"It is quite heavy," he said of the Formula E car, "but this is just the first year so I think the car will be actively developed in the near future.

"You need to be working in particular to save energy, but on the whole the situation in the cockpit is much less than in formula one," admitted Vergne.

"It is very different, but it is still a car with four wheels and a steering wheel, which is the most important thing.

"For three years I had a car that would not let me fight even for the top ten in qualifying, even if I drove the perfect lap. Not to mention that in 2014 I was 10 kilograms heavier than the minimum weight.

"I must admit that I was pleased to get back at the wheel of a car that is no different from the rest and possible to fight for the top positions," added Vergne.

Officials at Sochi Autodrom had indicated last year that the Russian Grand Prix could be held as a night race, but have instead confirmed that the 2015 running will begin at 14:00 local time.

"We will have an opportunity to watch the fascinating Formula 1 race one day and one hour earlier than we did last year," he added, referring to its October 11 date.

The move comes after the FIA investigation into Jules Bianchi's accident at last year's Japanese Grand Prix recommended that races should start with a four hour window prior to sunset.

Organizers of the Malaysian Grand Prix have said that they would be in favor of moving their race earlier in the day, while officials from the Australian Grand Prix confirmed that the opening round of the year, which takes place in Melbourne's Albert Park, will begin as usual at 17:00 local time.