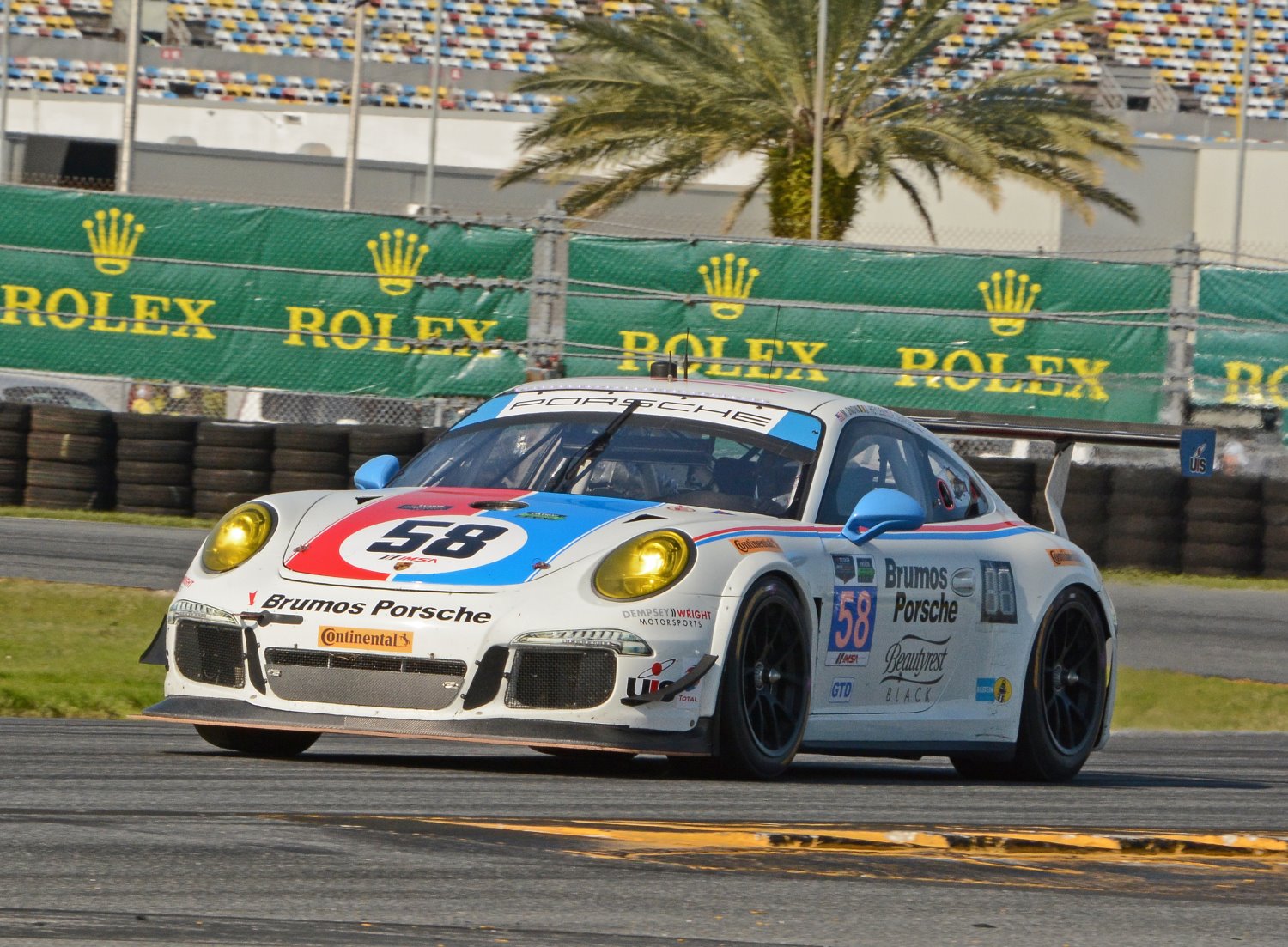 Hopes are high for an excellent performance at the Rolex 24 for Dempsey/Wright Motorsports after the team got a great deal accomplished at the Roar Before the Rolex 24 test last weekend at Daytona International Speedway in Daytona Beach, Fla. The Batavia, Ohio-based team's hard work was reflected on the timing sheets generated at the test, as the team posted the third-fastest time overall for its class.

The #58 was a success artistically too, as the many fans on hand enjoyed seeing the famous red and blue Brumos Racing livery on the team's Porsche 911 GT America. Brumos Racing is a marketing partner of Dempsey/Wright Motorsports. Other marketing partners for the team for the Rolex 24 on Jan. 24-25 at Daytona include, in alphabetical order, Beautyrest mattresses, Bilstein shocks, Spyder active sportswear and Universal Industrial Sales.

The honor of representing a team with the rich heritage of Brumos Racing was not lost on Dempsey/Wright Motorsports' four Rolex 24 drivers: Madison Snow of Lehi, Utah; Jan Heylen of Tampa, Fla.; Patrick Dempsey of Malibu, Calif. and Philipp Eng of Stuttgart, Germany.

"The thing that stands out for this race for me is being able to drive a Brumos Porsche," said Snow, who turned 19 the day after Christmas. "I have seen that livery on the track on many different cars, mostly when I watch old footage of races when I was a kid and even before I was born. There is so much heritage and prestige that comes with the Brumos name, and I am sure I can't fully comprehend how much history the team has in endurance sports car racing.

"It was very noticeable at the test though, with how many more fans we had around out trailer, although I'm sure some of that can be attributed to Dempsey!" Snow added with a smile. "But there were so many people out there in old Brumos jackets and hats, and we are lucky to have many of them helping us out for the race as well as the Roar."

Snow, considered one of the sport's brightest rising stars, is the only driver in the field whose father and mother have competed in the Rolex 24. Snow, Heylen and Marco Seefried combined to finish third in last year's Rolex 24 in a similar #58 Porsche prepared and serviced by Wright Motorsports.

Eng, the reigning Porsche Carrera Cup Germany champion and the newest member of Dempsey/Wright Motorsports, got his first look at Daytona at the test.

The 24-year-old native of Austria was impressed.

"Daytona was a new track for me, and I was amazed by it!" he said. "Going through the NASCAR banking for the first time was crazy!

"I enjoyed every minute of the test; working with the team is awesome," Eng added. "ItÂ´s great to see that every single person working for the team gives absolutely everything. I am really glad to have such a strong team and fast teammates on my side. We learned a lot from each other and we all got along very well. The atmosphere inside the team is really good. I canÂ´t wait until the start of the race!"

"We had a very successful test at Daytona!" said Heylen, a native of Belgium who is undertaking his fifth Rolex 24.

"The most important thing about the test is that we got there as a team and we left as a team that is even more motivated and more organized and has great team spirit," Heylen added. "John [Wright] has done an amazing job putting this group of guys together. The team was well prepared and the car ran great at the test; it was very competitive right from the start.

"To be successful in any 24-hour race you need to spend the least amount of time in pit lane as possible, take no risks, and save the car for the last four hours, when the real race starts," Heylen pointed out.

"Considering that we finished third last year and we're even better prepared this year, I think we have as good a chance as any of the top teams out there. The test shows we have a very competitive car and a very strong driver line-up.

"Everybody is very excited about the Rolex 24," Heylen concluded. "The team has gelled really well over these last couple of weeks. I believe that's our strongest card!"

The team set its fastest lap of the test during the second session on Friday with a time of 1:47.433 for the 3.56-mile road course for an average speed of 119.293 miles per hour. The Porsche was fast right off the transporter, as it topped the charts for the first practice session earlier that morning with a lap at 188.939 mph.

Despite rain hampering the final day of the three-day test, the team recorded a total of 185 laps during the Roar Before the Rolex 24.

The Rolex 24 will be covered live in its entirety through a combination of segments on FOX, FOX Sports 2, FOX Sports 1 and IMSA.com on Jan. 24-25. See IMSA.com for broadcast times and live timing and scoring.