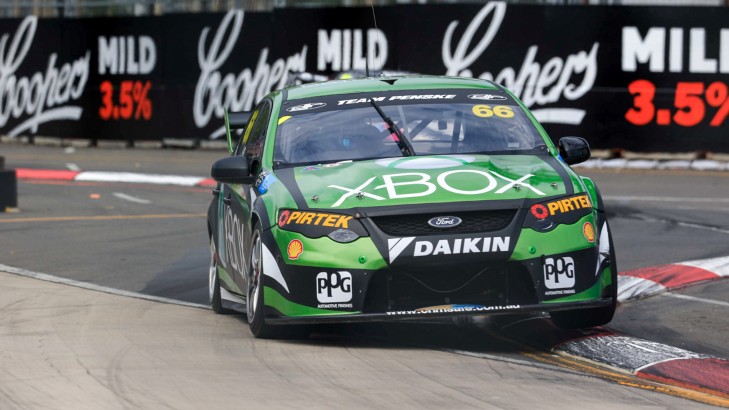 DJR Team Penske hopes to field a wildcard entry in at least one V8 Supercars event this season ahead of a full-time return to two cars in 2016.

The Queensland-based squad has scaled back to a single Ford Falcon for Marcos Ambrose this year under its new Penske guise.

DJR ran a wildcard for Ambrose at the 2014 season-ending Sydney 500 to help the nine-year NASCAR veteran reacclimatize to the Australian championship.

Team Penske president Tim Cindric says that running a second car as a wildcard at selected events is in the team's plans for this season.

"I would hope so because that would help us put the groundwork together and the basic foundation for the two-car team in 2016," Cindric told Speedcafe.com when asked of running wildcards this year.

"Certainly if all the moons align that's what we want to do.

"Whether that is with our own drivers, as in Penske's current drivers, or a combination of those from the outside (remains to be seen).

"It is something we would like to do, but it still has to make business sense."

The Supercheap Auto Bathurst 1000 and Sydney NRMA 500 are thought to be the most likely venues for an additional Penske Ford.

A Bathurst wildcard would provide the team with a chance to give at least one of its four IndyCar drivers a start in The Great Race.

Will Power, Helio Castroneves and Simon Pagenaud already have V8 Supercars experience, while Juan Pablo Montoya has previously expressed his desire to sample the Australian machines.

Ambrose is expected to be joined by former DJR full-time driver Scott Pye in the team's lead entry for the Pirtek Enduro Cup.

Cindric meanwhile admits that "it was never our plan to approach the first year as a one car team" but now believes "it could be a blessing in disguise".

"I think that we want to be ready to provide the right infrastructure to give somebody the right opportunity rather than doing it just for the sake of being two cars versus one car," he said.

"There's competitive disadvantages to doing the one-car situation but we are not looking at this as a 2015 prospect.

"This is a three-year plan as how you get to the level of being on podiums and championships and that (winning) is not going to be in 2015 (regardless of the single-car model)."

Several of the category's current stars will be off-contract at the end of 2015, leaving Penske with plenty of potential options for its second full-time seat.

"We want someone who is a proven entity, so I think we would look at all types," said Cindric of 2016 drivers

"Have we talked to any of them yet? No. We are focused right now on what we have.

"If we could have put together a deal for Scott Pye (this year) we would have," he added.

"There is nothing there that says he doesn't have the potential because I certainly think he does.

"It's just a situation to be able to do that and do that in the right way." speedcafe