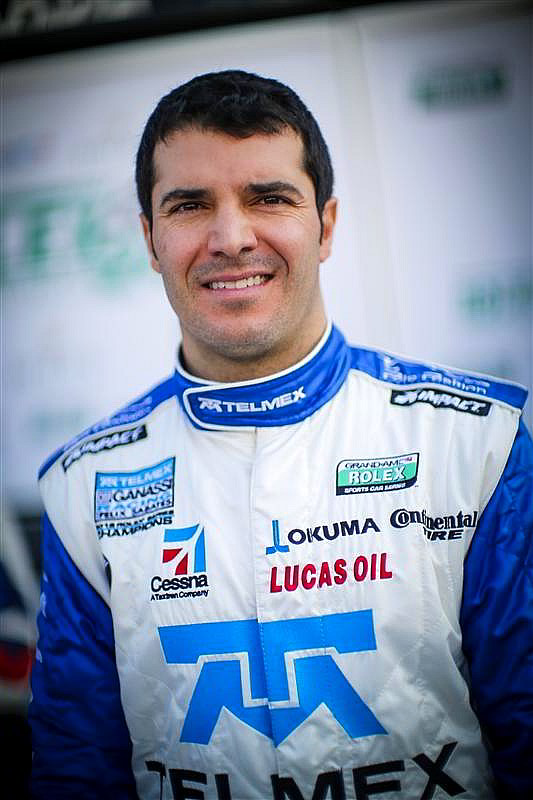 Legge joins Rojas as a full-time DeltaWing driver this season. From Surrey, England, Legge was the first woman to win a major open-wheel race in the United States (in a Formula Atlantic series race in 2005) and is the only woman to hold the overall lead in an American Le Mans Series race (in the DeltaWing roadster at Road America in 2013).

Chaves, the 2014 Indy Lights Champion, returns to the site of his first race with DeltaWing last season. With 2014 season highlights including the Freedom 100 victory at Indianapolis in May and the top spot in the recent 12 Hours of Bogata, the young Colombian-American was named Colombian Race Car Driver of the Year by that country's motorsports federation.

Meyrick, from Cheshire, England, has been with the DeltaWing team since Don Panoz took over the program in early 2013. Alongside his 2014 DeltaWing duties, Meyrick helped bring Bentley back to sports car racing by earning a second place finish in the Blancpain Endurance Series. Meyrick earned top rookie honors in the 2010 24 Hours of Le Mans.

The DeltaWing team starts the new season with momentum from their team-high fourth place finish in last year's season-ender at the 10-hour Petit Le Mans powered by Mazda. The 2015 TUDOR United SportsCar season gets underway at The Roar Before the Rolex 24 on January 9-11. The first race of the year, the Rolex 24 at Daytona – part of the Tequila Patron North American Endurance Cup – takes the green flag at 2:30pm ET on Saturday, January 25, 2015.

Memo Rojas
"I am very excited to be joining DeltaWing, for so many reasons. Tim and I have so much success together; it was a great run at Ganassi and I expect the same here. We are committed to winning and Mr. Panoz wants to do the same. I met him when I tested the front-engine car and now I get to drive one of his cars for the whole year! I was used to driving the Daytona Prototype, so having the challenge of such a unique car – and especially one that is writing the history books of motor racing – is very exciting. I have raced against the DeltaWing but it's been good to sit in the car, to get a feel for the layout. I've looked at the car up close, and seeing how the car is designed, it's a very clever car. I can't wait to drive it!"

Katherine Legge
"I'm really looking forward to being back with the DeltaWing team for 2015! We started to show some real promise at the end of the 2014 season, so the whole team is buoyed by the progress we've made – and 2015 is the year we have to make it count. If we can conquer the reliability issues we had in the past, I don't see any reason we shouldn't be leading races. Daytona is very important; we all want to win this race. Everyone at the shop has been working very hard all winter to make that a reality. There is a great deal of added pressure this year because we do have a car that can get the results. Before, this was more of a development program and I really enjoyed that role, having been here for a couple of years. It really has become my baby. I've been at all the tests except for one, working on developing the car, so I am very attached to this program. It will be an exciting year, with new sponsors and an experienced driver like Memo."

Gabby Chaves
"I had a very successful "rookie" year in endurance racing, especially since the car really was still in its developmental stages. We were competitive, the team came together well, so it was a good year. I look forward to getting 2015 underway and building on this experience, going after better results and bettering myself, in and out of the car. We've taken big steps in the right directions and worked out so many of the reliability issues, so now it's just a matter of sorting out the last bugs that every race team deals with. Memo is very experienced, it's great to have another driver onboard that knows his way around endurance racing. We're very close in regards to our speed, and very competitive, so I expect nothing less than to be challenging for the win at each race."

Andy Meyrick
"I am looking forward to getting back into the DeltaWing coupe for the Rolex 24 – we've got a great team for 2015, with the addition of Memo Rojas. The team made really strong progress in 2014 and we will be looking to build on the strong end to last season with our fourth place finish at Petit Le Mans. There were so many unknowns for us at this point last year; the first tests on the Continental tires, our first time at Daytona. This year, we have a much better idea of what to expect and we know what we have to do to finish this race. The race at Daytona really gets the season off with a rush and we're ready to get started."

Don Panoz
"I'm very happy to be working with Carlos (Slim). I think we make a great team and I'm looking forward to our relationship with Claro/TracFone as well. It's wonderful to have Memo driving the DeltaWing not only because of his experience and skills but also because Memo's first sports car test was in a Panoz car. I'm pleased we were able to strengthen an already formidable DeltaWing team, with Katherine, Gabby and Andy all returning, and I'm extremely excited about our potential as the 2015 season gets underway at Daytona."

Tim Keene
"It's exciting to have the opportunity to work with Memo again; he brings a wealth of experience to the team. I was surprised that he was available and immediately made contact with him. We have a very solid driver lineup for the season – Memo, Kat, Gabby and Andy are all very experienced drivers and are more than capable of taking this car to the front. They each push each other to be competitive. I'm really looking forward to seeing the program go to the next level and I think this is the year to show what we're really capable of doing. We're not thinking about just finishing races anymore, we're thinking about winning them."