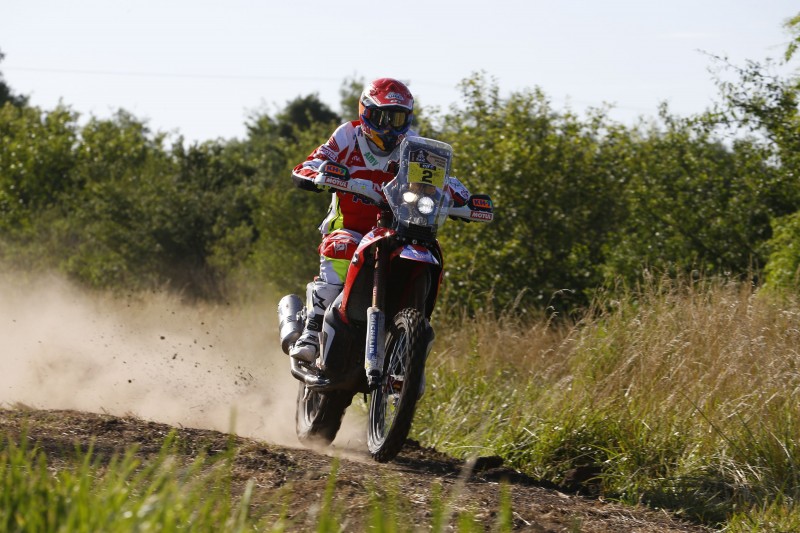 A steady fourth place on a quick first stage where there was more to lose than to win, Joan Barreda got the show on the road today during the first major special stage of the Dakar with an imposing victory. Sam Sunderland experienced disillusion by getting lost for a (very) long time 70 km from the finish. In the car race, Nasser Al Attiyah put in dazzling performance to win 8'30’’ ahead of his nearest rival. In fact, the stage wreaked havoc on plenty of levels.

Already a ten times stage winner on the Dakar, Joan Barreda has had to content himself so far with a 7th final position as his personal best, which can be qualified as a disappointment for the Spaniard who appears to be determined to do his utmost for victory in 2015. This goal is perfectly within his reach, since the Honda rider continued his collaboration with HRC with a victory on the second stage of the rally between Villa Carlos Paz and San Juan.

Battling with Marc Coma and Sam Sunderland all along the 518-km special, Barreda finally benefited from his rivals' problems at the end of the stage. Coma suffered problems with his tires and had to ease off the pace over the last 60 kilometers to make sure he reached the finish whilst yesterday’s winner got lost for up to two hours whilst trying to find the right track and can more or less kiss goodbye to his ambitions in the general standings.

Paulo Goncalves came up trumps again with another second place that allows him to consolidate his second place in the general standings, though today he did lose six minutes to Barreda. In third place, nine minutes behind, Ruben Faria achieved the performance of the day on completion of a very physically demanding stage, only two months after an operation on a broken collar bone. He beat Jordi Viladoms by four seconds, whilst debutants Toby Price and Matthias Walkner made a big impression by taking 5th and 6th place at the finishing line.

In the quad race, Rafal Sonik put in a splendid performance at the end of the stage to distance his two most serious rivals Ignacio Casale and Sergio Lafuente. The Polish rider, who finished 3'33'' ahead of yesterday’s winner, took advantage to wrestle control of the general standings from Casale, whilst Lafuente rounds off a leading trio who already dominated on the rally’s first stage.

Penalized by two minutes for speeding yesterday evening, Nasser Al-Attiyah was determined to show that he was by far and away the fastest on the tracks today during a special stage which produced significant gaps at the finish. As on the first stage, the Qatari was battling against his team-mate Orlando Terranova and won thanks to a crash by the Argentinean in the last ten kilometers, which saw him lose twenty-odd minutes.

More importantly, Nasser opened up a lead of more than eight minutes over his nearest rival in the general standings, Giniel de Villiers. A second Toyota Hilux squeezed into the day’s top 3 with the fine performance of Dutchman Bernhard Ten Brinke, who is participating in his third Dakar and now occupies an unexpected provisional third place.

Fourth in San Juan like yesterday at Villa Carlos Paz, Krzysztof Holowczyc still retains hopes of a final podium finish, whilst Carlos Sainz already lags behind the leader by 26'50'' behind the wheel of his Peugeot 2008. As for Stephane Peterhansel, he reached the bivouac with more than one hour to make up on Al-Attiyah, whilst Cyril Despres is even further behind. The day was also difficult for Robby Gordon, who suffered mechanical problems at the beginning of the special, and for the unlucky Nani Roma, who is still in the race but a long, long way from the summit of the race.

In the truck race, Eduard Nikolaev flew the flag for Kamaz after a disappointing first day, beating Byelorussian Siarhei Viazovich by 46 second. A second Kamaz completed the day’s top 3 driven by Airat Mardeev, whilst Hans Stacey grabbed a fourth place finish that allowed him to hold on to his leadership in the general standings by 20 seconds. Andrey Karginov and Gerard de Rooy, who both dominated in 2014, each lost five minutes on the day’s stage.