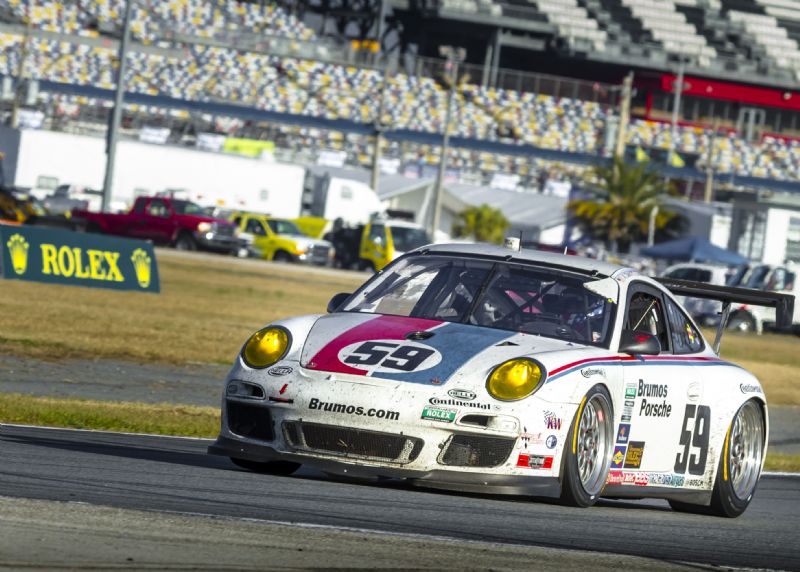 BATAVIA, Ohio, Jan. 2 — The famous Brumos Racing livery will be in competition once again at Daytona and Sebring in 2015 thanks to a joint marketing partnership announced today by Dempsey/Wright Motorsports and the Jacksonville, Fla.-based company.

Brumos Racing's famous red and blue livery will be prominently displayed on the Dempsey/Wright Motorsports No. 58 Porsche 911 GT America for the Rolex 24 At Daytona International Speedway in Daytona Beach, Fla., on Jan. 24-25 and the Mobil 1 Twelve Hours of Sebring Fueled by Fresh From Florida March 21 at Sebring International Raceway in Sebring, Fla. The endurance racing classics are the first two events in both the TUDOR United SportsCar Championship and the Tequila PatrÂ¢n North American Endurance Cup.

Brumos Racing is one of the most storied teams in the history of American sports car racing. It posted its first of four victories in the Rolex 24 at Daytona over 40 years ago, when Hurley Haywood and the late Peter Gregg were victorious in 1973 with a Porsche Carrera RSR. Most recently Brumos Racing brought home the 2011 GT championship. The team's last race was at Road Atlanta in 2013, but Brumos will once again be part of the action through the marketing agreement with Dempsey/Wright Motorsports.

In other news concerning the effort, Dempsey/Wright Motorsports also announced today that Philipp Eng will be the fourth driver for the team at Daytona. The 2014 champion of the Porsche Carrera Cup Germany joins the previously-announced driver lineup of Madison Snow, Patrick Dempsey and Jan Heylen.

Eng, 24, hails from Salzburg, Austria and currently lives in Stuttgart, Germany. He earned his first GT title in the ultra-competitive Porsche Carrera Cup Germany series by consistently good finishes, clinching the title by two points with a third-place finish in the season finale at the Hockenheimring in October. He finished the season with three victories and nine podium finishes. It was his fourth season of GT racing after previous success in formula car racing and karting. Eng joins the likes of Joerg Bergmeister, Marc Lieb and Nick Tandy as Carrera Cup Germany champions. Although this will be his first appearance in the Rolex 24, he has driven in 24-hour races at Dubai twice in the past.

"Porsche introduced me to John Wright and he gave me the chance to do my first Rolex 24 with Porsche. I really hope that it will be as successful as my 2014 season. Being part of such a great team with very fast teammates is phenomenal!

"I donÂ´t know Jan personally yet, but I know he is a very quick and experienced driver," Eng added. "I worked with Madison in the 2014 Porsche Supercup race at Austin and we got along very well. Both Jan and Madison were always on top of the timesheet at the Petit Le Mans in 2014, so I am sure we will have a good shot at the Rolex 24.

"I met Patrick at the Porsche Motorsport Night of Champions last month, and we had a good chat about Daytona," Eng continued. "It's really cool to be racing with him, and I am sure he will give everything he can to have a good result. My teammate in 2014 [in Porsche Carrera Cup Germany,] Sean Johnston, won the 2012 Porsche GT3 Cup Challenge with Wright Motorsports, and he told me it is a very professional and hard-working team!"

"Brumos Racing is pleased to partner with John Wright and his team for these two races in 2015," said Dan Davis, chairman of Brumos Automotive. "Wright Motorsports is the best-qualified team in the class, and with John's group of talented drivers, we look forward to successful racing."

"John Wright is a class act," added Haywood, vice president of Brumos Automotive. "The Rolex 24 at Daytona and the Twelve Hours of Sebring make a smart pairing with Dempsey/Wright Motorsports for Brumos, and I'm excited to be a part of it."

“The Dempsey/Wright Motorsports team is very proud to be associated with such a racing icon as Brumos Racing," said Wright Motorsports owner John Wright, who has been involved in the Rolex 24 since 1993. "A lot of preparation has been accomplished in the off-season, and this late marketing partnership was just the shot in the arm we all needed to give us the momentum it takes going into such a large venue.

"The first time I was part of a Brumos effort was in 1995 [ROHR/Brumos 993 GT2], which Hurley Haywood drove. Bob Snodgrass, Jim Bailie and the core Brumos organization showed me how a professional team operated, and it was a monumental experience for me.

"In 2012 we came together again and it was such a great experience working with Dan Davis, Hurley Haywood and Skip Schinsing that we wished we could continue the remainder of the year," Wright added. "We ran against each other in 2013, and Brumos didn't compete during the 2014 season. I for one am very glad to have Brumos in action again, and I'm honored that it's with our team."

"It is great to see Brumos back on the track," said Dempsey, of Malibu, Calif. “Brumos Porsches have been on numerous podiums over the decades, which is really inspiring to me. I’m proud to be a part of this iconic team. It is steeped in great history, and I think to be a part of that raises the game of everyone on the team."

"This year is shaping up to be a great year," said Snow, a rising star from Lehi, Utah and the only driver in the Rolex 24 who can say that both his mother and father have competed in this race in the past. "You always wonder how it will turn out in the off-season and you never really know until the Daytona test, but it sounds like this will be the best year to date for me being able to drive with Brumos. It's such a highly-respected team and it has the legacy where you see pictures and posters of its cars everywhere.

"I met Philipp at COTA for the Supercup race, where he showed me his dedication and speed in the car, and when it came time to look for additional drivers for the 24-Hour he was on top of the list," Snow continued. "It will be nice to drive in the same car with him and work a little closer regarding the data and setup of the car.

"I am very excited to be able to work with both Brumos and Philipp," he concluded. "The Roar will be a great time for us to get to know one another and all mesh together so that when we come back for the race everything goes as smoothly as possible."

"I think that anyone who knows anything about racing and racing in the United States would be as excited as I am to have their name associated with Brumos," said Heylen, a native of Belgium who resides in Tampa, Fla. "Its heritage and long-time partnership with Porsche combined with Wright Motorsports' experience will make for an even stronger, more competitive team than we had in 2014."

The races will be televised on FOX Sports.

On Jan. 9-11 the team will participate in the Roar Before the Rolex 24, a pre-season test at Daytona.