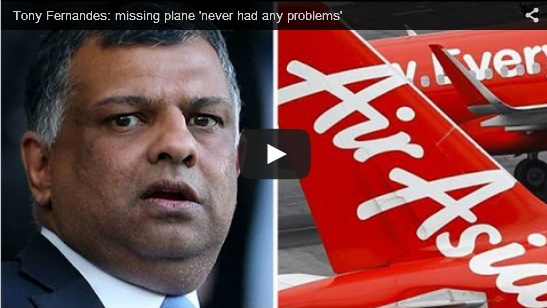 An astonishingly tragic year for air travel in Southeast Asia turned worse Sunday when an AirAsia plane carrying 162 people disappeared over stormy Indonesian waters, with no word on its fate despite several hours of searching by air and sea.

AirAsia Flight 8501 vanished in airspace possibly thick with dense storm clouds, strong winds and lightning on its way from Surabaya, Indonesia, to Singapore. Searchers had to fight against heavy rain. The Malaysia-based carrier's loss comes on top of the still-unexplained disappearance of Malaysia Airlines Flight 370 in March and the downing of Malaysia Airlines Flight 17 in July over Ukraine.

At the Surabaya airport, shocked family members pored over the plane's manifest, crying and embracing when they learned the news. Nias Adityas, a housewife from Surabaya, was overcome with grief when she found the name of her husband, Nanang Priowidodo, on the list.

Nearly all the passengers and crew are Indonesians, who are frequent visitors to Singapore, particularly on holidays.

The Airbus A320 took off Sunday morning from Surabaya, Indonesia's second-largest city, and was about halfway to Singapore when it vanished from radar. Djoko Murjatmodjo, Indonesia's acting director general of transportation, said there was no distress signal from the cockpit of the twin-engine, single-aisle plane.

The last communication between the pilot and air traffic control was at 6:13 a.m. (2313 GMT Saturday), when the pilot "asked to avoid clouds by turning left and going higher to 34,000 feet (10,360 meters)," Murjatmodjo said. It was last seen on radar at 6:16 a.m., and a minute later was no longer there, he told reporters.

Indonesia, Singapore and Malaysia launched a search and rescue operation for Flight 8501 near Belitung island in the Java Sea, the area where the jetliner lost contact with ground traffic control about 42 minutes after taking off from Surabaya.

"We hope we can find the location of the plane as soon as possible, and we hope that God will give us guidance to find it," Murjatmodjo said.