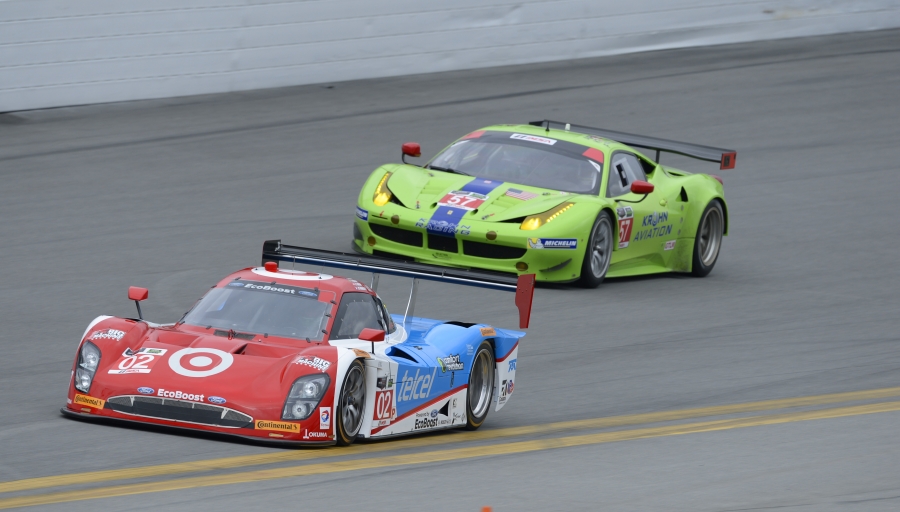 Seven-time IMSA Champions and five-time Rolex 24 At Daytona Winners Chip Ganassi Racing with Felix Sabates (CGRFS) announced today the fielding of two Prototypes for the 2015 Rolex 24 At Daytona, featuring eight drivers that represent some of the best talent the motor racing world has to offer.

â€¢ Scott Dixon: Dixon has been a permanent fixture at CGRT for 13 years and has been on the Rolex 24 At Daytona roster for CGRFS since the team's inception in 2004. The three-time Verizon IndyCar Series Champion (2003, 2008, 2013) and 2008 Indianapolis 500 Winner was a part of the 2006 Rolex 24 At Daytona winning team for CGRFS and placed second in 2011. Dixon holds the distinction of being the winningest active Indy car driver with 35 victories, which ranks him in a tie for fifth on the all-time list with Bobby Unser.

â€¢ Tony Kanaan: The 2013 Indianapolis 500 Winner, 2004 Verizon IndyCar Series Champion and 17-time race winner, Tony Kanaan, joined CGRT for his first season with the team in 2014. Kanaan is the all-time Indy car leader in consecutive starts with 233 consecutive starts dating back to the Portland race in 2001. He has 118 top-five finishes, tying him for ninth on the all-time list with Rick Mears and Helio Castroneves. In 2004, he became the first driver to complete every possible lap in a season en route to winning the championship. The 2015 Rolex 24 At Daytona will mark Kanaan's second race with CGRFS after competing with the team in 2014.

â€¢ Kyle Larson: The 2014 NSCS Rookie of the Year Kyle Larson will join CGRFS for the second time at the Rolex 24 At Daytona after competing last year alongside teammates Dixon, Kanaan, and Dario Franchitti. As a NSCS rookie, Larson had 36 starts, seven top- five finishes, 14 top-10 finishes, two pole awards, and led a total of 48 laps.

â€¢ Charlie Kimball: Verizon IndyCar Series race winner Charlie Kimball will make his second appearance at the Rolex 24 At Daytona after being part of the winning team in 2013. Kimball made his debut in the Verizon IndyCar Series in 2011 with Novo Nordisk Chip Ganassi Racing and collected his first win in 2013 at Mid-Ohio. Throughout Kimball's four-year career with CGRT, he has 68 starts, one win, four podiums, eight top-five and 28 top-10 finishes.

â€¢ Sage Karam: The 2013 Indy Lights Champion Sage Karam joined CGRT in 2014 as a development driver and made his debut with the team at the 2014 Rolex Daytona 24 At Daytona. He joined CGRFS again at the 12 Hours of Sebring, the Six Hours of the Glen, and the Brickyard Grand Prix at the Indianapolis Motor Speedway where he helped the team move from a sixth-place start to a second-place finish. Karam ran his first-ever Indianapolis 500 in 2014 and finished higher than any other CGRT driver in ninth after starting 31st.

â€¢ Partnership Lineup: All of CGRT's drivers and primary partners (Target, Ford, McDonald's, Cessna, Novo Nordisk and NTT DATA) will be represented across the No. 01 Ford EcoBoost/Target Riley and the No. 02 Target/Ford EcoBoost Riley to form an All-Star lineup both in the car and on the car.

Chip Ganassi, Owner, Chip Ganassi Racing with Felix Sabates:
"I love this race because it is one of the few times that we are able to bring all of our drivers and partners together in one race. NASCAR, INDYCAR and IMSA drivers and partners are all represented in this unique endurance event. We have had the good fortune of having success in this event which is the result of a lot of hard work by the crew, talent behind the wheel and at some level, a little luck. But I think the best thing about the Rolex 24 is that it is the first event of another season. I can't wait."