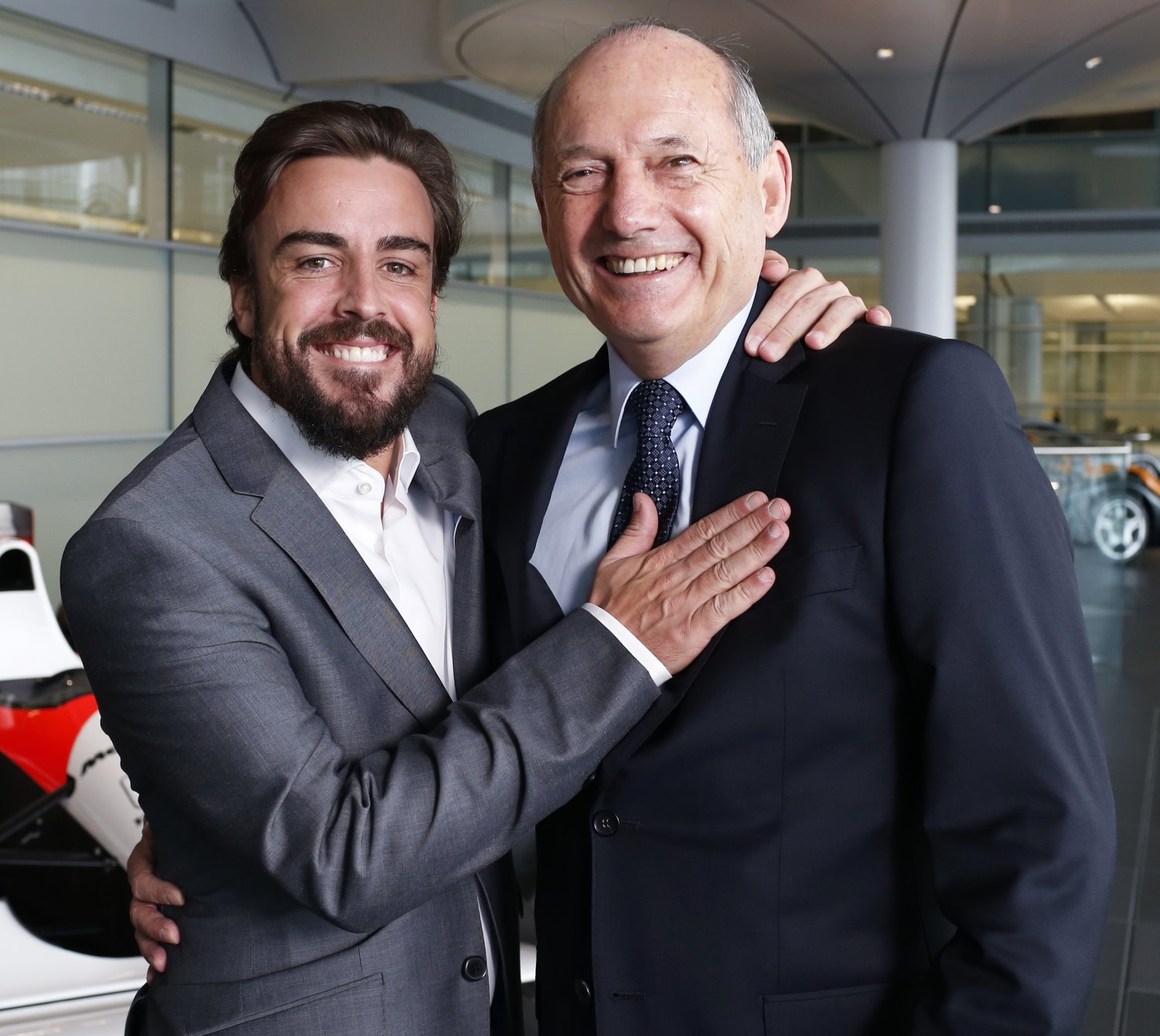 Joining McLaren-Honda shows huge belief and commitment. Could you talk us through that the process that brought you to your decision, and tell us what it was that persuaded you McLaren-Honda was the best team?

First of all, I have to say that my first go kart was a McLaren Honda replica, I was three years old. When it was announced this partnership was coming back together last year it was already quite attractive option. It was a tough decision for me, leaving Ferrari which is obviously quite an important step for any driver's career. But I joined this project because it is the one I believe can give me the best results and a third world championship. I visited the factory in Japan and the McLaren factory and I saw enough things to give me the necessary trust and confidence that many good things will come. Obviously this started one and a half years ago, so I have to say thanks also to Martin Whitmarsh, to Eric [Boullier], to Ron [Dennis], to Yasuhisa [Arai] for all their convincing conversations. I am extremely happy already to be part of this partnership. Now it is time to work; hopefully we can bring back some good results as soon as possible.

Honda are coming back from a six-year absence, and you'll be working with them to get that success. How long a road do you think it is going to be before you have the car underneath you to take the checkered flag in first?

I think we have to be realistic: we have to be confident, because we have all the resources and the technical people that can put us on a very competitive position, but we have to be realistic at the same time. Last year was not super competitive for McLaren, 2015 will be the first races for Honda with very technologically complex power units, so I think we have to put together step by step. It is difficult to say when we will be competitive enough to win, but everyone has to be sure that we will give 100 percent commitment and determination to achieve it as soon as possible. I think we can do it: there are already signs that things are moving in the right direction.

You drove for McLaren before of course, and you have been part of the DNA. Do you agree with Ron that there is some unfinished business to attend to?

That's 100% right. I found that I had unfinished business already when I left. I brought the number 1 to the cockpit from Renault in 2007 and now I want to bring back the number 1 to the McLaren cockpit but from the inside driving for them. It's something that I want so much because I achieved some good things in my career with titles and not even winning races in the past years some good reputation and respect from everybody. But there was still one thing that was not right, it was always the 2007 experience and now we will put this in place as well.

A quick word about the men who will be working alongside you, Jenson Button and Kevin Magnussen. They are going to be a pretty good couple of guys to have alongside you aren't they?

I am looking forward to working with them. Obviously I know Jenson for many years, he is a true gentleman and a great sportsman, very professional and committed. And I think with the experience we both have we can help Honda with the first steps of their power unit. Together with Kevin – the best rookie last year – sure we will help the team and learn from each other: from the speed, the experience, I think we have a very strong team. And with young drivers for the future always brings fresh ideas and opens your eyes sometimes. I am extremely happy. The other teams should hopefully be worried.

Fernando, it is no secret that you had quite a poor relationship with Ron back in 2007. How hard was it to rebuild that, and what gives you the confidence you are not going to run into similar problems again?

From 2007, with the years, things a little bit exaggerated. It was not the best feeling in 2007. I arrived with good motivation and we fought for the championship but in the end we split for different reasons. But as I said before, all those years I had only one feeling remaining to do: I was happy with everything I had done apart from 2007. I didn't achieve, didn't deliver, the best of myself. So now seven years later, more mature, you learn things and understand things probably you didn't at 25 years old, and now I arrive to finish this job I started in 2007. This was the first priority to come back. Ron and I have spoken a lot during the year, we have been together for some dinners and I want to say some hotel rooms but it sounds very bad (laughs). And you know, we both understand ultimately that we both are extremely competitive, we love motor racing – so much that sometimes we didn't agree. But as I said, when you are 25 you think differently.

You have to be honest with yourself – as long as you are, you think back and learn from the things you did. It is time to think of the future, and to be happy and competitive. That is what we want from this partnership. The other side, it is no longer 2007: it is not McLaren Mercedes, it is McLaren Honda, which is a completely different thing in my opinion. Jenson is not Lewis [Hamilton], which is completely different, and I am not the same as 2007. I had two years on my contract if I wanted at a very fantastic atmosphere. I am sitting here, ready for this challenge with McLaren Honda, because I see no problems at all. I see this as a winning project: that is very clear.

It could seem like a risk coming to McLaren: they haven't won a race for two years, and the Honda engine is as yet unproven. What convinced you this was the right place to come to search for that third world title?

I think in F1 there is not a mathematical formula for belief, but there are some feelings that put you in one or other direction and I think this was very important to see the commitment from Honda in Japan, the factory and facilities there are quite impressive. I think the new guys coming to McLaren, the technical staff, were quite important also in my decision. And I think the McLaren Honda name and partnership is something that in my case I grew up with this partnership on television. Then you become a professional race driver, drive through different formulas and then arrive in F1 and one day see McLaren Honda come back after 23 years and they have interest in you driving their new project…you jump in, simple as that.

You've made it clear you don't expect to win the championship in 2015, but what level of performance will be enough?

We can never say we will not win the world championship, who knows. But as I said we have to be realistic, knowing that the deficit on the chassis side was important I think for McLaren this year, and the power unit is something we need to put in place and get experience [with]. Hopefully we can get everything right from the first race but you never know. The 2014 cars show us how complex is this F1. But we will see. I think a reasonable level of competitiveness will be to fight for podiums, hopefully to win races in 2015, that will be a good sign for our future. We will see how things develop, because if we can manage to have a good winter, have a little bit of luck… we saw even this year the big advantage Mercedes had, and we didn't know if [Daniel] Ricciardo could fight for the championship until the end. So I think we have to put us in a good position, a competitive position, and after that it is up to Jenson and me as well to construct something.