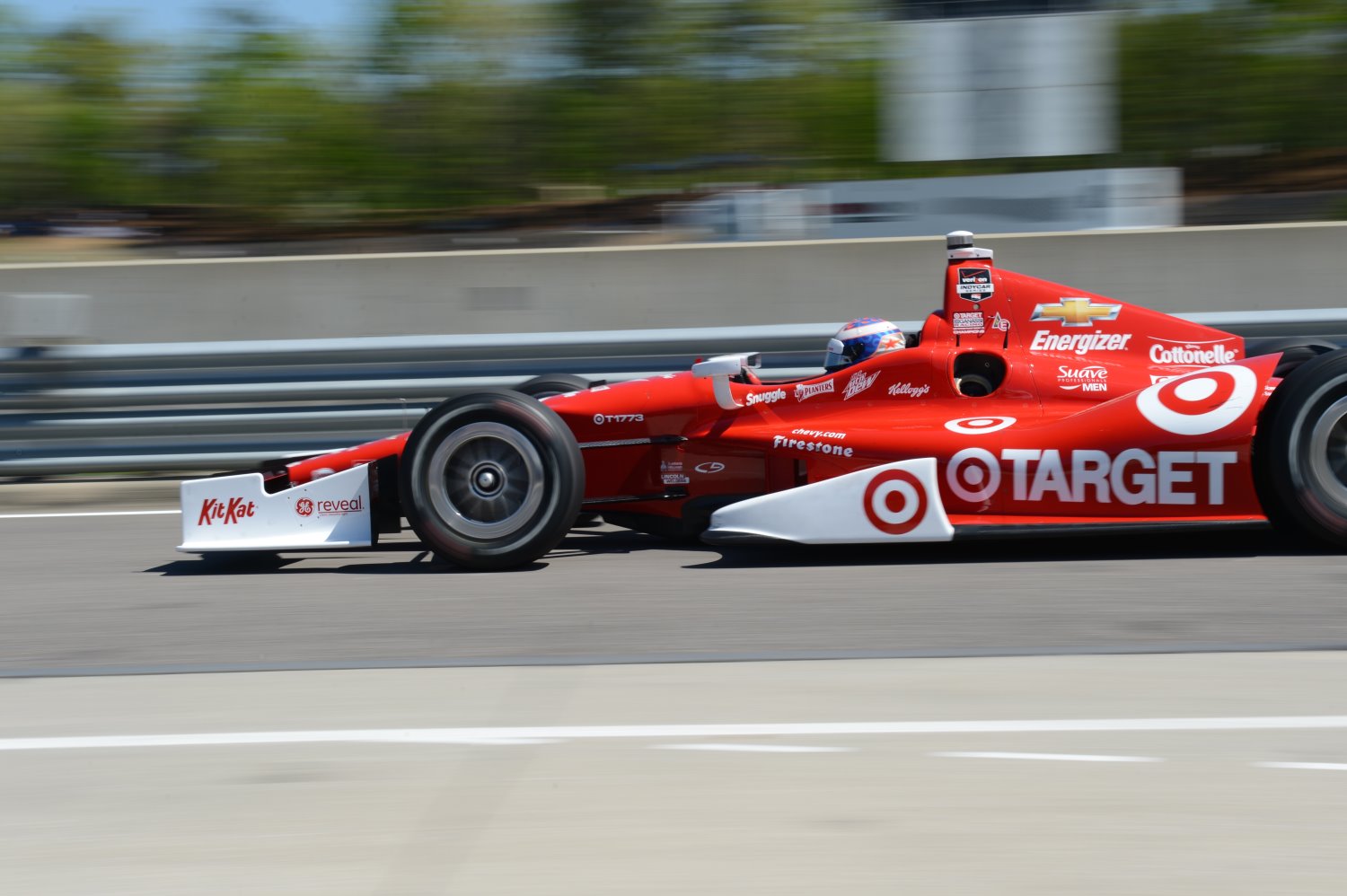 Three-time IndyCar champion Scott Dixon will return for a 14th season with Target Chip Ganassi Racing, though he will be one of only two drivers piloting the red and white bulls-eye cars next year.

Target will go from two sponsored IndyCar entries to just one in 2015 as the retailer shifts spending to promoting its drivers. Target also sponsors Kyle Larson, who just wrapped up NASCAR's top rookie honors in the Sprint Cup Series.

"We are just reallocating dollars, there's no difference in anything else," said Dan Griffis, vice president of experiential marketing and alliances at Target. "I would put our investment in racing as the only full-time sponsor in both IndyCar and NASCAR, against any other sponsor in the sport."

Ganassi and Target celebrated their 25th anniversary this year. The partnership began in open wheel, eventually grew to the sponsorship of two IndyCar entries, and expanded into both NASCAR as a primary sponsor and sports cars as an associate sponsor.

"You don't know how fortunate I feel to begin another season partnering with Target in both IndyCar and NASCAR," Ganassi said Tuesday.

"They have been far more than a partner for a very long time and have been so committed to the sport of auto racing. I am also very much looking forward to their new marketing campaign that supports the racing program. I know it will be fantastic." More AP Story

12/09/14 Although Target is down to sponsoring only one car in 2015, we hear the team will field a 2nd car for Tony Kanaan with a different primary sponsor.

12/08/14 After completing its 25th season of partnership in 2014 by winning three of the last four races of the Verizon IndyCar Series season, Target Chip Ganassi Racing (TCGR) announced today its driver for the 2015 campaign. Three-time Verizon IndyCar Series Champion and 2008 Indianapolis 500 Winner Scott Dixon returns to TCGR in the No. 9 Target Chevrolet for his 14th season with the team – the longest tenure for a driver in the organization's history.

Scott Dixon and Team Target: Scott Dixon moved into a tie for fifth with Bobby Unser on the all-time Indy car wins list with 35 after posting two victories and finishing third in the championship last season. All but one of his 35 victories have come as a member of Team Target. Four-time Indianapolis 500 winner Al Unser is next on the list with 39 career wins. TCGR is a 10-time Verizon IndyCar Series Champion with 96 victories, 83 pole positions and four wins in the Indianapolis 500. Target will also return to the NASCAR Sprint Cup Series (NSCS) with Kyle Larson and the No. 42 Target Chevrolet SS for their 14th consecutive season with Target Chip Ganassi Racing with Felix Sabates as a primary partner in the series. Target is the only brand to be a full-time primary sponsor in both the Verizon IndyCar Series and the NSCS.

Statistically Speaking: The New Zealander placed third in the Verizon IndyCar Series standings in 2014. He won the championship in 2013, 2008 and 2003, and has finished in the top four of the standings the past nine seasons. Dixon extended his streak of seasons with a victory to 10 last season and has at least one pole position in eight consecutive seasons. He moved past Al Unser for fifth on the all-time second-place finishes list with 32 in 2014, and with 175 consecutive starts he is positioned to tie Al Unser Jr. for third in 2015.

Dan Griffis, Vice President, Experiential Marketing & Alliances, Target: "Target is proud of our 25-year partnership with Chip Ganassi Racing and we look forward to a successful season in 2015. In addition to sponsoring cars in both INDYCAR and NASCAR, we will be increasing our digital and broadcast support of the motorsports program. The new marketing initiatives will allow Target to remain one of the most recognizable brands in each series, both on and off the track. We look forward to sharing more details about these exciting plans with our loyal fans in the coming weeks."

Chip Ganassi, Owner, Chip Ganassi Racing Teams, Inc.: "You don't know how fortunate I feel to begin another season partnering with Target in both INDYCAR and NASCAR. They have been far more than a partner for a very long time and have been so committed to the sport of auto racing. I am also very much looking forward to their new marketing campaign that supports the racing program. I know it will be fantastic. Lastly, it will be great to see Scott Dixon back as the Target driver in the No. 9 car. He is such a talented driver that has quietly crept his way onto the list of all-time greats. 2015 can't get here soon enough."

Scott Dixon, Driver, Target Chip Ganassi Racing: "Although we finished 2014 strong, we didn't have the year we wanted to, at least not by our standards. I know the Target team is focused and ready to go for 2015 and I'm honored to be back driving the No. 9 again for the team. It's really hard to believe this is my 14th year with Target Chip Ganassi Racing – it seems like only yesterday I was making my first start for them way back in 2002! The relationship the team has with Target is a true partnership in every sense of the word, and that's why I am so proud to wear the Target firesuit."