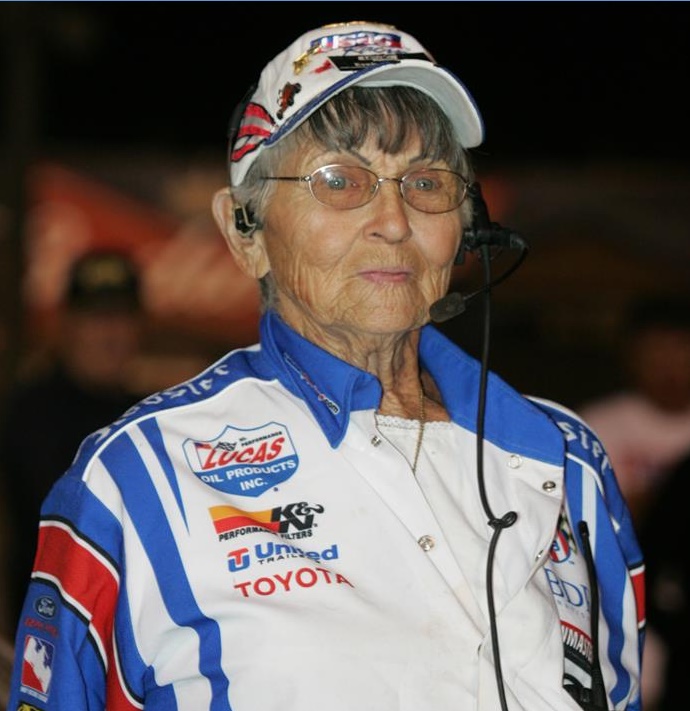 Longtime and loved Southern California racing official Evelyn Pratt has passed away in Texas. She was 95-years-old. In a career that spanned more than 65-years in racing, she not only served as a race official, but was also a racer herself in the Ascot Powder Puff Class.

"Evelyn’s passing is being felt and mourned throughout the racing world," said saddened Perris Auto Speedway promoter Don Kazarian early on Saturday morning. "She was the hardest worker in all of motorsports. She was a pit steward with the original CRA, SCRA and up until a couple of seasons ago with USAC/CRA. Evelyn performed her job with diligence and pride.

She was firm, but fair. Down through the decades she was involved with the greats in the sport all the way down to the little guy who had never been on the track before and she treated them all the same. When a driver needed a scolding about conduct on the track or in the pits, she was would deliver it in a stern manner so he would understand. And, if that same driver needed some understanding later that night, she would be the first one to throw an arm around him and talk to him."

Evelyn's famous bull horn is in the National Sprint Car Hall of Fame in Knoxville, Iowa. Even without it being there, she was known across the country.

"She knew everybody and everybody knew her," Kazarian said. "She was a joy to be around and certainly one of a kind. In all of my years in racing, I cannot think of another person more loved than Evelyn. Everybody just loved her. That is evidenced today by the amazing amount of tributes pouring in on her all over social media. She was a part of everyone’s life and she will be missed by one and all."