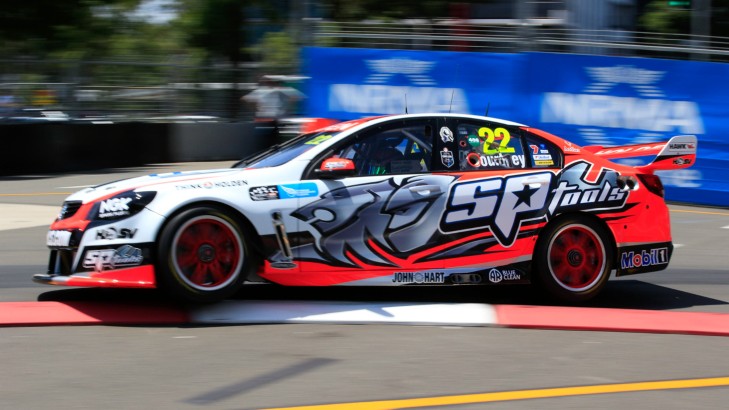 James Courtney has a point to prove on the streets of Olympic Park as the Holden Racing Team dominate the first day of the Sydney NRMA 500.

Penrith-born Courtney has been slowly driving a HRT revival this year along with team-mate Garth Tander and today the pair made the first statement of the grand final.

They were 1-2 on the opening day with Walkinshaw Racing stablemate Tim Slade in the third of the four Holden Commodores that race out of the same garage.

Former Champion Marcos Ambrose had a day of settling back into his new environment, running towards the rear of the field as he slowly adapts to the sport he left nine years ago.

Ambrose came home in position 23, which was above Mark Winterbottom who struggled in the final session for pace.

"It has been a great day for us really. I have just taken my time with it today, but we will know where we stack up really tomorrow when we bolt on new tires," Ambrose said.

"I am really enjoying it and feel a lot better at the end of the day than I did at the start. So, we will just keep chipping away and get the experience I need.

"The series is at very elite level with the drivers and teams. I am going to use this time to really dig deep and work on some techniques, clean up some bad habits from NASCAR and hopefully by Sunday afternoon we will be competitive and getting after it.

"I just want to be in the middle of the pack and keep learning all weekend."

For Courtney Sydney is a bittersweet venue that has seen him with a race victory in 2009 and a Championship crowning in 2010 but some heartbreak as well. But of the entire field he as many podiums as anyone in the concrete jungle.

He missed last year's event after he broke his leg in a heavy accident at Phillip Island.

While it is early days Courtney, like everyone, wants to get one up on six-time Champion Jamie Whincup to close the season after another dominant year from the all-time best.

"I love it, I'm a westy – I was born at the hospital just down the road, it's heartland for me and I feel at home out here. It's good," Courtney said.

"There's still a few little areas that I can clean up my act and also tune up the car a little so I don't think it's going to be this easy for the whole weekend – not that it was easy today.

"I think the other guys are going to be fighting back pretty hard tomorrow. We're relatively happy for how it went today I think it's great for the team and the team morale – we've had a pretty tough time of late and to be up here – all three of us – is fantastic for not only us but for everyone involved."

Courtney's 1min28.121 lap around the Sydney street circuit was just 0.04sec quicker than teammate Tander, who has also been victorious at the savage street track.

The two split one win apiece in 2009, though Courtney then raced for Dick Johnson Racing.

Champion elect Whincup was 11th in the final session, with teammate Craig Lowndes 14.