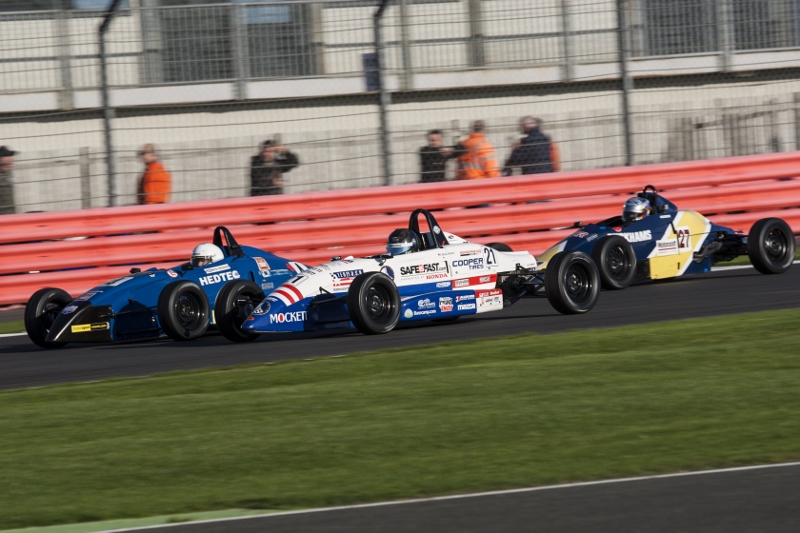 Silverstone, England – The first day of action at the 14th annual Walter Hayes Trophy Formula Ford weekend brought a steep learning curve for Team USA Scholarship drivers Aaron Telitz and Michai Stephens. Both displayed impressive form, with Telitz qualifying on pole for his Heat race before falling victim to a rival's overzealous move on the first lap, while Stephens drove a strong race to finish fourth.

Perfect weather conditions greeted the 117-strong contingent of Formula Ford cars and drivers this morning, but the track remained treacherously damp for the opening qualifying sessions. Telitz, 22, from Birchfield, Wis., was the first Team USA driver in action, in Heat Three, alongside expected front-runners Ciaran Haggerty, who is mentored by fellow Scotsmen Dario Franchitti and Ryan Dalziel, plus three-time WHT winner Joey Foster and 2014 BRSCC Formula Ford champion Stuart Gough. Telitz ping-ponged between third and fourth place for the majority of the all-too-brief 10-minute session before vaulting to the top of the charts on his final lap. Pole was his.

An hour or so later, Stephens was content to pick up experience and make sure not to make any mistakes. He learned a lot from running with current British Formula Ford Champion Jayde Kruger, from South Africa, and fellow former champion – and USF2000 race winner – Wayne Boyd to qualify sixth fastest for Heat Four.

Telitz learned first-hand how intense is the competition in UK Formula Ford racing when he lost a couple of positions on the first lap, then was punted into a spin by experienced campaigner Ben Mitchell, forcing him out of the race.

"The track was still really damp and slippery when I went out for qualifying but I made the most of it and set the fastest lap on the last lap so that was awesome to start on pole," said Telitz. "I have been on the front row every race so far, but I think that is going to change after you hear the rest of this! I had an OK start and was side-by-side for basically the whole first lap, and then exiting Brooklands I just got run over from behind. The car is good to go for tomorrow so I have to put my head down and drive through the Progression and Last Chance race and do as well as I can in the Semi-Final."

Stephens made a strong start to Heat Four, vaulting to third on the first lap before being bundled back to fifth. As the first three were able to edge clear, Stephens fought his way past Ed Moore and Jonathan Hoad to finish fourth.

"Qualifying was in the damp in some of the trickiest conditions that I have ever come across so far," said Stephens. "I qualified sixth and got up to third or fourth, and just battled my way around the circuit. I came across a couple of good fellas out there that again taught me a lot about the racecraft. I managed to bring it home in fourth position and just had a great day with the sun shining."

Live timing and scoring tomorrow will be available at http://www.mstworld.com/timing/livetiming.htm?series=hscc.