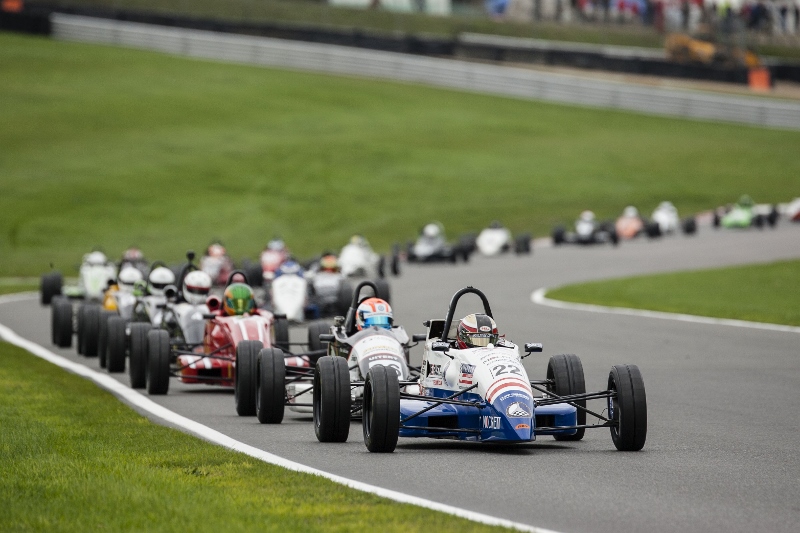 Brands Hatch, England – Aaron Telitz claimed two victories for the Team USA Scholarship and Cliff Dempsey Racing at this weekend's 43rd annual Formula Ford Festival at Brands Hatch, but fell short of the ultimate prize when he spun into the gravel trap while challenging for the lead in the Final.

Teammate Michai Stephens, 22, from Evanston, Ill., once again was struck by misfortune in his Semi Final race this morning and was unable to qualify for the Final. Stephens had driven impressively to work his way from 25th on the grid to 12th, only to be forced off the road when veteran driver Rick Morris made a rare mistake while Stephens was in the process of passing him around the outside at Clearways.

Telitz, 22, from Birchwood, Wis., put on another clinic during his Semi Final round. He made an exemplary start from the pole and led all 15 laps to ensure a place on the front row of the grid for the 20-lap Grand Final. He had to be content with the outside position, due to the fact his Semi Final had been interrupted by two Safety Car periods which ensured a slower average speed than Semi Final 2. Undeterred, Telitz made a good start and immediately began to pressurize race leader Jonny McMullan.

On Lap 4, Telitz carried more momentum onto the Brabham Straight and drafted to the left of McMullan on the undulating approach to the first corner, Paddock Hill Bend. The pair ran side-by-side toward the apex of the turn, whereupon Telitz's car just got away from him and he performed a lazy spin into the gravel trap, from which there was no escape.

"Today in general was pretty good," said Telitz. "I was on pole for my Semi Final, had a good start, a clean race, managed a couple of Safety Car periods really well and ended up starting off-pole for the Final based on total time from the two Semi Finals. Then I made good another good start. I battled for the lead into the first corner but couldn't quite do it and then was just sizing up first place and had a good run on him down the front straightaway and made a move on the outside into Paddock Hill Bend. Unfortunately, I lost it under braking, got into the marbles, and out into the gravel trap I went. So, end of the Festival for me but it was awesome to make it to the Final and to do so well on my way there. To be as competitive as I was on my first time racing over in England was really special. So, even though it ended with a bang – and not a good bang – I was OK with the weekend and want to thank everyone who makes this Team USA Scholarship program possible."

Telitz and Stephens will now regroup and return to action on Thursday at Silverstone for two more days of testing prior to next weekend's Walter Hayes Trophy event for which over 100 Formula Ford cars are currently entered.