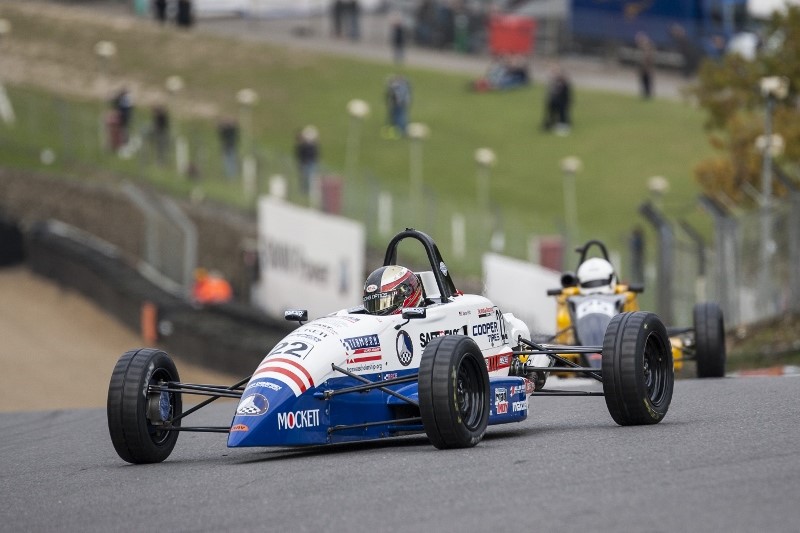 Team USA Scholarship driver Aaron Telitz ensured an almost perfect start to his European foray by qualifying on pole and winning his Formula Ford Festival Heat race today at Brands Hatch. The sailing was less smooth for teammate Michai Stephens, whose speed was compromised by some difficulties during both qualifying and the race, meaning he will have to work his way from the back in tomorrow's Semi Final race.

The track was still damp when Telitz ventured out for qualifying, but the 22-year-old from Birchwood, Wis., made light of the conditions and immediately jumped to the top of the charts in his #22 Cliff Dempsey Racing Ray GR09. He remained unchallenged throughout the 15-minute session to secure the pole for his Heat race.

Ninety minutes later, Stephens, from Evanston, Ill., was working his times down nicely when a slower car cut across his nose on the Brabham Straight, causing Stephens to take evasive action as his rival made heavy contact with the pit wall. After two red-flag stoppages, Stephens had to be content with the seventh fastest time.

Heat One saw Telitz beaten away from the start by Irish veteran Noel Dunne. Telitz was soon back on terms with his rival before slipping through into the lead with a neat maneuver under braking for Clearways. He extended a clear advantage, only to see CDR stablemate James Raven loom large in his mirrors as the Englishman made up for a mistake in qualifying. Telitz once again put his head down to ensure the gap remained at around one second. The victory was his.

"It was so cool to get a win in my first race in England – out of America, actually – so that was super-awesome," he said. "I need to work on my start a little more. Too many revs, too much wheelspin and I got passed by Noel Dunne. I held it together, didn't lose any more spots, gathered myself up and got a run at him into Clearways and made a nice clean pass and then managed the gap from there. I'm looking forward to tomorrow. The pace is great, the racing's a lot of fun – the guys are aggressive and clean though, which is nice – that might change tomorrow, we'll see! – but it was great."

Heat Two wasn't quite so straightforward. Stephens lost one position at the start, then was bundled back one more place following a mid-race caution period. His day ended shortly thereafter when he spun at Surtees on some oil and was unable to restart the car when the starter motor failed.

"It was another insightful day," said Stephens, "one which brought to light a lot of aspects to racing, including the importance of thoroughly knowing the rules in a different country. At the restart I was under the assumption that you had to make it to the start/finish line before you're allowed to pass, and that was not the case, so I lost a place right there. I'll make sure that doesn't happen again. Then going into one of the corners there was some oil down and I was the gofer there – I saved everybody else's and then the brooms and the oil-dry came out and cleaned it all up!"