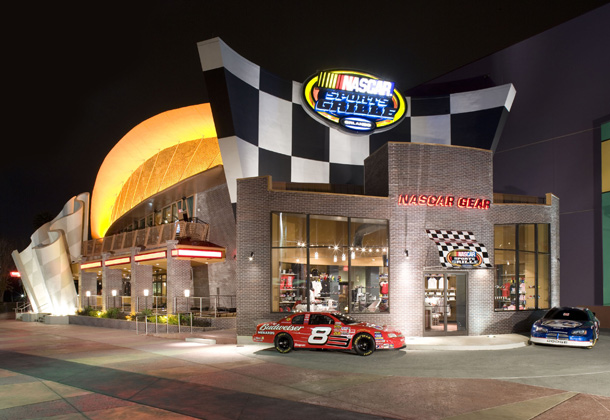 With racing on a decline in the USA because of its aging fan base, NASCAR Sports Grille, a mainstay at Universal CityWalk since the entertainment complex opened in 1999, will close Nov. 1.

The racing-themed restaurant, which serves American-style food such as burgers, ribs, sandwiches and pasta, will continue lunch and dinner service through that date.

Universal Orlando employees recently were told of the closing. No replacement has been identified.

The restaurant "has been a big part of helping CityWalk grow and establish itself as an entertainment destination," Universal Orlando spokesman Tom Schroder said Sunday. "This change is part of our ongoing commitment to bring new entertainment experiences to CityWalk."

The 530-seat restaurant, which originally went by the name NASCAR Cafe, is located on the north end of the complex. It's the last outlet that visitors using Universal's parking garage pass if they are heading to Universal Studios theme park, home of the new Wizarding World of Harry Potter — Diagon Alley.

The concept was a joint project of NASCAR and the Cordish Co., based in Baltimore. The restaurant includes a retail outlet that specializes in NASCAR gear and souvenirs. An additional NASCAR Sports Grille operates in Hampton, Va.

Universal is in the midst of revamping its dining options at CityWalk. New operations include Red Oven Pizza Bakery; Vivo Italian Kitchen; Antojitos, a Mexican place that took over the Latin Quarter space; Hot Dog Hall of Fame; a larger Starbucks location; and the Bread Box. The Cowfish, a small burger-and-sushi chain based in North Carolina, is expected to open this year. Construction workers were at the Cowfish site on CityWalk's second level on Sunday.