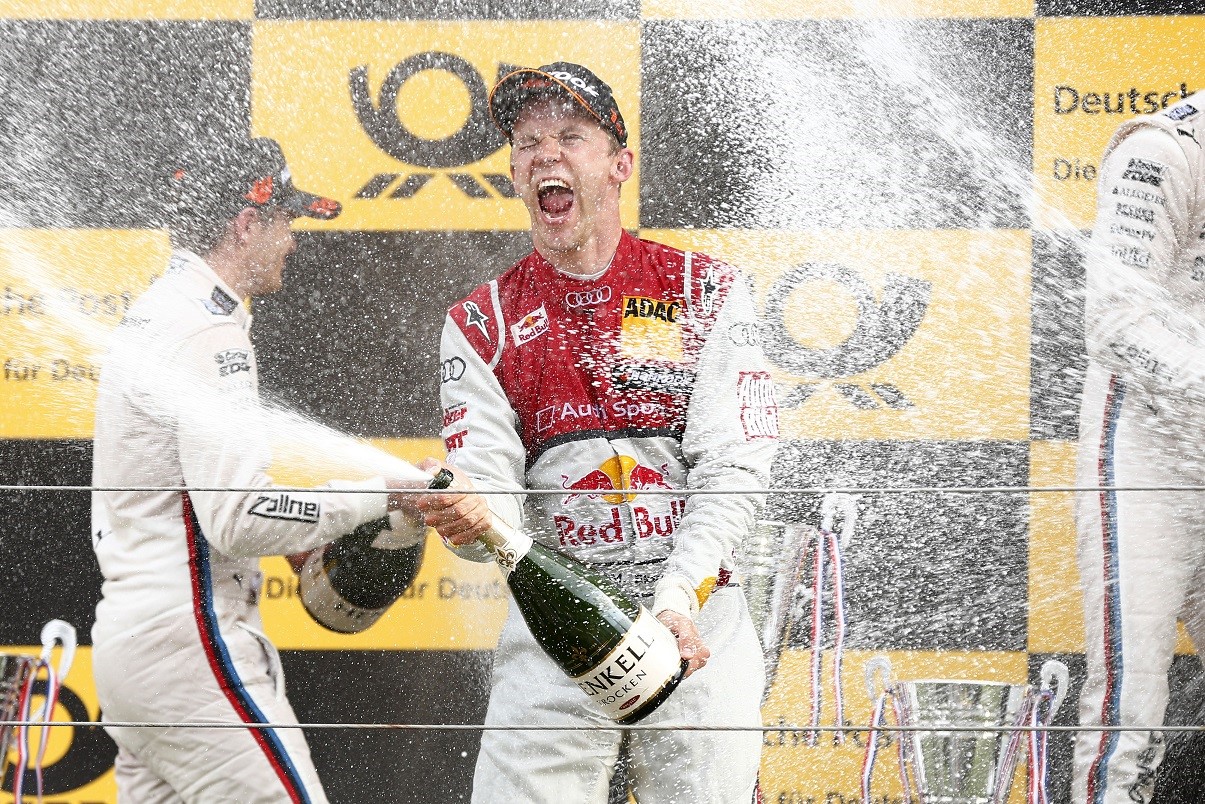 Swede Mattias Ekstrom was victorious in the ninth season round of the DTM at Zandvoort in The Netherlands and thus secured the first victory for Audi this season. In a thrilling closing stage of the race, the 36-year-old worked his way up through the field in an impressive way and claimed the lead. The two times' champion finished ahead of the newly-crowned champion Marco Wittmann and Martin Tomczyk (both BMW), who were second and third respectively. "In the DTM, racing is always extremely hard and today was no exception. After all the bad luck of the past months, now, things were running perfectly for us at last. I enjoyed every lap of this race," said a delighted Ekstrom after scoring his fourth DTM career win at Zandvoort.

Marco Wittmann, who claimed the championship title in the Lausitzring round, was in contention for victory for a long time. Having started from second place, the German already took the lead in the first corner. Eventually, however, he didn't have a chance against Ekstrom, who got maximum benefit from his soft option tires in the closing stages of the race. "This wasn't an easy race for us as there were plenty of incidents. Initially, I had a perfect start, but our option tires degraded more quickly than we had expected. In spite of the chaos on the track, my team always made the right decisions and called me into the pits at the right time," Wittmann said after the race. Martin Tomczyk was also delighted after his first podium finish since August, 2012.

Mercedes-Benz driver Christian Vietoris was involved in a battle for fourth with Edoardo Mortara until the end of the race, but didn't find a way past the Audi driver. The 25-year-old was the only driver in the field to race the updated version of the DTM Mercedes AMG C-Coupe. "Fifth place is a very good result. At the end, I even had the chance to challenge for a podium finish. Many thanks to my team for preparing my new car in the past week," the German commented.

With his BMW M4 DTM, Maxime Martin finished sixth and thus contributed to the early title win for the BMW Team RMG in the teams' standings. After winning the drivers' title with Marco Wittmann, this is already the second title for Stefan Reinhold's team. The battle for runner-up spot in the drivers' standings remains thrilling. Thanks to his first win of the season, Mattias Ekstrom has moved up to second place in the points' standings. Prior to the final round, the Swede has 81 points. Christian Vietoris and Edoardo Mortara (Audi RS 5 DTM) are only a few points behind. In the battle for the manufacturers' title, everything is also still open between BMW and Audi.

Several accidents and crashes made their mark on the ninth season round of the DTM at Circuit Park Zandvoort. Augusto Farfus had a big moment after a collision with Daniel Juncadella on lap 19 and landed in the gravel trap. "That was a big crash, but I am fine," the BMW driver from Brazil said. In total, the safety car was deployed four times during the race.

Traditionally, the Hockenheimring Baden-Wurttemberg will be the venue for the season finale, October 19.

Dr. Wolfgang Ullrich (Head of Audi Motorsport): "This victory was more than overdue and is good for the whole squad who worked very hard for it. It was a pretty crazy race in which a certain amount of fortune was necessary. But the Audi RS 5 DTM was simply the strongest car at Zandvoort. That was really obvious here."

Dieter Gass (Head of DTM): "Of course we're very pleased with and relieved about the victory clinched by Mattias (Ekstrom): a fantastic achievement. After receiving an unjustified penalty yesterday, he gave the right answer on track today. The race with four safety car periods today was certainly spectacular for the spectators. But I cannot condone some of the things that happened on track. I cannot understand, for instance, how it is possible that a driver hits the corner of another driver's car in a fast turn, the way (Christian) Vietoris hit Nico MÃ¼ller, and he gets away with it without a penalty."

Mattias Ekstrom (Red Bull Audi RS 5 DTM), 1st place
Tires: standard/option
"It's always nice to win a race, especially if it's been such a long time ago. We were without a victory for 14 months and this has been the first victory for Audi this year. It's a special day. We had a bit of fortune today but my car was very fast, too. It was important that I didn't lose too much time in the beginning on standard tires. Afterwards, the safety cars played into our hands."