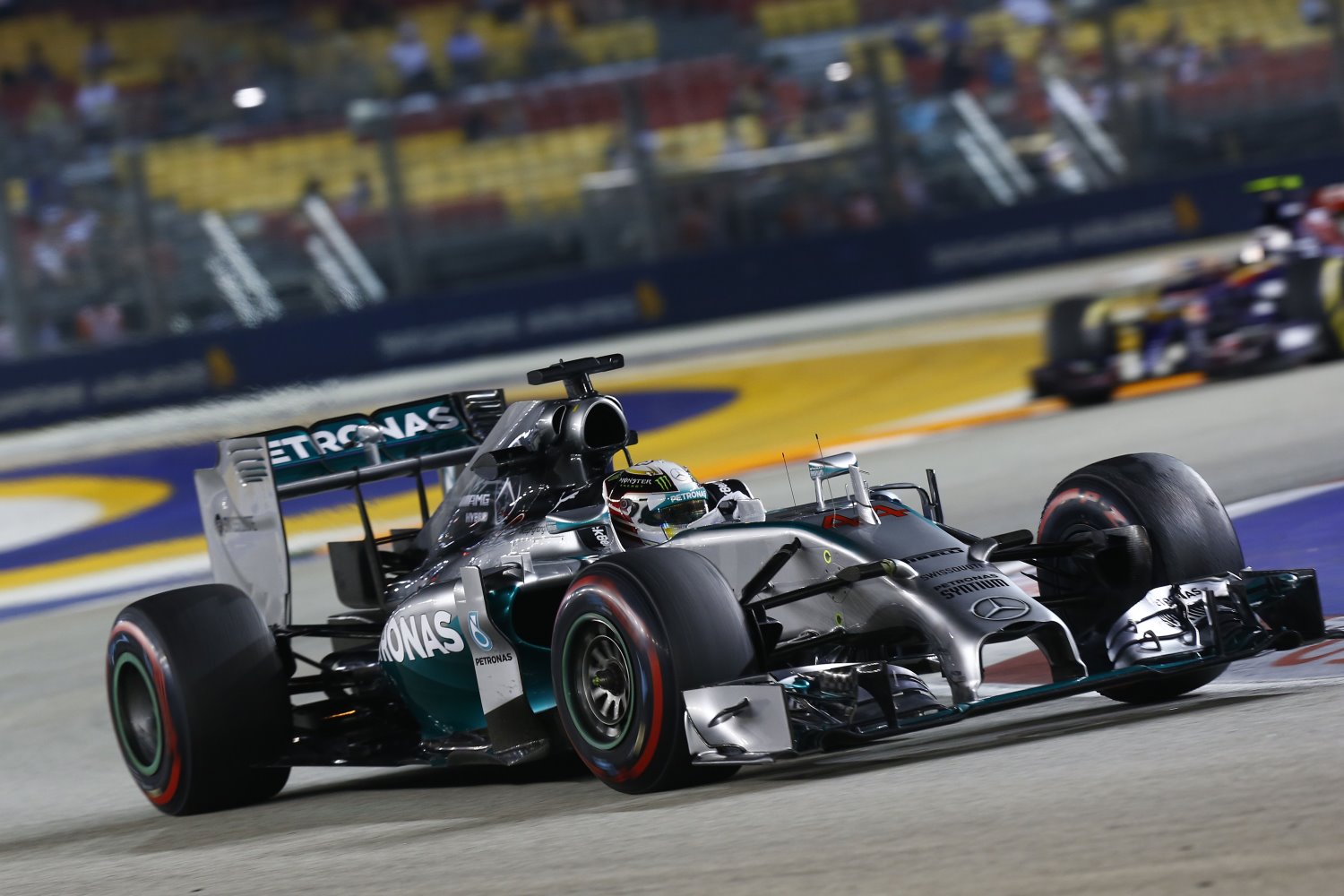 Lewis Hamilton topped the opening day of practice for the Formula 1 Singapore Grand Prix in his Mercedes. The former champion left his qualifying simulation run on super-softs later than most, and proceeded to take fast time.

Fernando Alonso got to within 0.133s of Hamilton on his simulated qualifying run, ending the session second ahead of Daniel Ricciardo.

Nico Rosberg did not try a fast lap on the super soft tires, instead opting to do race setups. This meant that his fastest lap on the harder Pirellis stood as his best, the significant performance difference between the two compounds leaving him down in 13th, just over a second-and-a-half off Hamilton.

Kimi Raikkonen was fourth, four tenths slower than his teammate.

Remarkably, Sebastian Vettel ended the session fifth having only taken to the track with seven minutes remaining. He had suffered an engine problem at the end of the day's first session, with Red Bull doing a superb job to get his car ready for a run on super-softs in the closing minutes.

Lewis Hamilton
Today was a work in progress. We made some changes between P1 and P2 and, whether it was those changes or the track itself, the balance didn't feel right. It felt like we lost a bit of performance but we'll look into the details and see what it was tonight. The long run was okay – I had a bit of traffic which wasn't ideal, as when you back off to rebuild the gap the tires come back to you a bit which may not give an accurate picture of exactly how long they will last. Pole here has always been very important. The right side of the grid, for example, always seems to get the better starts. Being up at the front will be crucial and that's obviously my target for qualifying tomorrow. Nico looks very quick, as do the Ferraris and the Red Bulls, but I'm feeling good this weekend and I'm focused on the job.

Nico Rosberg
I had a good feeling in the car. The only pity was that I had to abandon my quick lap due to the red flags. Although I didn't get the second part of that lap, though, in the first part the car felt great. We then decided to do more laps on high fuel to learn more for the race and overall it was okay. It will be difficult with tire degradation on the softer tire so we still need to work on that. But it's generally a great challenge driving here. This is one of the most difficult tracks out there but to fight through all the curves and bumps – especially with this amazing Silver Arrow – is a great feeling.

SEBASTIAN VETTEL
First Practice Session: Position: 4, Best Time: 1:49.874, Laps: 27
Second Practice Session: Position: 5, Best Time: 1:48.041, Laps: 5
Was today unlucky? I don’t believe in good luck and bad luck. I think we did a lot in the last few years that was right and we weren’t just lucky then; this year it’s a bit different and we have had some problems, but that’s part of life. We have overcome the troubles that we have had and it’s progressively getting better. In terms of pace it’s looking good this weekend. It was important to get a good feel on the supersoft tire. The mechanics were pushing hard and changed the engine in less than three hours after FP1, which is a massive job, so thanks to them that I was able to get out in the second session.

DANIEL RICCIARDO
First Practice Session: Position: 5, Best Time: 1:50.122, Laps: 21
Second Practice Session: Position: 3, Best Time: 1:47.790, Laps: 28
I’ve got a feeling Mercedes probably have a bit more in the bag. I saw Hamilton is about three tenths up the road and Rosberg was improving and then he caught the red flag or the yellow flag so I don’t know, I think they’ve got a bit more in the tank. I think we do too, but probably not enough to get on par with them yet, but hopefully a good night of homework will pay off tomorrow. I wasn’t expecting such a big difference between the tires, it just doesn’t seem the prime is working as well, the supersoft seems normal but the prime is tricky to turn on so that’s making it a bit hard. The tires are going to make a big difference in the race – to be quick on the tire is one thing, but to make it last more laps is another and that could save you doing an extra pit stop in the race.