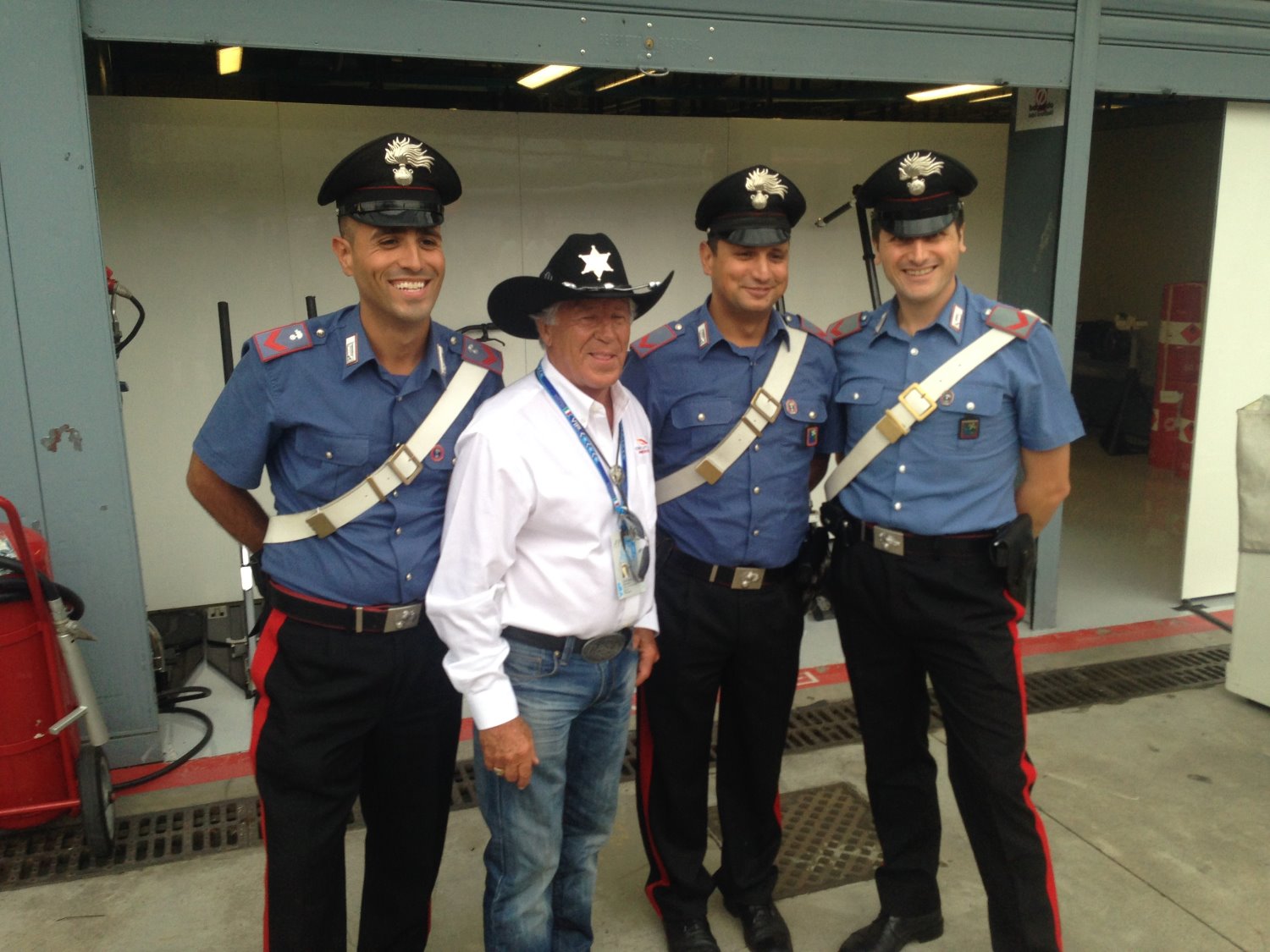 Former F1 World Champion, Mario Andretti, returned to Monza for the first time since 1983 to recruit support for the 2014 United States Grand Prix.

The Wild West and Italy have long had a strong connection, going back to the classic 'Spaghetti Westerns' helmed by the great Italian director Sergio Leone and starring his American muse Clint Eastwood who captured the public's imagination and fuelled its fascination with the American West in films such as "For a Fistful of Dollars", "For a Few Dollars More" and "The Good, the Bad and the Ugly".

With this in mind, what better time and place for the Circuit of the Americas' (COTA) chief ambassador, Mario Andretti – who himself was born in Italy before emigrating to the United States at age 15 – to bring a flavor of the American Wild West to the Italian Grand Prix.

Monza already held a lot of special memories for Andretti: he watched his first F1 race here in 1954 and in 1968 drove an F1 car for the first time at the hallowed Italian circuit before eventually winning the Formula 1 World Championship for Lotus at Monza in 1978. One of his most famous drives also took place here in 1982 when, as a late stand-in, he secured a stunning pole position for Ferrari – the last American F1 driver to do so.

However, his return to Monza for the first time in over 30 years was not only to reminisce and enjoy the warm welcome he received upon his arrival in the Paddock but to successfully complete a new mission: to get everyone talking about the third successive U.S. Formula 1 Grand Prix taking place in Austin on the weekend of October 31st – November 2nd.

While he was more than happy to recall some of his greatest memories over the course of the weekend, his main purpose was to recruit 22 specially selected deputies to the Circuit of the Americas cause. Donning his specially designed Stetson cowboy hat, the 'COTA Sherriff' patrolled the Paddock with his trademark good humor and charm, welcoming all the current F1 drivers to the upcoming 2014 United States Grand Prix in Austin. Mario presented every driver with a bespoke cowboy hat, specially designed using each team's colors, before challenging them to prove their 'Wild West' credentials by uttering some classic Western phrases. Indeed, the highlight of the day had to be Kimi Raikkonen wearing his own red, Ferrari Stetson uttering the immortal, Texan phrase: "Speak your mind, but ride a fast horse!"

With the third United States Grand Prix less than two months away and looking increasingly likely to play a deciding role in the outcome of this year's World Championship, Mario Andretti's mission to Monza provided a timely reminder to everyone that Austin is the home of the best F1 show around. Indeed, by the time America's greatest ever F1 driver left the Paddock, it was clear to everyone 'How the West Was Formula One".

Premium Tickets for the 2014 FORMULA 1 UNITED STATES GRAND PRIX at Circuit of The Americas sold out!

With the Formula 1 season having left European shores after last weekend's race at Monza, there is no better time for fans to purchase tickets for the 2014 FORMULA 1 UNITED STATES GRAND PRIX (F1 USGP) at Circuit of The Americas (COTA). This year's event takes place Oct. 31 through Nov. 2.

Premium seats at the signature Turn 1 and the Main Grandstand have already sold out, and premium grandstands at Turn 15 are expected to sell out soon.

The Turn 15 grandstands feature padded, individual seats with a great view of some of the circuit's most-demanding corners, including Turn 12, the best overtaking spot on the track. The grandstands are located a short distance from Circuit of The Americas' Grand Plaza, which features multiple concession and merchandise booths, and the Austin 360 Amphitheater, which is the site for the F1 driver autograph sessions and the free Sunday post-race concert by Kid Rock.

"The strong demand for premium seating at the U.S. Grand Prix shows that the American audience for Formula One wants the best experience possible to enjoy the weekend," said Geoff Moore, chief revenue officer at Circuit of The Americas. "In addition to premium seating, there are other options around the track, including bleachers and general admission, that offer incredible views of the on-track action."

Three-day passes for this year's F1 event start at $169 and include tickets to Friday's practice sessions, Saturday's practice and qualifying sessions and Sunday's Grand Prix. F1 USGP tickets can be purchased online at www.circuitoftheamericas.com, www.ticketmaster.com and via phone at 800.745.3000. Single-day tickets for the Austin Grand Prix are on sale now also.

This year's highlights include a robust schedule of support races, an F1 driver showcase with free autograph and interview sessions, enhanced fan hospitality areas throughout the venue, and a post-race track invasion and concert in the Austin360 Amphitheater. Fans who make their travel plans early will find more affordable hotel rooms available through COTA's online hotel booking portal, http://circuitoftheamericas.com/bookaroom.